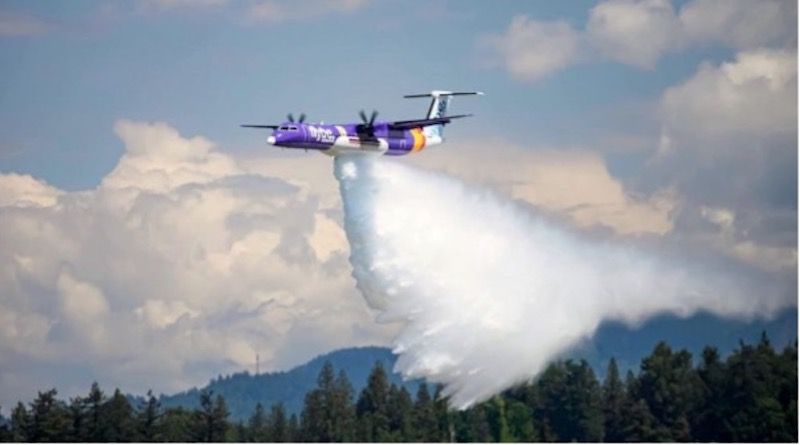 Flybe planes are set to take to the skies once more…in a new life tackling wildfires from above.

After the Channel Islands carrier collapsed amid financial turbulence exacerbated by the pandemic in early 2020, Conair seized the chance to snap up nearly a dozen of its Dash 8-Q400s.

The Canadian company specialises in converting ageing planes into aerial firefighters - sometimes described as 'water bombers' - and has supported Government agencies for more than half-a-century with its fleet of 70.

To become a water bomber, planes need at least 30 years’ life in them, and be in good enough condition to withstand the demands of fighting wildfires, which rapidly wears out their metal frames.

Sourcing planes for conversion has always been a tricky business, but one that became easier when the pandemic hit.

The downsizing and demise of many airlines as a result of covid meant that more well-maintained planes became available on the second-hand market than usual last year – including 11 from Flybe.

Excited by their condition, turbo-prop powered reliability and efficiency, Conair snapped them up in January.

While the crucial element of the conversion from airliner to water bomber - installing a tank onto the plane - might appear simple, the whole process can sometimes take years from concept to completion.

It involves stripping out between 6,500 and 7,000lbs of unnecessary weight from each aircraft. For a former passenger jet like Flybe, this will mean everything from seats to overhead lockers, and even the carpet. 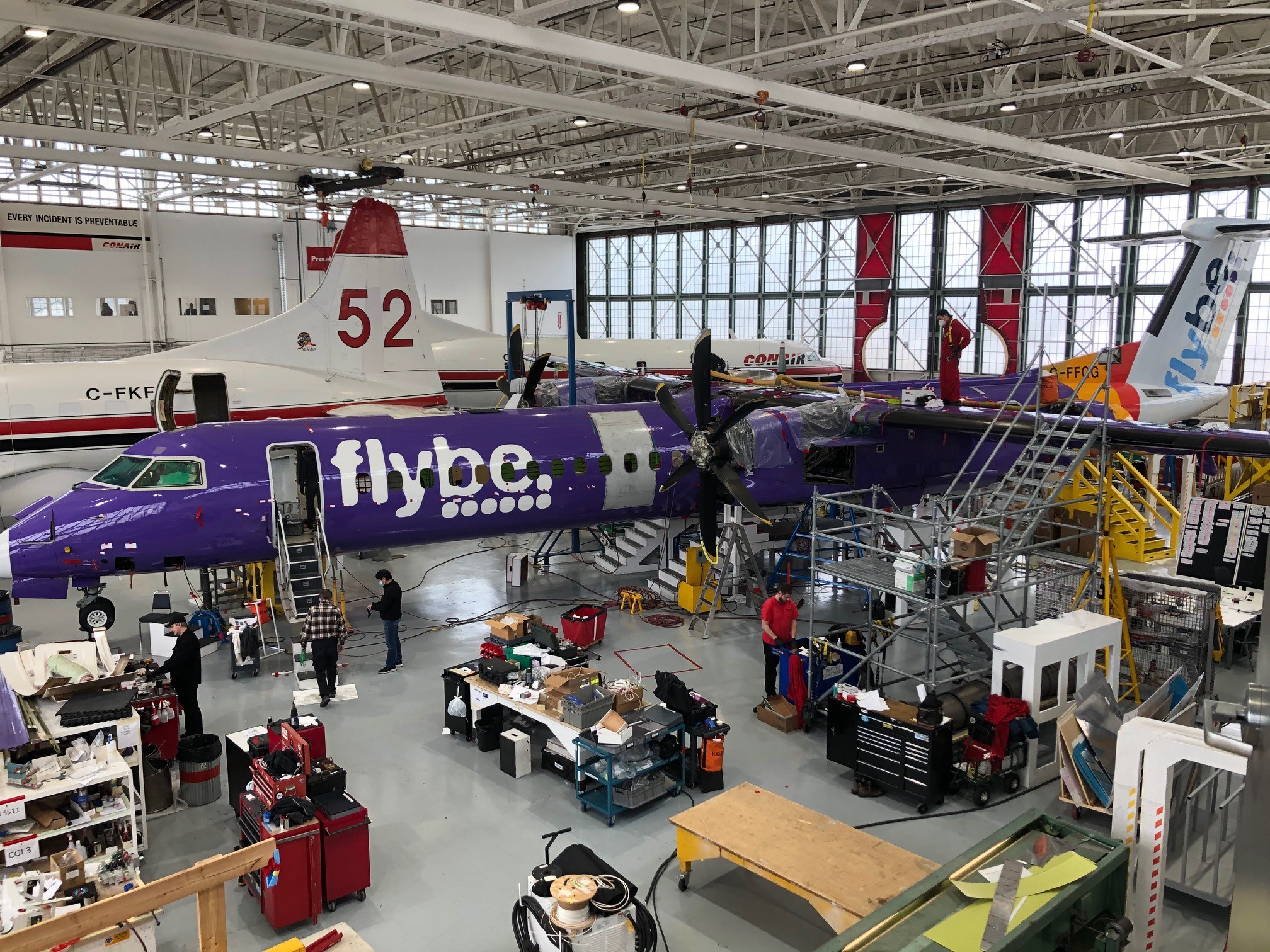 Attaching the water tank to the fuselage is yet more complex - it involves 1,000 detailed steps, and the drilling of more than 6,000 holes to attach the fasteners.

Flybe’s 78-seater G-KKEV, which for seven years sported a decal of former footballer Kevin Keegan, was the first to be fitted out. It touched down at Abbotsford International Airport, British Columbia, at the end of February.

Modifications got underway soon after, with the whole process streamlined to around 75 days to ensure it was ready in time for North America’s wildfire season.

After being fitted with its new tank, the aircraft was taken for a trial run last month. With the Flybe livery still in place at the time, it made for a rather unusual sight - so unusual, that some social media users questioned whether it was real. 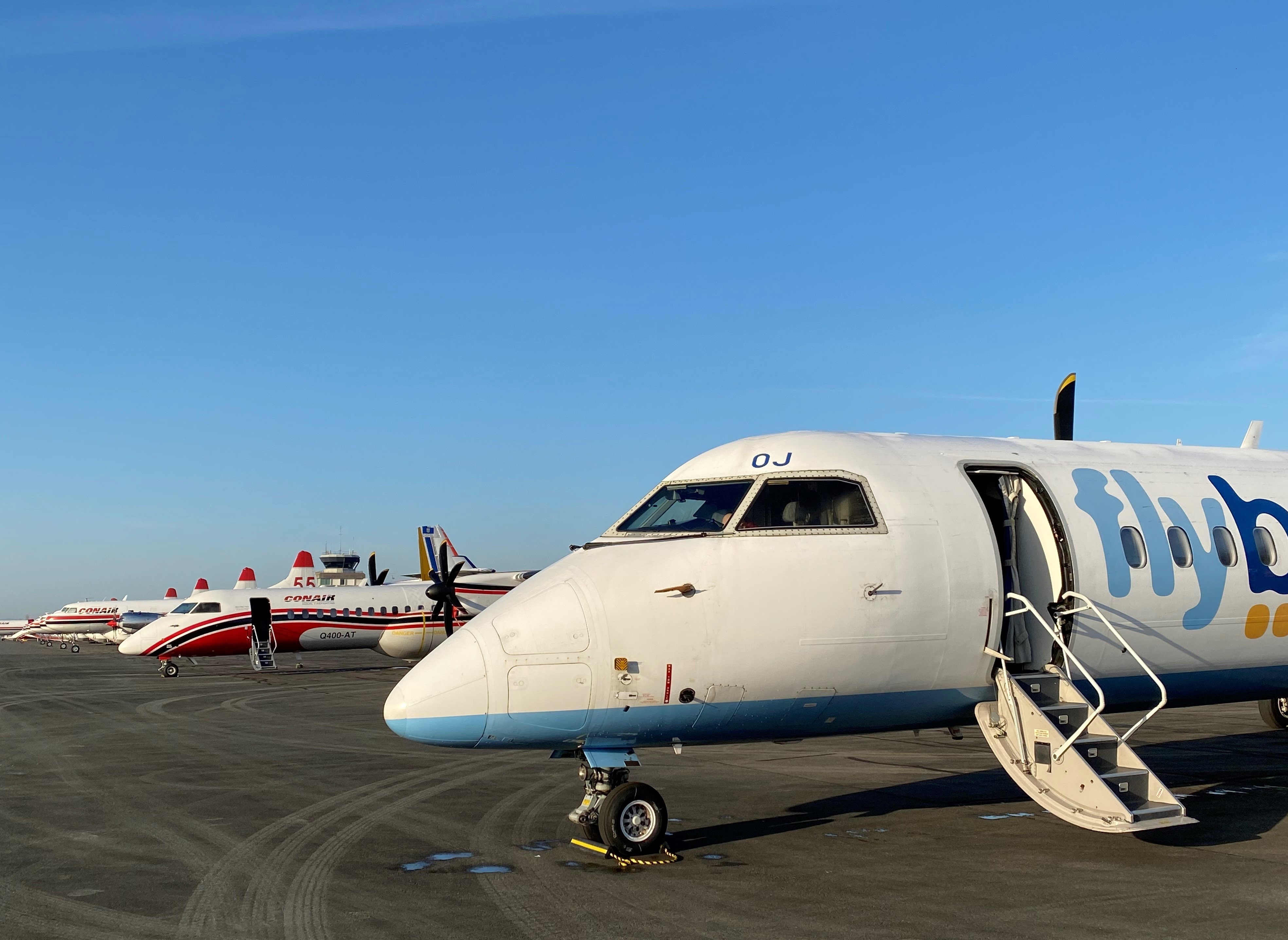 Pictured: A Flybe plane on the tarmac next door to Conair's other Dash 8-Q400 airtankers.

One Twitter user described it as "one of the most bizarre things I have seen fly".

Others were more positive, however. @PlaneMadNews described it as an "awesome sight", while a former Flybe pilot commented: "I flew G-KKEV during its past life with Flybe, it's great to see it find a new lease of life!!"

Conair has been converting Q400 into air tankers since 2005, operating the first Q400AT in Australia during the past bushfire season.

“This is the most versatile air tanker of its size available for aerial firefighting.” explained Conair’s Business Development Director, Jeff Berry.

“The converted aircraft has the capacity to drop 10,000 litres of water, retardant or gel/foam over diverse geography, operable on most 5,000 ft runways. This means the large airtanker can respond to a multitude of fires, including those in more remote settings not located near large airports or tanker bases.”