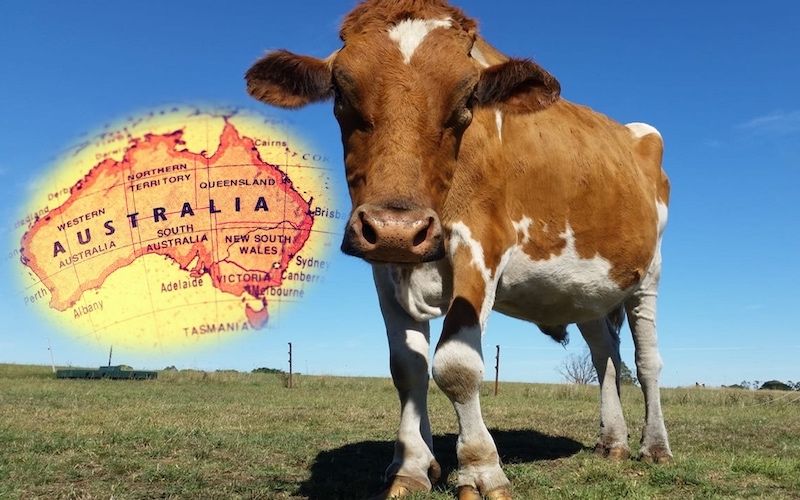 A famous Guernsey - claimed to be Australia's biggest steer - has died at the age of nine, after being ill for a week, leaving its owners "absolutely devastated".

He rose to fame in the land down under after appearing on a TV show where he was examined by Australian celebrity vet Dr Chris Brown, who is reported to have expressed his sadness at the death of his "favourite" and "possibly biggest" patient.

Big Moo had his own Facebook fan page where his owners shared pictures of him and updated his 3,666 followers on what he was doing.

This week the Vine family shared the devastating news that he had fallen ill and over the course of a few days, as his condition deteriorated, they decided to have him put to sleep.

Big Moo had moved in with Joanna Vine and her husband Philip on their farm in Glencoe, South Australia, after they got him from a local dairy as a newborn.

They said they bottle fed him until he was weaned and able to fend for himself in the paddock with the family's horses. He quickly grew larger than other cows of a similar age but kept his gentle nature. The Vine's family Facebook page for Big Moo said "he wanted to be hugged and scratched and just enjoyed being with us. He got in the way all of the time!"

However, as he grew even larger, Big Moo was a little intimidating, as he would still bounce around like an excited dog but Ms Vine said he had touched their hearts so they decided to keep him rather than take another option which would have seen him end up in their freezer.

He kept on growing ever bigger and the media in their home town of Glencoe grew interested in him before national Australian media also reported on him, with those stories being shared globally.

Ms Vine seemed to know Big Moo wouldn't live to an old age though, as the family said vets had warned them his size was due to his pituitary gland producing too much growth hormone.

This caused his muscles and bones to keep developing - with his subsequent weight putting a lot of stress on his joints and ligaments.

During his short life he won many fans though, with the Vine family saying, "he is adored, not only by us, but by people from around the world".

Residents of Glencoe described Big Moo as a "community icon", with the Vine's saying he attracted visitors from near and far who would come to the farm to see him and have their photo taken.

Last year donations were given in exchange for a pat, so that Big Moo could have a new shelter built especially for him, while he had previously helped fundraise for others through a 'cow pat lottery' which saw people guess where his next dropping would land.