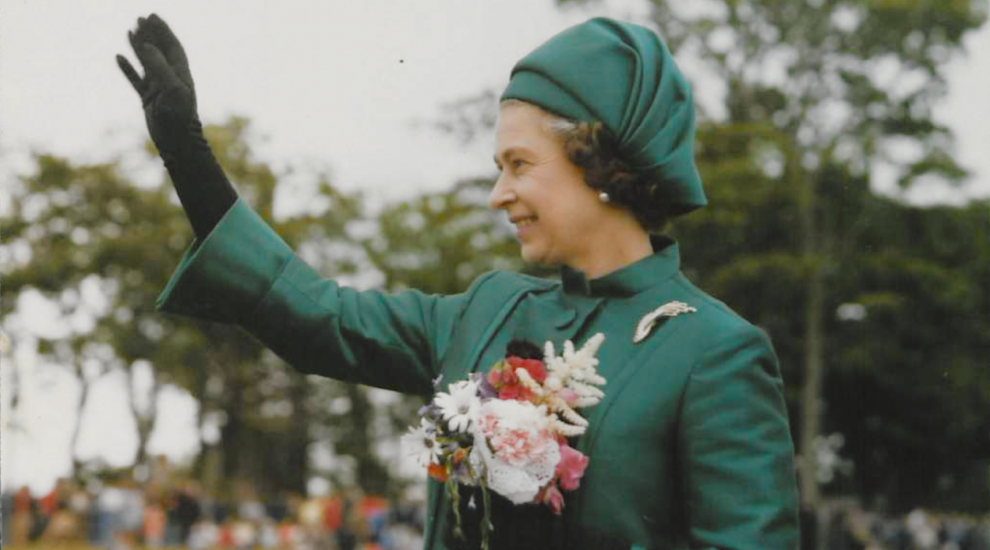 The Lieutenant-Governors of Guernsey and Jersey have paid tribute to Her Majesty Queen Elizabeth II, after our longest-reigning Monarch died this afternoon, at the age of 96.

The Queen was with Her family who travelled to Balmoral after an earlier statement from Buckingham Palace that doctors were “concerned" for Her Majesty’s health.

Announcing the Queen's passing at 18:30, the Royal Family stated: "The Queen died peacefully at Balmoral this afternoon.

"The King and The Queen Consort will remain at Balmoral this evening and will return to London tomorrow."

The Queen died peacefully at Balmoral this afternoon.

The King and The Queen Consort will remain at Balmoral this evening and will return to London tomorrow. pic.twitter.com/VfxpXro22W

His Majesty said shortly after 19:00: "The death of my beloved Mother, Her Majesty The Queen, is a moment of the greatest sadness for me and all members of my family.

"We mourn profoundly the passing of a cherished Sovereign and a much-loved Mother. I know her loss will be deeply felt throughout the country, the Realms and the Commonwealth, and by countless people around the world.

"During this period of mourning and change, my family and I will be comforted and sustained by our knowledge of the respect and deep affection in which The Queen was so widely held."

A statement from His Majesty The King: pic.twitter.com/AnBiyZCher

Also holding the the title of Duke of Normandy - the historical title for the Monarch since the Norman Invasion of England in 1066 - the Queen has always had a special relationship with the Channel Islands.

During the course of Her 70-year reign, Her Majesty paid six visits to the Channel Islands, meeting with hundreds of islanders.

The Queen's first visit to the Channel Islands was in 1949, while her father was King. She was accompanied by the Duke of Edinburgh, who she had married just two years earlier. The pair visited Alderney, Sark, Jersey and Guernsey during a busy day trip.

There was a break of eight years before the now Queen Elizabeth II visited the Channel Islands once more. Her further visits were in 1978 when she was presented with a prize Jersey cow, in 1989 when she opened Jersey's new Elizabeth Harbour and greeted crowds in Guernsey from the balcony of the Royal Hotel.

One year before her Golden Jubilee, in 2001, the Queen returned, and officially opened the new Jersey College for Girls at Mont Millais, she unveiled the Millenium Stone in Guernsey and presented the Seigneur of Sark, Michael Beaumont with his MBE.

Her Majesty's sixth and final visit to the islands came in 2005. It was in many respects the most memorable and poignant, being arranged to coincide with the 60th anniversary of the Liberation. She unveiled a commemorative stone in Guernsey which can be seen at the Harbour.

On this year's Liberation Day, the 77th anniversary, the monarch sent her "warmest greetings" to her subjects across the Channel Islands.

In messages read by her youngest son, His Royal Highness The Earl of Wessex, Prince Edward, the Queen reflected on the "trials and hardship" faced by the Occupation generation, saying that she was reminded of the "courage and sacrifice" of those who remain, were deported or evacuated or served in the Armed Forces. 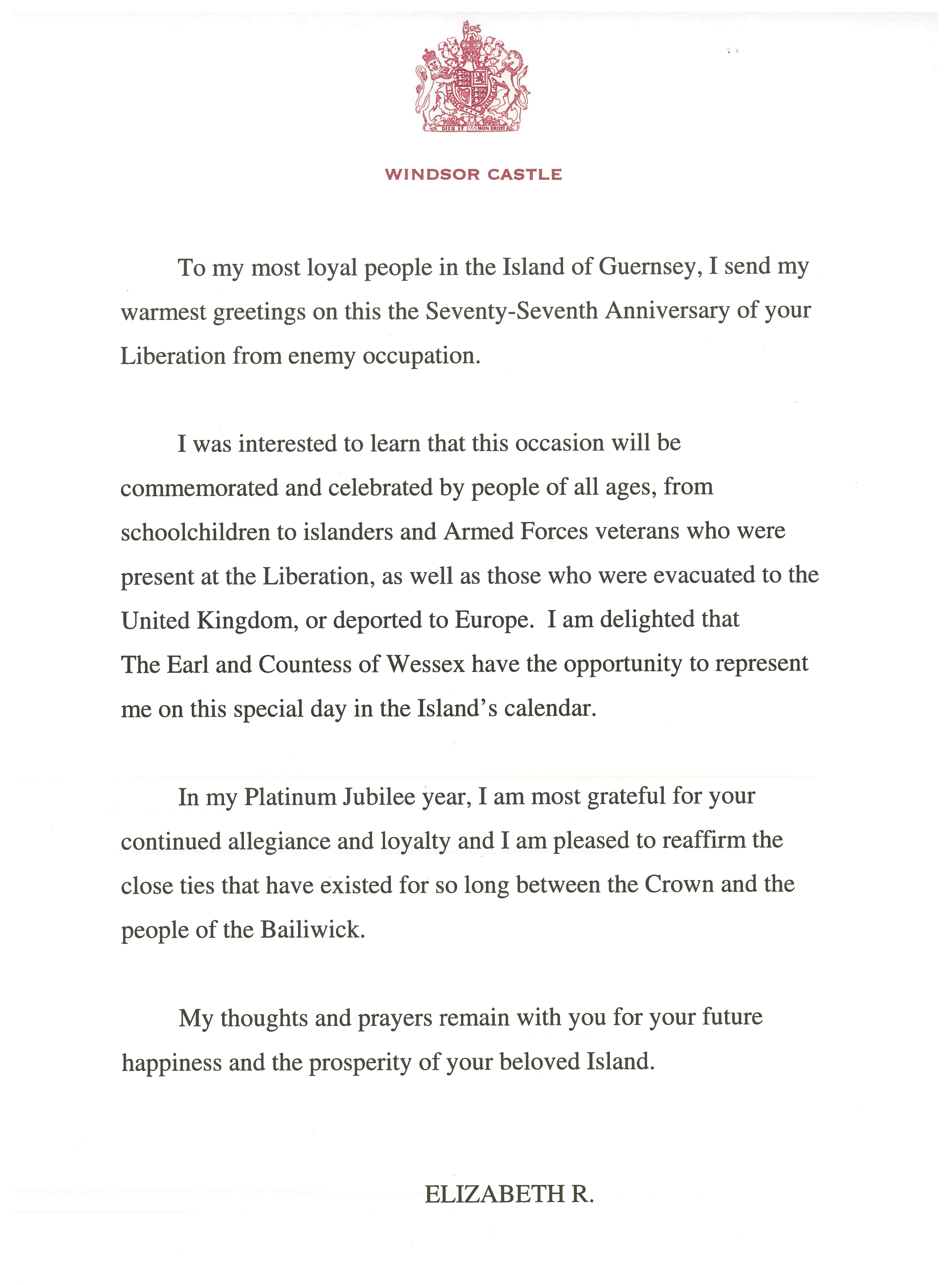 Pictured: Her Majesty's message to Guernsey on the 77th anniversary of the island's Liberation.

She went on to state that she continues to "cherish the close and long-lasting ties" between Guernsey and the Crown, which she said were founded on the

It is with great sadness that we have learned of the death this evening of our Sovereign, HM Queen Elizabeth II. Throughout a remarkable reign, the longest in British history, her constancy and devotion to duty have been an inspiration to us all. She will be profoundly missed. pic.twitter.com/omuZE2QOnB

The statement above was shared by Guernsey's Government House on Twitter shortly after the announcement from Buckingham Palace.

The Government House website had been changed to black in deference to Her Majesty.

Lieutenant-Governor, Lieutenant General Richard Cripwell CB, CBE was appointed to his role, as Her Majesty's representative in the Bailiwick earlier this year.

Following the announcement of her death this evening, His Excellency said it was an honour to serve in Her Majesty's army and then to be Her personal representative in the Bailiwick. 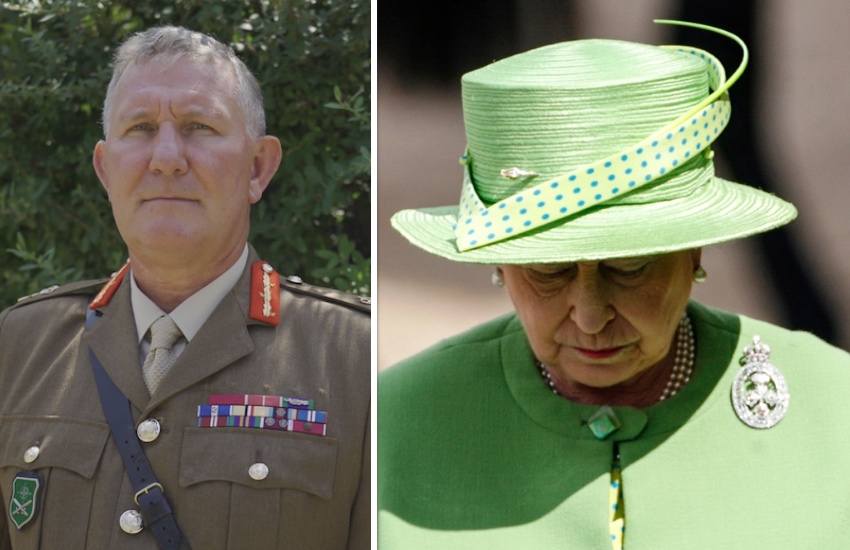 Pictured: His Excellency, the Lieutenant Governor, and Queen Elizabeth II.

The Bailiff, Richard McMahon, has spoken of his and the Bailiwick's "profound sense of loss" following the death of Her Majesty The Queen today.

Mr McMahon's tribute highlighted the duty and public service of the longest-reigning monarch in British history.

"Like others across the Bailiwick and throughout the world, I feel a profound sense of loss," said Mr McMahon. 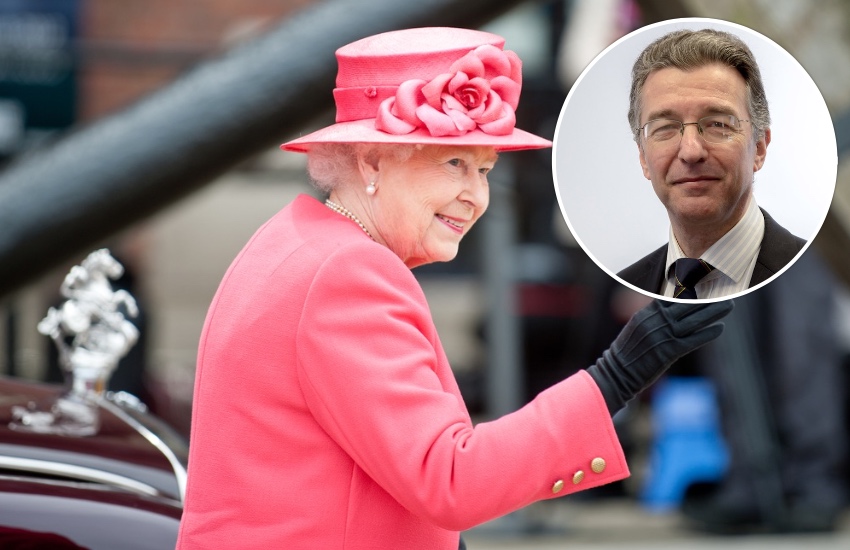 "Her Majesty offered an example to us all in her enduringly strong sense of duty and public service.

"She was an important figurehead for the UK, for the Bailiwick of Guernsey and for many other parts of the world throughout her reign.

"On behalf of the people of Guernsey, I have asked His Excellency the Lieutenant-Governor to send the Bailiwick's official condolence message to Buckingham Palace."

Guernsey's most senior politician also reacted to the death of Her Majesty The Queen. 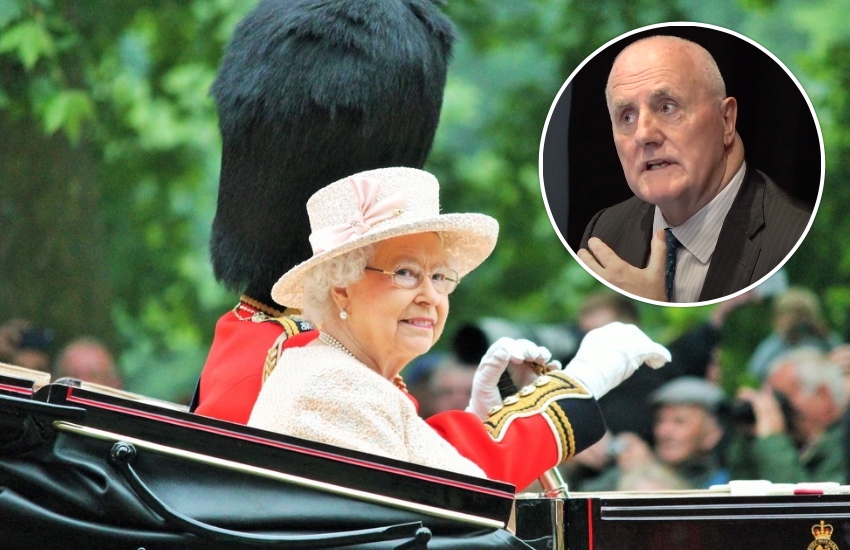 "Like many in our community, for as long as I can remember Her Majesty Queen Elizabeth II was the sovereign.

"As the longest reigning monarch in British history, she represented continuity, constancy and commitment to people in the Bailiwick and around the globe.

"It is sad, strange and unsettling to hear that Her Majesty is now lost to us."