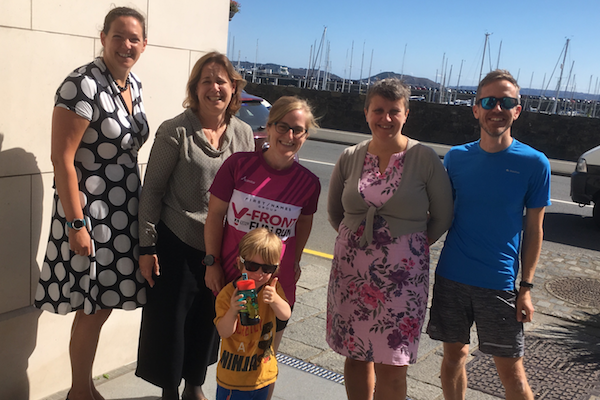 This weekend, five people from Guernsey called the Team Donkey relay team, will be raising funds for the Priaulx Premature Baby Foundation (PPBF) by running the Equinox24.

The 24-hour-run at Belvoir Castle in Leicestershire is a big challenge for the team.

“The aim is to run the 10k loop around the castle as many times as possible over 24 hours, while sleep deprived,” Dawn Sealey, who organised a team with her friends and colleagues to mark her 40 birthday, said.

“And we are camping! For each of us it will be a huge challenge, whether our individual aims are to cover 20k or 60k each.”

The PPBF helped provide accommodation next to Southampton Hospital for Ms Sealey and her husband for five weeks, while their very poorly premature baby son was in ICU in 2013.

A new facility, known as The Burrow, opened toward the end of 2017 - it is available for any island residents going through what Ms Sealey's family did.

“The peace of mind and home away from home this gave us really cannot be underestimated,” she said. “What you may not know, is that when not in use by parents of premature babies the Foundation generously lets anyone in need from Guernsey with a seriously sick child at Southampton Hospital stay in one of their two flats.

"Recently, friends of ours spent over six months in one of the flats while their child had treatment for leukaemia. They also helped a colleague of mine who told me they would be forever grateful to the PPBF, as this took a huge weight off their shoulders in terms of finding a place to live and also enabled them to have a taste of normality.”

The PPBF relies on fundraising from people such as Ms Sealey to help with the on-going costs of their two Southampton properties. Funds also help to provide special equipment, care and support to the children of the Bailiwick of Guernsey onthe Guernsey Neonatal Unit, whether they are premature babies, requiring special care or are ill or suffering a life threatening condition.

Jo Priaulx from the PPBF added: “I would like to wish Dawn good luck with her recent 24 hour endurance challenge and say a huge thank you for all her efforts and help. I really appreciate her ongoing commitment to the PPBF.”

If you would like to donate to Team Donkey, Dawn has a JustGiving page: justgiving.com/fundraising/dawn-sealey2.

“They will be sorely missed by the Foundation”