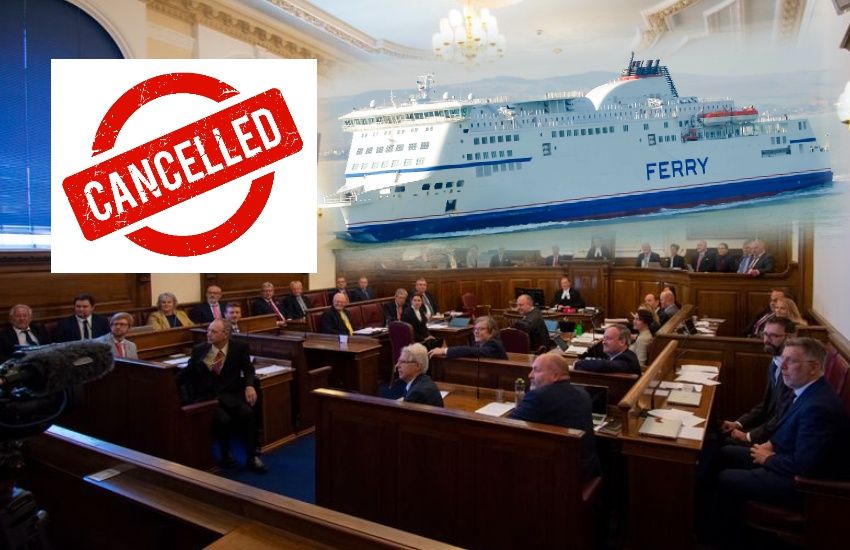 The Policy & Resources Committee has abandoned plans to buy the island a new passenger ferry.

Committee President Deputy Peter Ferbrache told the States' Assembly yesterday that the proposed deal was off - eight months after saying there was "a better than even chance" of buying a ferry imminently.

But Deputy Ferbrache is not giving up all hope of Condor Ferries adding another vessel to its Guernsey fleet. 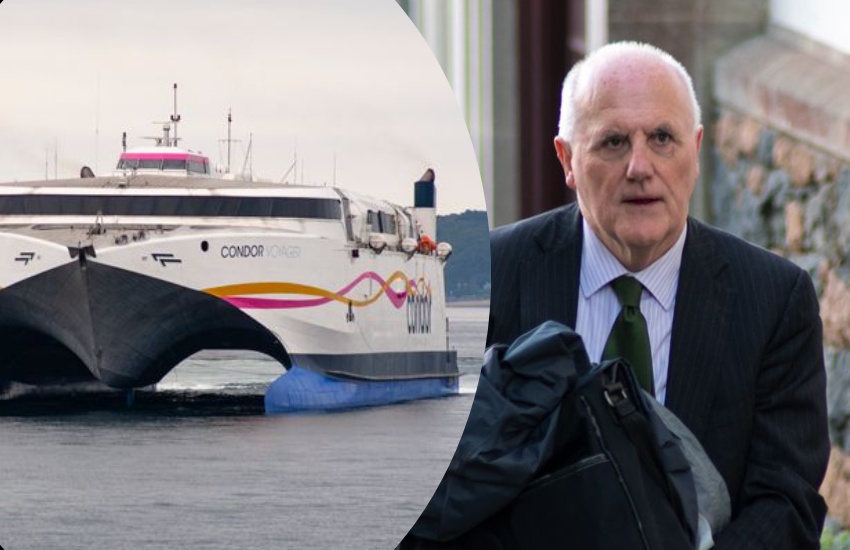 Pictured: Deputy Peter Ferbrache told the Assembly yesterday that any additional ferry purchased to serve the island would now not be owned by the States.

Replying to a question from Deputy Peter Roffey about whether the Committee still intends to buy a ship, Deputy Ferbrache said: "No, they don't."

Minutes later, as reported by Express yesterday, Deputy Neil Inder, the President of the Committee for Economic Development, which is responsible for securing and promoting air and sea links to the island, pledged to meet Condor and demand improvements in its service to the island.

Deputy Inder told the States' Assembly that he had concerns over the ferry company's schedule this year and would shortly meet its Chief Executive, John Napton, and press for improvements in 2023.

Historically, the States' influence over ferry services has been limited by having no stake in the ownership of vessels serving the island and no legally-binding service contract with the operator. 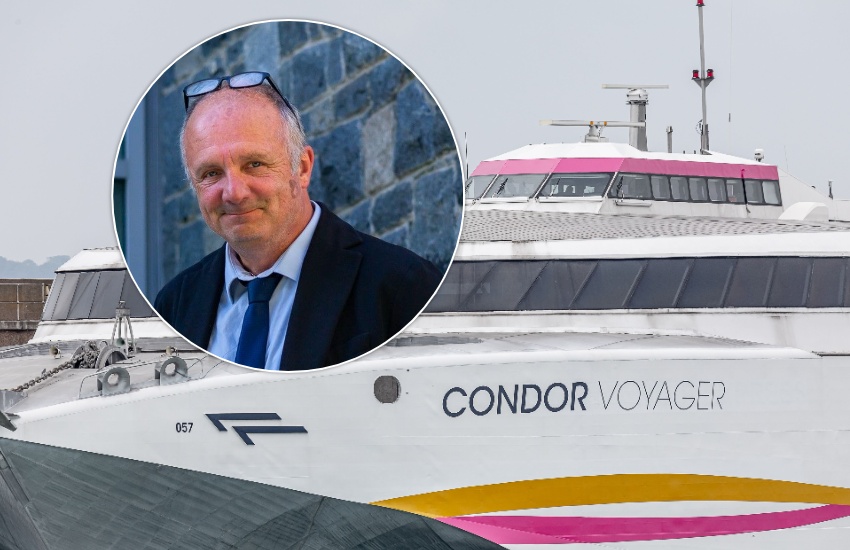 Pictured: Deputy Neil Inder hopes that imminent discussions with Condor will lead to an improved service for islanders next year.

The Policy & Resources Committee first announced early in January that improving sea links was a top priority for 2022 and that it planned to spend an estimated £15-20million buying a ferry and leasing it to Condor.

At that time, Deputy Ferbrache said he thought the deal could make financial sense as well as strengthening the island's transport links and that a contract with Condor "could well be done by the end of January".

"Funding is being looked at in the next 10 to 12 days," he said. "Until you've got a commercial contract signed, you can't say for sure, but there's a better than even chance that it will go through.

"The idea is that a conventional ferry would add support to Condor's current cluster of ships, which would give more security and an enhanced service to the island."

At the same time, the Committee's treasury lead, Deputy Mark Helyar, said there had been "a lot of disappointment" with Condor's Liberation ferry and that "the opportunity to have a conventional ferry that will go in most weathers we thought was a good opportunity".

The plan was welcomed by Condor and Mr Napton said he was "optimistic" that it would enhance the company's service to islanders. 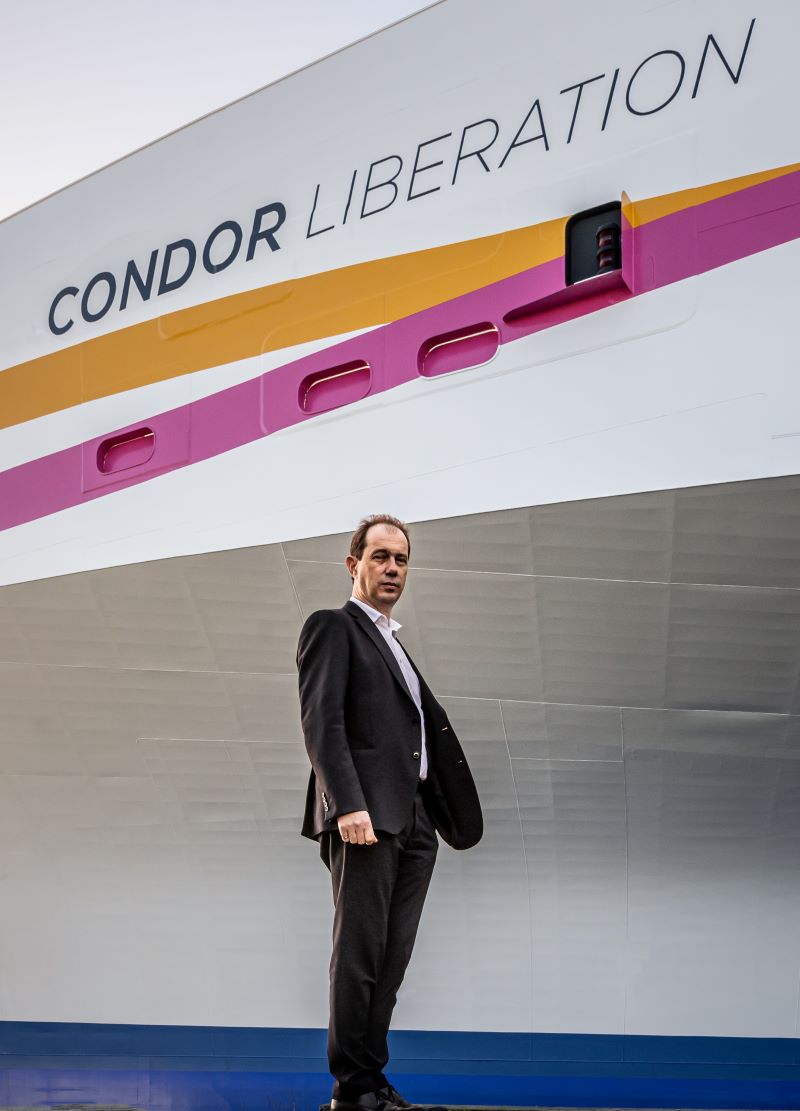 Pictured: John Napton, Condor's Chief Executive, expressed enthusiasm and optimism when the Policy & Resources Committee first announced that it could be days away from buying a new ferry and leasing it to the company.

Before the end of January, the Committee faced calls from other deputies to take its plan to the States' Assembly for approval before spending up to £20million on a new vessel and criticism for not first developing a long-awaited sea links strategy.

Deputy Yvonne Burford, President of the Scrutiny Management Committee, said: "I don’t think it matters what complex financial vehicle the Policy & Resources Committee might use to purchase this ferry in order to try to overcome the fact that it would not have the authority to purchase it from capital, I still don’t believe the Assembly should be sidelined in this way."

Deputy Gavin St. Pier said he was considering leading a Requête on the issue.

"I can't get my head around making such a strategic decision as buying an additional ship before the States have debated and approved the policy framework for air and sea links promised in the Government Work Plan before the end of 2021 but now not due until much later this year," said Deputy St. Pier.

"A Requête is probably the only way to force a debate on the matter. I've no idea how much appetite there would be for that but it may be worth looking at."

And Deputy Peter Roffey said: "[I] struggle to understand how Policy & Resources have delegated authority to buy a ferry. Surely their new power to approve capital spending only covered items approved under the Government Work Plan. [I'm] not saying it's a bad idea – just that I think it needs [States'] approval. [I] have written to Policy & Resources seeking an explanation."

Pictured: The Policy & Resources Committee faced questions about buying a new ferry but the Assembly did not put any new constraints on the Committee's plans.

But the Committee was undaunted by the criticism and concerns of other deputies.

As recently as the end of May, in a wide-ranging podcast interview with Express, Deputy Ferbrache said he remained confident that a States-backed ferry would be purchased during 2022.

"I think we will get the boat," he said then.

"It is taking a bit longer than I said at the Scrutiny meeting earlier in the year. But I think that will come. The Guernsey Investment Fund will, I think, advance the funds and there will be a boat.

"I was certain it was going to happen. I can’t see any reason why it shouldn’t. We’ve still got seven and a half months to go of this year. I’d be very disappointed if that didn’t happen. But it will happen."