'Save our Southampton route' 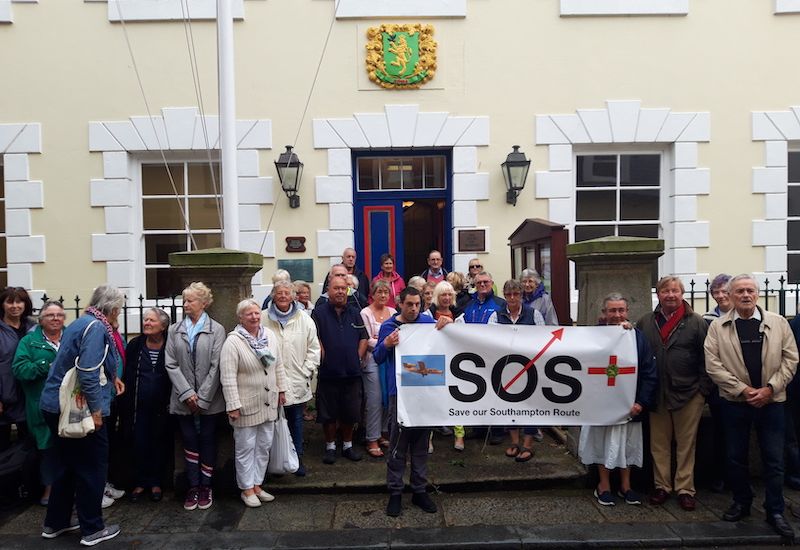 'Save our Southampton route'

Around 60 people have gathered at the steps of Alderney's courthouse to urge their politicians to fight harder to retain the island's Southampton air route.

They were supporting former States Member Barbara Benfield who collected around 700 signatures expressing dissatisfaction with the service provided by Aurigny in recent months.

She presented every States Member with a copy of her letter - which also collated passengers' tales of delays, cancellations and offloaded luggage when travelling with the airline – on their way into the September States Meeting.

Last week she travelled to Guernsey to wait at the island's Royal Court to hand her dossier to the President of the Committee for Economic Development, Charles Parkinson, along with a copy for every deputy.

Her trip to the island swung the focus of her campaign towards saving the Southampton route after conversations, she said, with around 200 members of the public and Guernsey politicians. 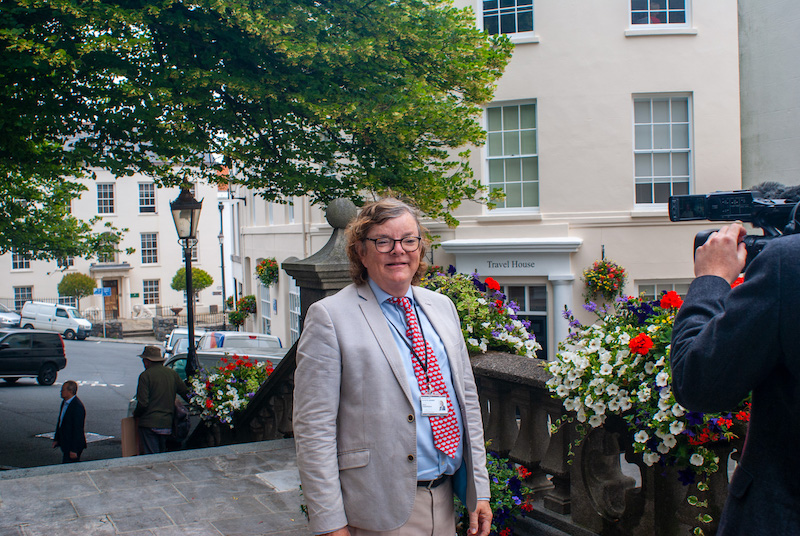 Pictured: Deputy Charles Parkinson wrote to Alderney saying they were working closely on this matter, trying to find a sustainable system for the future.

She concluded the States of Alderney was not 'making enough noise' to highlight the paramount importance of the link to the island's economic and social well being. Concerns over the future of the Southampton route have swirled for several years. But 18 months ago, as the PSO process began, to set out service levels and tender for an operator, the States of Guernsey gave only the Guernsey route lifeline status.

It means that at the moment only the Alderney-Guernsey route is eligible for public subsidy. The recent introduction of the Guernsey to Southampton route has only intensified fears that it will fall away.

"In Guernsey, the public hears a deafening silence from Alderney on this issue," said Mrs Benfield. "The States of Alderney are just not making enough noise. What are they doing? There's not enough information coming from the States as a collective body to tell us what they are doing to save our air links. They need to reassure us that they are really fighting for this route. There's a huge strength of feeling about this matter on Alderney. People are feeling let down by them. This is urgent."

The turnout was an indicator of the strength of concern. The crowd was rallied after an appeal for support earlier on the local radio station earlier in the day. Dilla Wright, who wrote a letter of her own to each States Member, explained why she had made the trip: "how would Guernsey residents feel if they lost their Gatwick route? That's the equivalent to Alderney losing its Southampton route." 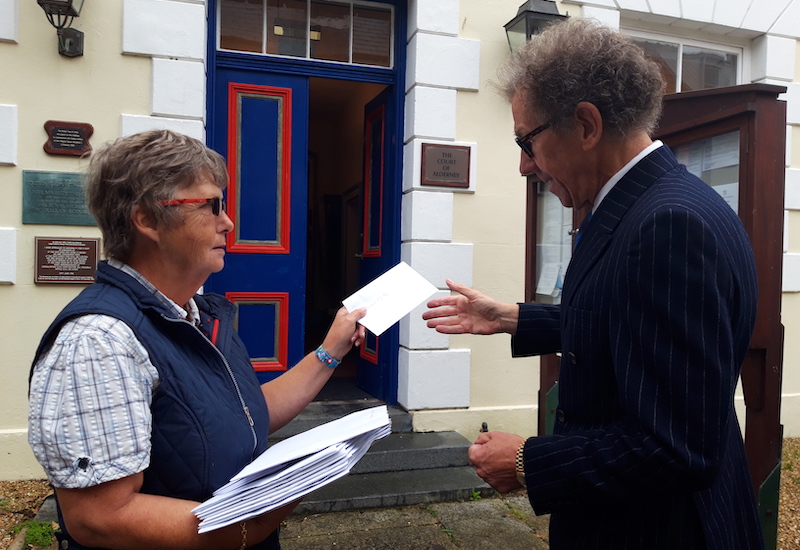 Bonnie Jenkins said: "We came here because we think it's time Guernsey realised that we need a service that is reliable, not one where you have to allow three extra days to make sure you get off the island and come back. I also think it's time Aurigny showed their accounts for each route so we can see where their losses are actually coming from, so they stop blaming Alderney. In any business, if the company was making the sort of losses Auringy is making, the CEO would go. Their £7million losses will be passed on to all of us."

Former archaeologist Helen Paterson said: "Back in the 60s there was an office on Victoria Street and 12 Trislanders and it all went like clockwork. As soon as Guernsey took overall they thought about was the big planes and places like Gatwick and started losing money on it. Alderney is the Cinderella of the Channel Islands – with two ugly sisters."

At the States Meeting, Policy and Finance Committee Chairman James Dent addressed the points Mrs Benfield raised as part of an answer given to Alex Snowdon on the progress of the PSO. He said debate on the preferred bidder had been pushed back to November as it had emerged that for some of the bidders there were Civil Aviation Authority licensing problems associated with the Southampton route. But conclusions that it would be cut were premature, he said.

"[Deputy Parkinson has] said in regard to the concept of SOU-ACI as a life-line: 'As a general matter, I would support it but not at any cost' – although he has put a rider on his statement, this does not sound like a man who does not wish to come to an agreement with us. The issues involved in our air transport links are complex.  Before rushing headlong in, we need to establish and have everyone understand any positions we have in common with the Committee for Economic Development (and, indeed, with others in Guernsey).  And please everyone note our priority which is to continue working constructively with Guernsey to find the best solution. So although we cannot, tonight, say precisely what we are doing in preparation, the public need to know that we are all working extremely hard - with experts and with civil servants, both those here and in Guernsey. The States recognise and understand the levels of concern being expressed and this makes us even more determined to achieve the best possible outcome for our future prosperity." 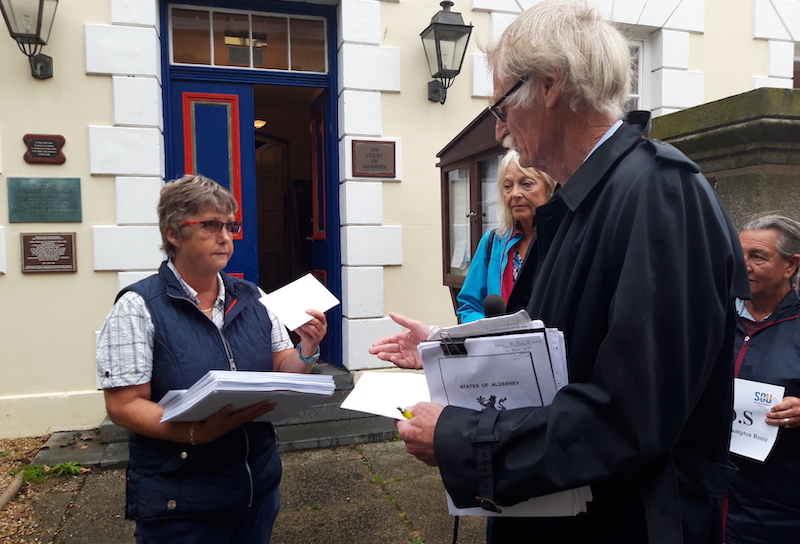 He finished by producing a letter that had only just arrived from Deputy Parkinson. He read: “Our respective officers will continue to work closely on this matter, with a view to finding a mutually satisfactory and sustainable solution for Alderney’s Air links going forward."

Before closing the meeting, in an unusual move, States of Alderney President William Tate also weighed in on the matter, imploring the public to trust their politicians.

"In my role as President I've also been involved to some extent in what has taken place in the States on our approach," he said. "They are working extremely hard. They are focused with their eyes on the prize and when the time is right, deliver a strategy which will allow us to fight our corner when it comes to the events that are going to unfold over the next few months. Information might be helpful, but information that would damage our negotiating position would not be. I invite the community to trust our politicians that they are working hard and will continue to work hard and will secure an outcome that will ensure the future of our community."

After the meeting, Mrs Benfield said she appreciated the reassurances made by States Members and the States of Alderney.

"They have said they are working hard behind the scenes and when the time is right they will produce their argument to secure the Southampton route. When is the time right? Our States needs to present a united, forceful front and secure an agreement from Guernsey that Southampton is a lifeline route. We need that to happen sooner rather than later."

Pictured top: Alderney's residents gathered to urge their politicians to fight for the route to Southampton.