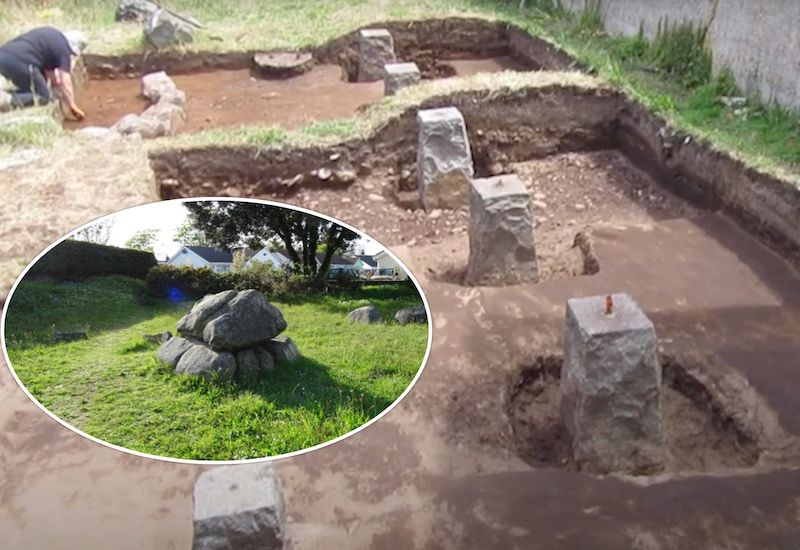 A team of local archaeologists have been working for weeks to uncover a prehistoric dolmen at Sandy Hook, which has been left untouched for the last 100 years.

The work began six weeks ago and must be completed before the Guernsey Housing Association can have the go ahead to begin building homes in the area.

In that time, the team has worked on excavating the main tomb - which was partially completed by a similar project back in 1912 - and has started to uncover the rest of the site.

"We've made lots of progress in the past week," a spokesperson for the team said. "We're down to probably pre-historic land surface at one end of the site which has all the cuts through it for the granite pillars that made the fencing.

"We've got part of one of the circles of stones which was excavated in 1912 - that has shown up again.

"There's quite a bit of pottery and flint coming out and we have hopes of finding some more as we head towards the gate, which we will probably start doing next week."

The team has been able to delve further into the history of the main tomb over the past few weeks, as well as the findings from the previous excavation.

"It's a funny one because, for many reasons, one of which is the orientation, the excavators in 1912 were pretty sure this end was the entrance, which would mean the entrance is a little bit north of west - that's an unusual orientation for a prehistoric structure like this," the spokesperson continued. "Usually, they open to the south east like the other dolmens on the island.

"Something else they in 1912 is move the cap stone to aid in the excavation and recording. While it was moved, somebody engraved a little cross - perhaps it was done to help reposition it after they moved it."

For further information on the GHA's plans for the site in Sandy Hook, click HERE.

Pictured top: Archaeologists working on the site with the dolmen before it was excavated.