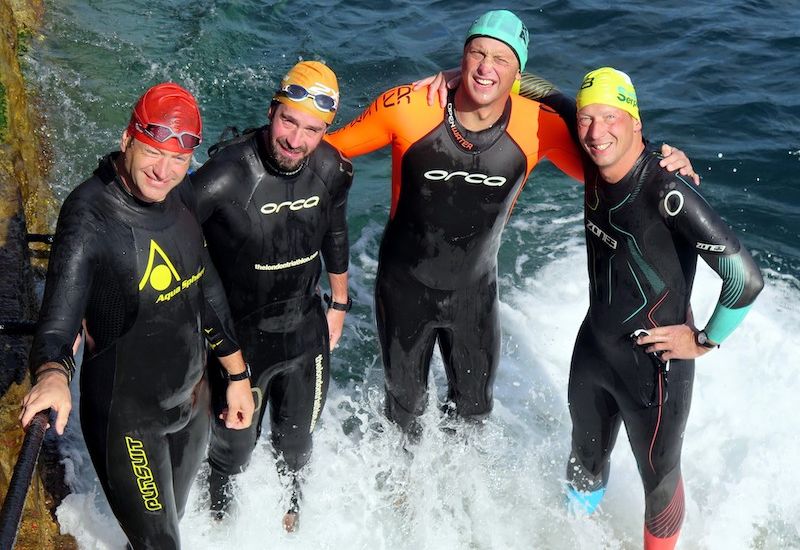 An Alderney man fighting a terminal cancer diagnosis has completed a gruelling swim around the Island to raise money for research into the disease.

Tom McKinley, 42, and four pals who have all been affected by cancer, battled the infamously strong currents and tides around Alderney to complete the challenge in just over five hours.

The last person to swim around the island was Olympic gold medallist Duncan Goodhew. He did it more than 20 years ago. 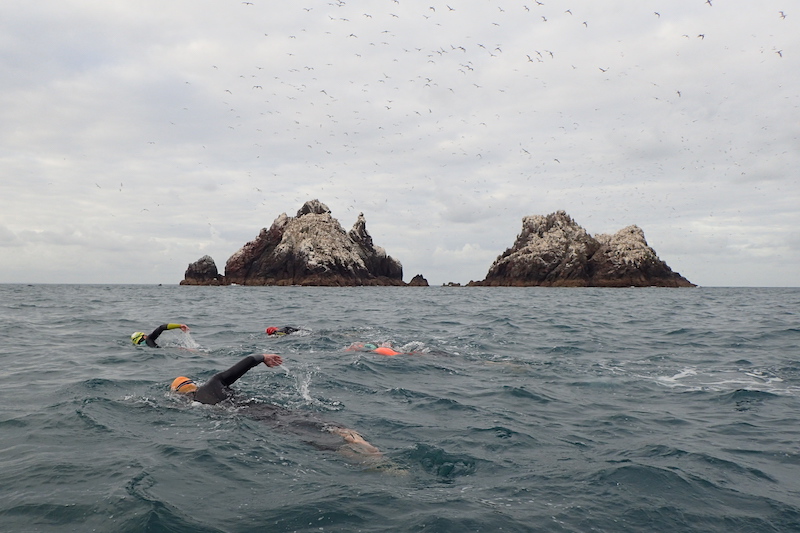 Pictured: The group completed the challenge on Saturday.

Mr McKinley, a civil service consultant who now lives in Hampshire, was given six months to live seven years ago after being diagnosed with lung cancer. It spread to other parts of his body and he has since had surgery for brain cancer.

However, he has defied predictions to keep ongoing. The cancer has destroyed a lot of the volume in his lungs meaning he can only breathe on one side, yet despite that, he has taken up open water swimming, starting with just a mile in the Serpentine, which he admits exhausted him.

But, joined by friends Angus Henderson, a financial services worker from Surrey, farmer Tom Lidell from Hampshire and George Richards, a surveyor from Somerset, he began training for their Alderney swim six months ago. The two Hampshire residents trained in a gravel pit in Hampshire and also variously off the South Coast, in the North Sea in Scotland and in Alderney. Their efforts culminated with their longest swim yet -  the 10 mile feat on Saturday.

Mr McKinley said the challenge had been their way of telling cancer to 'get stuffed'.

"We've all all been touched by cancer in some way," he said. "I was diagnosed with cancer eight years ago and despite the odds I've managed to still be here. A few years ago we started swimming for the Royal Marsden Hospital and that was a small one miler, and they gradually increased, raising funds en route. It was a way of saying thank you from all of us."

Mr Richards added: "My mother was diagnosed with brain cancer last April. She fought it but sadly died two weeks ago so we were doing it for her as well.”

Round Alderney swim 2019 from Bailiwick Express on Vimeo.

The four bravely set off from the end of Alderney's 900m long Breakwater at 7am on Saturday in the dark, and struck out against the forceful currents of the Swinge.

"I've dreamed about swimming around Alderney for 42 years," said Mr McKinley. "But setting off from the back of the Breakwater when it was pretty dark, pretty cold, pretty windy and choppy, and knowing how far we had to go was intimidating, I admit.

"But as soon as we found the tide though the nerves calmed down and we managed to start making good ground."

They were accompanied on their trip by Alderney Wildlife Trust manager Roland Gauvain in a kayak and AWT Avian Ecologist Justin Hart in a RIB.

They passed the swimmers energy drinks and sugar-rich snacks including tinned peaches, bananas and jelly babies to help them overcome the challenges of the mission.

"Eating while swimming was harder than we imagined," said Mr Lidell.

"The part between Bluestone Bay and Hanging Rock was hard work as by then we were against the tide," added Mr Richards. "Coming round Chateau L'Etoc was very choppy," added Mr Richards. "But we managed to keep a sensible pace and had each other, and what we were doing it for, to spur ourselves on."

"I got hit by a jellyfish in my face an hour before the end which was pretty painful," said Mr Richards. "I wouldn't recommend that one. Touching the end of the Breakwater again was a massive relief."

Their efforts have raised money for Cancer Research and Alderney Wildlife Trust. "Both charities close to our collective hearts and we're not far off £5,000 now so it was all worth it," said Mr McKinley. 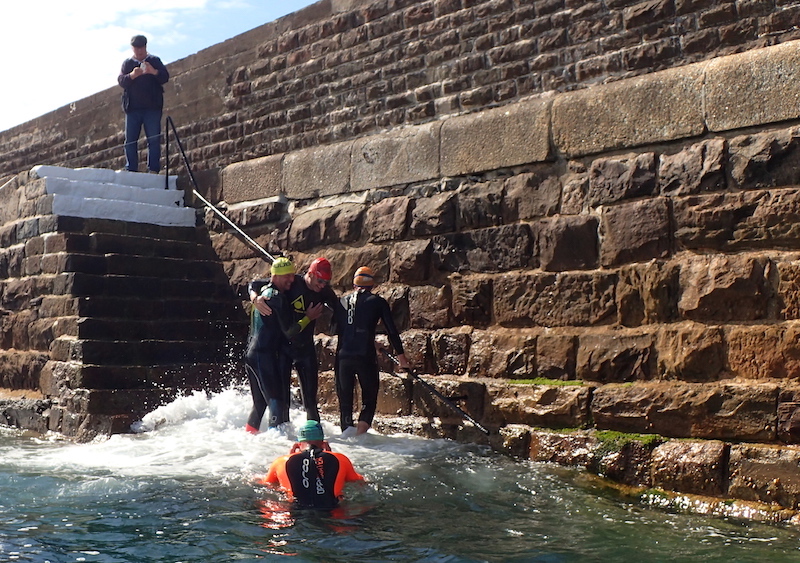 Pictured: The moment the swimmers finished their challenge.

Roland Gauvain said he was full of admiration for the four swimmers.

"As an organisation dedicated to the protection of Alderney's marine environment we could not be more proud or grateful to Tom McKinley and his team for their incredible effort," he said. "The team have all face very real challenges getting to this stage and their goal of raising funds for Cancer Research, a subject which has such importance for so many of us, is an incredibly important one.  Finding out they would also be raising funds for the AWT was a true surprise but one we obviously welcome and would like to express our gratitude for."

You can still make contributions to their cause on their Just Giving page here.