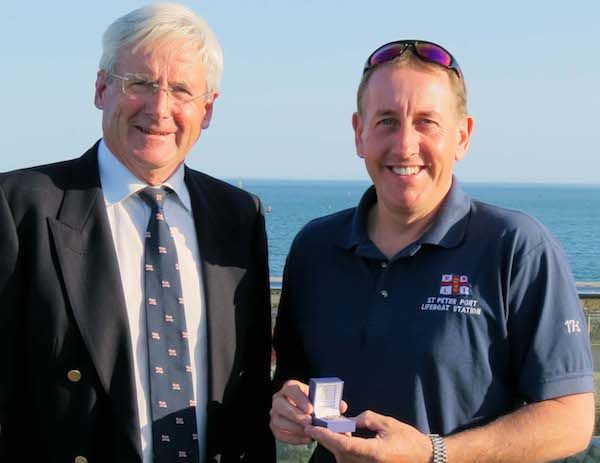 Jason Norman, who has been a member of Guernsey's lifeboat team for 21 years, has been presented with a pin badge marking his years of service.

During his long service as a "valued member" of the local RNLI, Mr Norman has progressed through the ranks, having been promoted to second coxswain eight years ago.

A coxswain has to ensure the lifeboat and equipment is always ready for service and they lead the lifeboat crew at sea and ashore. It is a responsible position that means Mr Norman has represented the RNLI in the community and has been proven to have strong leadership skills and a strength of character to deal with all the elements and unknowns that occur as part of that role.

Mr Norman was presented with the pin badge from the RNLI at the AGM by Chairman, Jim Le Pelley, who said: "Long service awards are not a regular occurrence but we are lucky in that our team of volunteers are very dedicated and tend to stay with us for a long time."

Mr Norman, Second Coxswain for the St Peter Port Lifeboat said: “I’m absolutely delighted to have received recognition for my long service. It’s such a privilege not only to be part of the RNLI, but also to be part of such a passionate and dedicated team here in Guernsey.”

The local RNLI also said it is always looking for more volunteers to join and as there is a team behind the scenes as well as on the water if anyone has some spare time and wants to help the community they should contact the local branch.