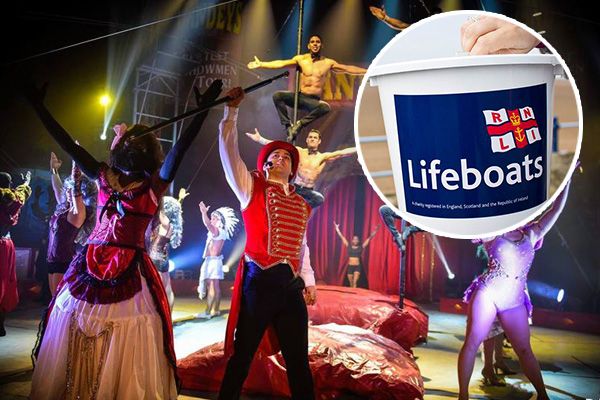 Extra precautions have been put in place to ensure charity donations are safe, and there isn't a repeat of last year's theft which ended what was otherwise a successful visit by Gandey's Circus.

The travelling show was in the island in May last year too, with sell out performances under the big top which was set up near the former Guernsey Bowl on Victoria Avenue.

Collections were taken during each of the shows so money could be donated to the lifeboat service at the end of the visit, but before that could happen the donations disappeared.

At the time, Guernsey Police said an "unknown amount of money" was inside two collections boxes which were taken along with a money tin belonging to the circus.

As well as that, there was added drama during the visit to ensure it was a memorable one, when one of the performers fell from a rotating wheel suspended above the arena. Howie was later confirmed to have not been seriously injured and he was able to go back to meet guests before the circus travelled on to Jersey. Howie is now back in the UK with new performers having joined the circus.

Above: The moment when Howie fell from the rotating wheel during a show last year.

Below: Howie was able to confirm he hadn't been seriously injured before the circus left Guernsey last year to move on to Jersey. It's not yet been confirmed if Howie will be back in Guernsey this week with Gandey's Circus.

A spokesperson for Gandey's said they are excited to be back in Guernsey this week, and the box office is now open. While they will be collecting money for the RNLI again, the spokesperson said; "needless to say we were devastated last year when money was stolen from the circus and we will take as much precaution as we can to help prevent this happening again."

The circus has travelled to Guernsey after spending a third winter in Hong Kong, with 'an international cast of over 30 artistes'.

The circus has been described as "even bigger" and "even more spectacular" with the producers having also worked on the Chinese State Circus and Sky One’s Cirque de Celebrité.

Santa Claus is coming to Town!