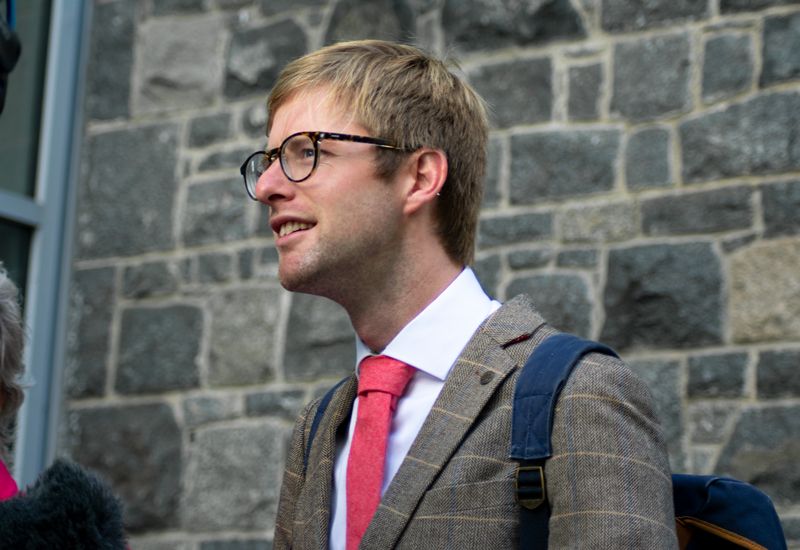 A Deputy and café owner has explained why he said that some covid rules were "ridiculous" when he recently found it necessary to close his business temporarily.

Deputy Andrew Taylor, who was first elected to the States in October 2020 following the first wave of covid-19, owns Taylors of Market Street as well as tourism-focused Tour Guernsey.

He closed his café for five days after one member of staff tested positive for covid-19 and another had to enter passive surveillance in case of catching the virus as well.

Deputy Taylor said he initially closed the café for one day after an employee tested positive on a lateral flow test. He did this to protect staff and public safety. He was expecting covid to develop in a second employee who was identified as a close contact of the first employee.

Deputy Taylor said that his frustration with the States' current covid regulations arose when he called public health officials for guidance regarding the operation of his business and keeping staff and customers safe. He said he was calling as a business owner and not as a politician.

Pictured: A Facebook post which was shared by Taylors of Market Street to announce its temporary closure to comply with covid rules. Taylors has since reopened.

Taylors of Market Street announced it was temporarily closing "because of ridiculous self-isolation requirements" and "whilst we follow the rules", which it followed up with hashtags spelling out "not angry - just disappointed". It has since reopened.

In a second, more light-hearted Facebook post, Taylors of Market Street announced earlier this week that it would reopen when tennis star Novak Djokovic was released by authorities in Australia who had confined him to isolation in a row over covid-19 restrictions. The café also offered a free coffee to anyone who looks like the world number one. He has since been released from isolation but his entry into the Australian Open has not yet been confirmed. 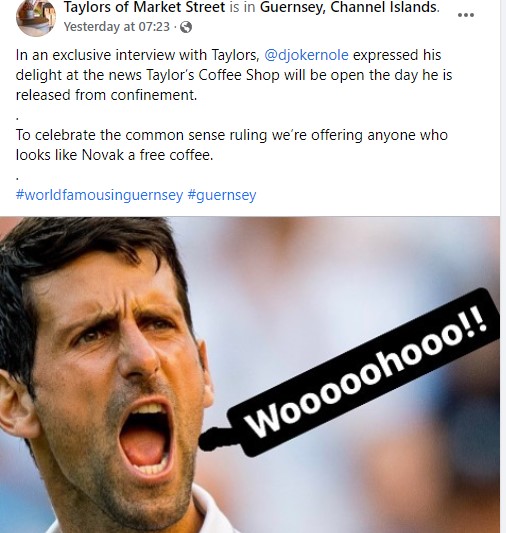 Pictured: Novak Djokovic is still hoping to play in the Australian Open, while anyone who looks like him can get a free coffee at Taylors of Market Street.

Deputy Taylor said it was the circumstances surrounding his second member of staff and the passive surveillance requirements which he found "ridiculous".

"We had lateral flow tests every morning and one positive case - so they went into isolation. The other staff member was contact traced so we closed to ensure no-one else tested positive. That was all fine, but it was the passive surveillance which was the issue," said Deputy Taylor.

"I called Public Health to check what we had to do. This was as a business owner, not as a Deputy. I wanted to check how we could safely open as we expected the second member of staff also to test positive as they were a close contact. But they never did.

"The advice was the second member of staff should not work for 10 days, even though they were testing negative daily. The flip side to that was that the positive case was required to do a lateral flow test on days six and seven and if they were both negative they could go out in the community under enhanced passive surveillance. But the other member of staff who had never tested positive still couldn't.

"But that was only the staff member who had tested positive. The one who was testing negative daily was not allowed to return to work.

"I then went back to Public Health after having those conversations and asked how I had a healthy employee with no illness who could go to other places under passive surveillance but couldn't go to my restaurant to work. I also had an employee who had been ill but could come to work but couldn't go into other restaurants at the same time.

"We couldn't make it work. So we lost five days in being closed."

Pictured: Some of the rules regarding passive surveillance are outlined above. The rest can be viewed at covid19.gov.gg

Although Deputy Taylor is not fully supportive of current covid rules or the sweeping emergency powers still held by the Civil Contingencies Authority nearly two years after the pandemic arrived in the Bailiwick, he said that he respects that they are the rules and follows them.

His café remained closed until he was confident it was fully safe for his staff and customers for him to reopen and he could fully comply with the rules as a business owner and employer.

"I am a sceptic," he said. "But I do follow the rules and I have followed the rules the whole time.

"We did expect the second employee to come down with covid too, so we closed for a day initially so she could test and to see what happened and to see what we could do, but she was fine. We spoke to Public Health and that's when this situation came about. It just doesn't quite gel. When you really read what the rules are, they are quite ridiculous."

He said that being a Deputy gave him no greater insight into the rules imposed by the Civil Contingencies Authority and it was only when reading about passive surveillance and querying what it meant that he came to the view that the current rules make little sense.