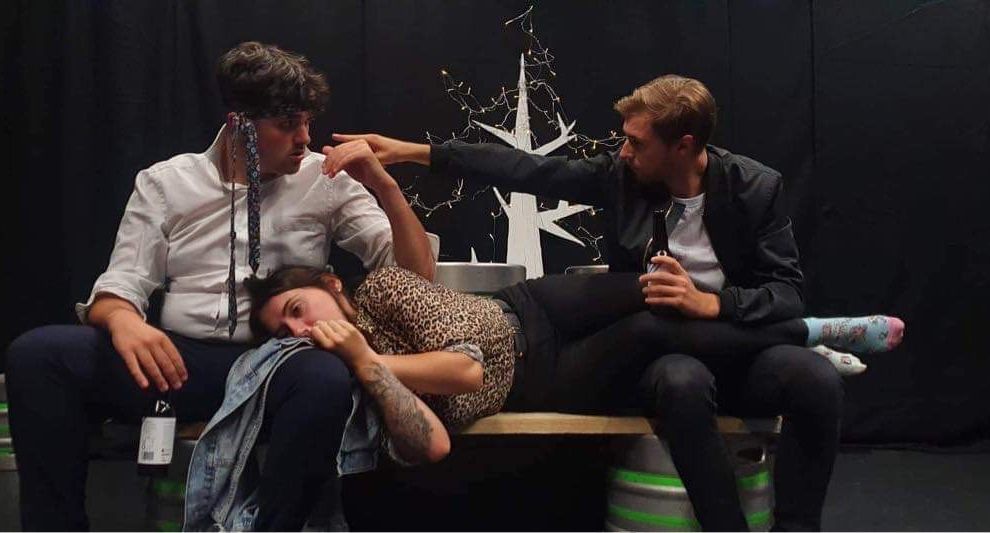 Written in 2013 by the playwright, poet and rapper Kae (formerly Kate) Tempest, Wasted tells the story of three school friends, reunited in grief on the anniversary of their friend Tony’s death, 10 years before.

Brought to Guernsey’s Princess Royal Centre for the Performing Arts by Why Not? Productions, Wasted was the first play to be performed in the newly opened Kerry Luscombe Studio.

“The script was very exciting to work with. There aren't many stage directions at all and the ones that are there can be up for interpretation and changed”, explained Director Sydney Kathleen.

Pictured: Wasted was put on by Why Not? Productions.

“It was a bit overwhelming at first because I had such free reign, but with the help of the cast, we found it was great to try out lots of different ideas. This was my directorial debut, and I couldn't have asked for a better cast. It helps that we are all good friends, but all still have such respect for each other and our art.”

A simple set, utilising only beer barrels, boxes, and 'Tony’s tree' - crudely cut out of wood and adorned with fairy lights - paved way for an immersive setting. The seating flanked the production space in an almost-vulnerable way, putting audience members mere feet away from the onstage drama and leaving the actors with nowhere to hide. Not that they needed it.

All three performers faultlessly owned their space onstage, appropriately blocking out the audience entirely when ‘in the moment’ and confidently staring them straight in the eyes when Tempest’s writing breaks the fourth wall.

Pictured: Wasted was performed in the new Kerry Luscombe Studio at the Princess Royal Centre for Performing Arts.

The play opens with our three protagonists reciting Kae’s rap-style poetry in pre-recorded audio, before Scott Riseborough (Ted) quite literally bursts onto the stage.

“Life is great, life is awful” he muses to the audience, so completely in character with every fibre of his being that I swear I see him transform from the 22 year-old that I know, to a cranky, middle-aged, borderline alcoholic with joint pain, right before my eyes.

He is joined by Jack Tostevin (Danny), a failing musician with enough naivety to believe his band is “really going places”, and Emilia Hockey (Charlotte), a struggling school teacher who hates kids and “woke up one morning and was basically [her] nan”.

The story follows a day in the life of all three as they reflect upon the 10-year anniversary of the death of Tony and navigate their own lives. We see them contemplate alone and to each other, flitting between melancholy and disillusionment of what was, what is, and what could be.

Ted is miserable. Danny is in denial. And Charlotte is at a crossroads in love and in her career.

The answer? Get wasted, of course.

With the movement of some barrels and a wooden box, we are transported from the spot where Tony’s Tree lies to a classroom, a pub, a rave, and a cafe. We see Charlotte walk out of her job without looking back and head to the local pub where she buys a drink for her and one “for Ton”.

Emilia Hockey’s embodiment of Charlotte is Eeyore-like, her movements hopeless and heavy, perfectly encapsulating how trapped Charlotte feels day-to-day. But behind her big, sad eyes, Hockey holds a twinkle of possibility that leaves the audience feeling hopeful that she might just make it out the other side and do great things before her curtain call.

She’ll be the best teacher for those kids, she declares, because they need her. “Or something”. ‘Or something’ indeed - a bittersweet reminder that life is what you make it, and no one can try for you.

On the contrary, Jack Tostevin’s lively portrayal of Danny left me wanting to sit him down and give him a good talking to. His character feels young, naive and somewhat annoying - a stark contrast to Ted and Charlotte. A character trapped in his youth, when life was good and his friend was still alive.

It is only toward the end of the play do we see the Danny that Jack has deliberately kept at bay throughout his performance. Of course he is sad. Of course his band is “sh*t”. Of course he is struggling, and the drugs are his way of avoiding it all. Mental health affects everyone, you just can’t always see it on the surface.

And while mental health isn’t funny, it’s worth noting that Wasted is funny. 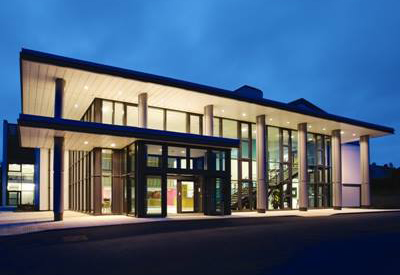 There is a scene in which all three characters are sat, (wasted, of course) on a bench or bus stop somewhere, having serious chats that make no sense. Ted (Scott) is giving Danny (Jack) a real talking to, while Charlotte (Emilia) pokes Danny’s face trying to make sense of her feelings. There is a scene where Ted is doing yoga as he gives a pep talk - his back literally, audibly cracking as he tries to stretch it out as he tells us he feels “lovely”. There is a scene the morning after, where Ted and Danny are in a greasy spoon cafe, hungover and in a state, where make-believe parents warn make-believe children “don’t look at that man!”

And while we have all been there - parties over pain, any day - perhaps the biggest lesson to take away from Wasted is not to waste your life, your chances, or what’s right in front of you.

I left Wasted feeling sad and disappointed for all three characters - a testament to the acting and to Tempest’s writing. But I also left feeling oddly inspired, my own bad day put into perspective, and hopeful that anyone in the audience struggling with their own mental health would be inspired to make a change.

“I'm absolutely thrilled that we could raise just over £160 for Guernsey Mind, a charity that has helped me through some of the most difficult times of my life,” director Sydney told me afterwards.

A great night out indeed.

Pictured top: Wasted was put on by Why Not? Productions.

GALLERY: Travel back in time at the Market Building exhibition