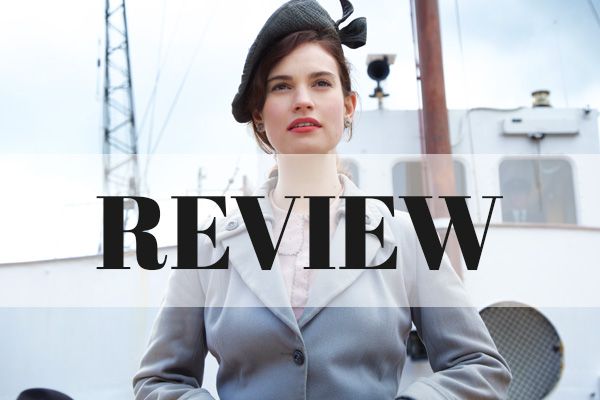 Now showing in national cinemas and locally at the Mallard, the flim's earliest screenings have already been met with strong sales here, with people keen to find out what the several-year-long fuss has been about.

Express had the opportunity to watch the film in a special screening following the local premiere, and reporter, Stephen King, has reviewed it below.

The Guernsey Literary & Potato Peel Pie Society on the big screen is a love story at its heart, for those that had any doubt, and while I am really not a romance film connoisseur, I was actually surprisingly impressed with this movie. It has been sold and sold to us islanders as a film about our history and heritage, with the Heritage Festival and a number of other local events celebrating the Occupation and Liberation of Guernsey because of how the film highlights them. But I think in reality, this is a Hollywood romance film made with our little island in 1946 as its setting - but that is no diss towards it, because it works to make an interesting movie, that does cover an area of history so many are simply oblivious to.

To get the main question out of the way quickly - the filming location worked for me. As many people are aware at this point, a great deal of criticism has already been levelled at the StudioCanal production - before most people have seen it I might add - about how it was not filmed on island, and alternatively it was done in studio and in Devon. In one word, do I think that criticism was justified? No. And do I believe it detracted from the film at all? No? The establishing shots of the films "Guernsey" are about as close to being Guernsey as they could be (without actually being Guernsey). And while so many are quick to shout that it could well have been Guernsey, they are, in my opinion, very naive to how much work and more importantly money it would have been to have that happen.

The shot I am mainly referring to is the shot of Town that is shown as the astounded Juliet Ashton sees the island for the first time from the bow of a ferry. It is clearly St Peter Port (again, without it actually being St Peter Port) and for them to have used the real Town would have taken the budget of a Disney blockbuster, with more CGI than one could possibly imagine (or afford) to remove boats, cars, new businesses, buildings, people and so much more from the picture. It wouldn't have been worth it. They do add some nice CGI Herm views into the background sometimes though, and I thought touches like that WERE worth it.

Some of the other "Guernsey" shots are of Fermain, which I really believe looked a lot like Fermain, and of the cliffs, which were all admittedly a lot larger than our cliffs (but I thought one of the locations looked a lot like Portelet). So, to those of you naysayers about the filming locations, I urge you to watch the film, and try to do so with an acceptance that it simply wasn't realistic to film over here because of so many reasons.

Now, onto the story of the legendary epistolary book (which I should point out I havn't read, but do know a fair amount about). Obviously it was not a clean transition from a series of letters to a two hour movie, but I think Tom Bazuka (the screenwriter) did a very good job of cutting away the chaff of the novel and streamlining it down to a coherent story. As he said, it was "the story of an orphan finding a family". Again, I am no love story connoisseur but it was genuinely compelling, with a decision between partners for protagonist Juliet to make that wasn't a clearly obvious one, with it being relatively clear that both choices are good ones. The story also slowly reveals the fate of the missing member of the Literary & Potato Peel Pie Society, Elizabeth, which at times did drag on a bit, but it wasn't paced too badly and none of it seemed too unbelievable or ridiculous. As I understand it from speaking to Director Mike Newell, one of the strengths of the story itself was the separation between those islanders who tried to be amicable with the Germans, and those who didn't and those threads are clear in the film and create the interesting emotional conflict, that I suppose is the strongest theme throughout. And again, those threads are compelling, with interesting characters - nothing is too frustrating or obvious in a shout-at-the-screen type of manner.

It is quite a neat story, with everything working out as Juliet Ashton wanted it to in the end, and there really isn't too much turmoil considering Guernsey had only been liberated for a year at the time. The height of the drama is the reveal of said missing characters fate, the appearance of Glen Powell's character on island, and also the revelation that the strangely catholic woman whom Miss Ashton resides with on island is searching through her things. But in the grand scheme of things, those dramatic moments dont really come to anything - they are more bumps in the road and catalysts to progress the story faster rather than events which change the course of what is already set in motion. There is one point when the focus is put on a character who indeed sympathised with the German occupiers and was now universally hated, but that also didn't really come to anything other than adding some backstory to the characters - I think some of these snap shots were used as look backs at the history, rather than really enhancing the story, but it did work in the overall scope of the film.

I think the neatness of it all is the biggest criticism I have, as someone who wasn't on island during the Occupation (or even close to being conceived, at that). But for many, a happy ending isn't a negative at all. So all in all, I came out of the theatre alongside people commenting on the tears in their eyes, and it certainly was a teary film. From a historical accuracy point of view, I think it is as close as can be expected from a novel based on source material which is questionably accurate in itself, there were a couple of moments which made me shake my head at overdramatisation (I'm mainly referring to when about 20 Germans snap on some floodlights and start shouting typically Second World War German words very loudly), but then there were others which made me proud to be from the island like Sir Tom Courtenay's rendition of Sarnia Cherie or Michiel Huisman's snippets of Guernesaise.

The most stunning part of the whole experience was the repetition of that feeling islanders get when Guernsey is mentioned on the big screen - like when it is the answer on a quiz show or it makes national headlines - and that happened all the way through this film, I did need to keep reminding myself "this film is about where I live". It's certainly worth a watch for anyone from Guernsey, and it's - somewhat unexpectedly for me - good enough to warrant the same from someone who isn't affiliated with it.

A film for "the summer our teens didn't get to have"