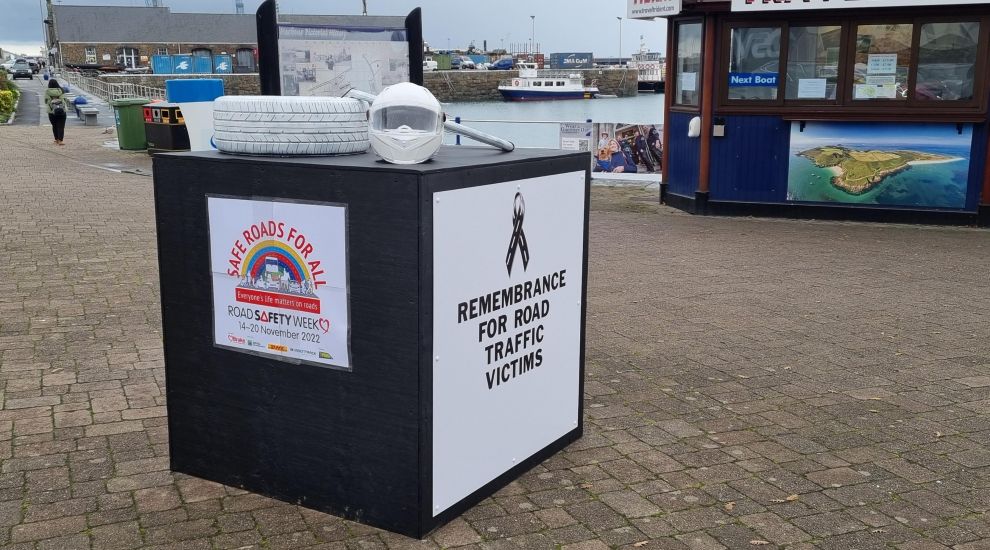 Guernsey is participating in World Day of Remembrance for Road Traffic Victims this Sunday, with a bicycle ride also planned to commemorate the life of Eleanor Carey who died in an accident in London.

It is believed to be the first time the island is participating in the United Nations-recognised day of remembrance.

A monument was placed opposite the Trident Kiosk at the start of Road Safety Week by several local stakeholders to help raise awareness of victims, road safety and to call for investment in infrastructure.

The Guernsey Bicycle Group has installed the temporary monument, which is supported by the Eleanor Foundation, Smile for Georgie Foundation, Guernsey Motor Traders Association, Better Journeys Project, and Living Streets.

#BeSafeBeSeen – it’s a term that’s been around for a while now, but it’s still as true as ever. That’s why PCs Shields and Turton have been down at the Weighbridge this week giving out free high-viz vests, which have been donated by Living Streets as part of #RoadSafetyWeek. pic.twitter.com/jI2nQOYO57

Police Officers have also been handing out free high-visibility clothing to passersby.

The day also pays tribute to the emergency crews, police and medical professionals who deal with the traumatic aftermath of road death and injury.

The Eleanor Foundation is also inviting the public to join in a charity cycle ride on Sunday, marking the 10thanniversary since its first charity ride to mark the death of Eleanor Carey who was killed on her bicycle 11-years ago in London.

The ride, which is limited to 90 individuals, will set off from Grandes Rocques at 10:30 and finish at the Bathing Pools, where refreshments are available.

Those interested are asked to register online HERE before the end of the day.

Allister Carey, Eleanor Carey's father, a Director of the Eleanor Foundation, and a GBG committee member, said safety should be in everyone’s minds throughout the entire year.

"There are three key words to remember: Think, understand, and remember. We should be thinking about how we can all use roads safely to protect ourselves and other road users; we should understand how safe roads can enable everyone to make safe and healthy journeys; finally, we should remember road crash victims,” he said.

The Guernsey Bicycle Group committee added: "Everyone deserves the right to share the road safely, yet every day vunerable road users, especially pedestrians and cyclists, are at risk on their journeys to school, work and see family and friends.

"The increase in walking and cycling as part of everyday life around Guernsey for health, cost and climate reasons is not being met by action to improve safety on Guernsey's roads. Until this improves our community needs to be extra vigilant in looking out for each other."

There are around 1.3 million road deaths globally yearly, with many more injured. Road traffic crashes are a leading cause of death among young people and the main cause of death in the 15-29 age group, according to the World Health Organisation.

In Guernsey, there were 348 vehicular collisions reported locally in 2021 – an increase of 38 incidents on the previous year.

Two fatalities, nine serious injuries and 96 slight injuries were recorded in association with these.

Two involved a pedestrian, six a driver or rider and one involved a vehicle of pillion passenger.

Police also dealt with 110 drink driving offences, 71 instances of driving without due care and attention, four cases with no crash helmet.