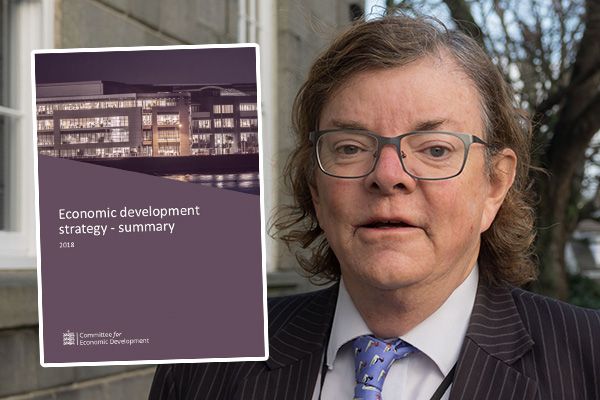 The President of Economic Development; Deputy Charles Parkinson, has given an outline of his committee's new strategy, while speaking at the IoD's May Lunch.

He gave a speech on Friday 25 May, about how he thought the island needed rebranding, to change international political stigmas against the name Guernsey; whether they are true or not.

He also emphasised how his committee will continue to support the finance industry, as they work on a vision for what they think the economy should be in 2030.

"I think over the next 12 years, we need to slowly rebrand Guernsey. If you go away and ask someone in the streets of the UK about Guernsey, the first word would be tax haven, and we can argue with that all we like and tell them about transparency and regulation compliance, but that is the way they see it, and I don't think that is in our best interest.

"We need to rebrand ourselves so the world at large sees us differently."

"The economy is pretty healthy at the moment, but it is also quite fragile, there are challenges that we need to prepare for at the moment. I read in the paper in a column that there are three ways we could go from here, firstly to go into a managed decline, or we could 'join me on our march to the sunlit uplands', or we could trust in luck.

"Now I don't entirely dismiss that last point, over the years I think we have had our fair share of luck. But I think we can make our own luck, or at least improve our chances, something we plan to prepare the groundwork for."

During his speech, Deputy Parkinson referred to the '20 action' ideas the committee released with its strategy (below). 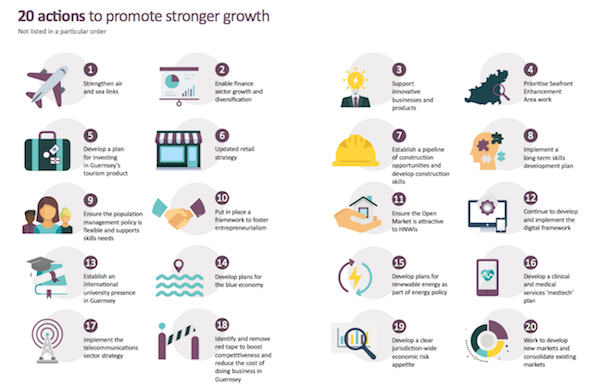 He said realistically, none of them are going to come to fruition by the end of this States term in two years, but he said the point was for them to be ideas, and if, as they went down the pipeline, they didn't work out, they could be scrapped.

But if they were successful, they could be continued. "By the end of this term, I really expect the list to be down to a smaller number then 20, but it is open ended as well, we are always welcoming ideas about what should be focused on."

He added that some ideas, such as the redevelopment of the seafront, would, in his mind, never be achieved within one States term by a committee, and thus would need some kind of long term development vehicle. Those are currently something the committee is looking at for a number of projects.

Deputy Parkinson also addressed questions as to how the 20 points would be individually prioritised with this point, as he said as each was worked on, they would be slowly thinned out.

Plans to expand Guernsey's main industry outward were also floated. While Deputy Parkinson assured support would be continued to the finance industry, he said it would be ideal to use the resources of that industry to expand laterally, and capitalise on the potential of the digital industry and other areas.