Raft of amendments to anti-discrimination legislation 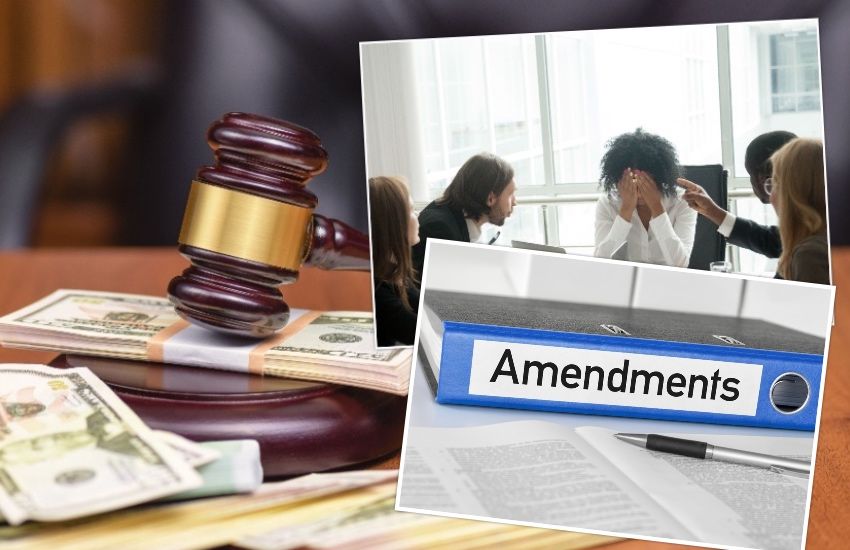 Raft of amendments to anti-discrimination legislation

11 amendments to Guernsey’s first anti-discrimination legislation have been submitted for debate next week, the majority of which range from “harmless to outright destructive” according to the deputy leading the proposals through the States.

Deputy Peter Roffey, President of the Committee for Employment & Social Security, said the committee will meet today to discuss the flurry of amendments lodged before those, and the prevention of discrimination ordinance, are debated at next week’s States Assembly meeting, commencing on Wednesday 28.

He added that amendment one – submitted by His Majesty’s Procurer and His Majesty’s Comptroller – “won’t be challenged” by the committee since it only seeks to correct a typing error within the ordinance.

Deputy Roffey also doubts that amendment two – proposed by Deputy Yvonne Burford and seconded by Deputy Peter Ferbrache – will be challenged by ESS either. That amendment seeks to bring Guernsey’s proposals in line with the UK Equality Act 2010 where both religious and non-religious beliefs have equal standing to benefit from discriminatory protection.

But some of the remaining nine amendments are likely to face opposition from the proposal-leading committee. You can view the ordinance and list of amendments HERE.

Amendment number 1 won't be challenged by committee [correcting a typo] and I doubt number 2 will either as it is asking for what the committee first proposed. The other 9 range from harmless to outright destructive. ESS will meet tomorrow to discuss.

Deputies Bob Murray and Sam Haskins are seeking greater parliamentary oversight on future changes and applications of the law through regulation, currently only vested in ESS. Their explanatory note reads: “It should be possible for [States] members to consider and debate such changes.

“As the Ordinance is to apply only to Guernsey and bearing in mind the power of the Policy & Resources Committee to enact Ordinances in the event that any urgent amendment is necessary, they do not believe that inclusion of such extensive regulatory-making powers without States oversight is desirable.”

Deputy Haskins is also leading another amendment, seconded by Deputy David Mahoney, to exempt landlords who live within their own rental properties from the law.

“It is our belief that the wording of a ‘house of multiple occupation’ was intended to only cover properties on the Open Market D register- not for those sharing multiple spaces in the live-in landlord’s primary home, i.e a house share.”

“The assembly is asked to support this amendment to make sure the ordinance is meeting the original intention of exempting a person offering multiple rooms to friends (or otherwise) in their own home.” 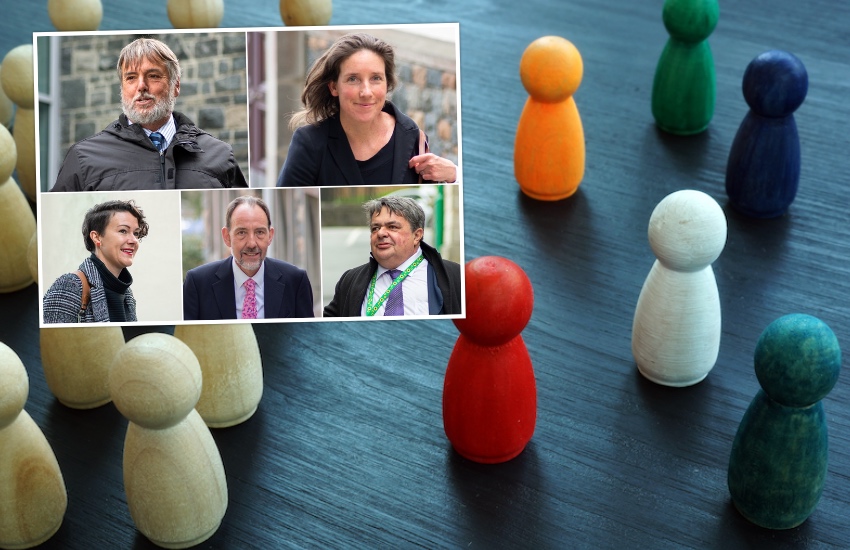 Pictured: The Committee for Employment & Social Security will bring the legislation to the States for approval next week.

Deputies Nick Moakes and Simon Vermeulen want the maximum amount of compensation, payable as part of the 'injuries to feelings' award, halved from £10,000 to £5,000.

They claim that the proposed maximum penalties could have “a devasting effect on smaller business which is clearly not the intention of the ordinance”.

“We need to ensure that Guernsey remains competitive, retains existing business, and continues to be an attractive jurisdiction for inward investment.

Deputies Chris Blin and David de Lisle also want the States to exclude businesses with five or fewer employees from the law to “reduce the financial and management pressures” on small companies. 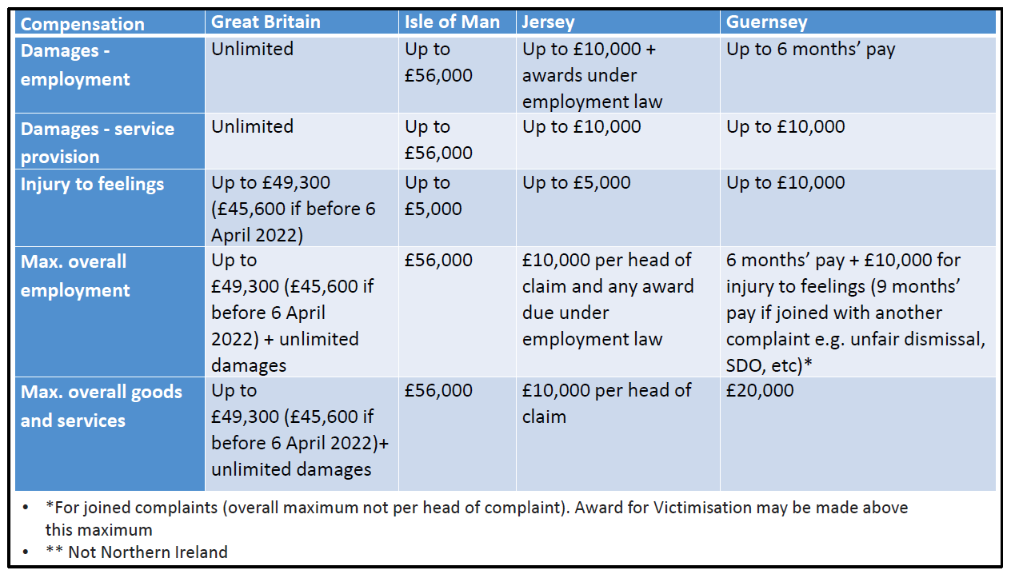 Pictured: A comparative breakdown of maximum penalties awarded in the British Isles, compared to the proposed totals in the current form of Guernsey’s anti-discrimination legislation. Credit: Guernsey Disability Alliance.

Deputy John Dyke has proposed two amendments. The first, seconded by Deputy Chris Le Tissier, seeks to redefine which contracts of employment the law will apply to, removing the outlawing of pay disclosure provisions, and reducing the maximum time for pay claims from six to three years.

They add that pay disclosure provisions are “commercially common practice” and should not be outlawed for “obvious competitive reasons”.

Deputy Dyke’s second amendment, seconded by Deputy Susan Aldwell, seeks to “remove the disapplication of the maximum award limits where there is a complaint of victimisation as part of a joined complaint.”. 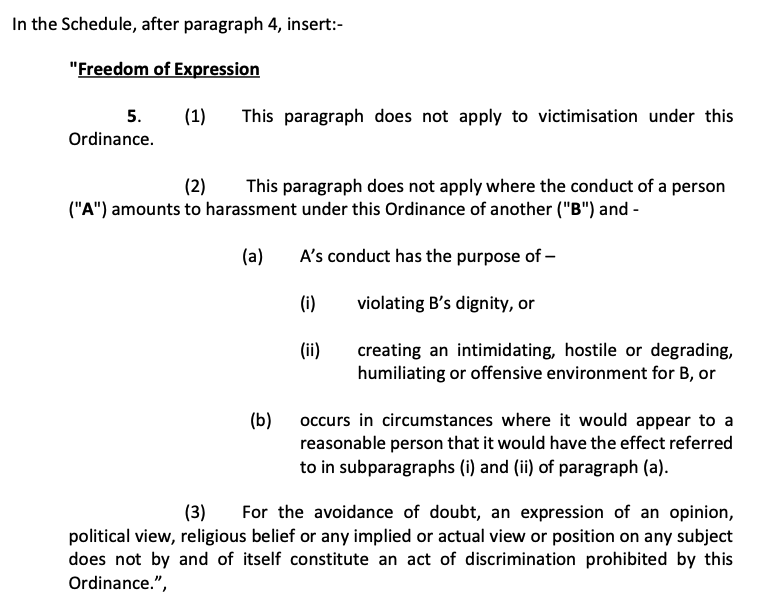 Deputies Aidan Matthews and Lester Queripel want protections on freedom of expression added to the law, as they are not “explicitly stated within” the current ordinance.

Another, proposed and seconded by Deputies Ferbrache and Mahoney respectively, seeks to “reduce potential conflicts” between any anti-discrimination legislation and the immigration and population policies pursued by the States.

And Deputies Carl Meerveld and Marc Leadbeater are seeking to limit the exposure of clubs and associations, allowing them to “differentiate based on professional skills and qualifications”.

GPEG says only lawyers will benefit if deputies back new law