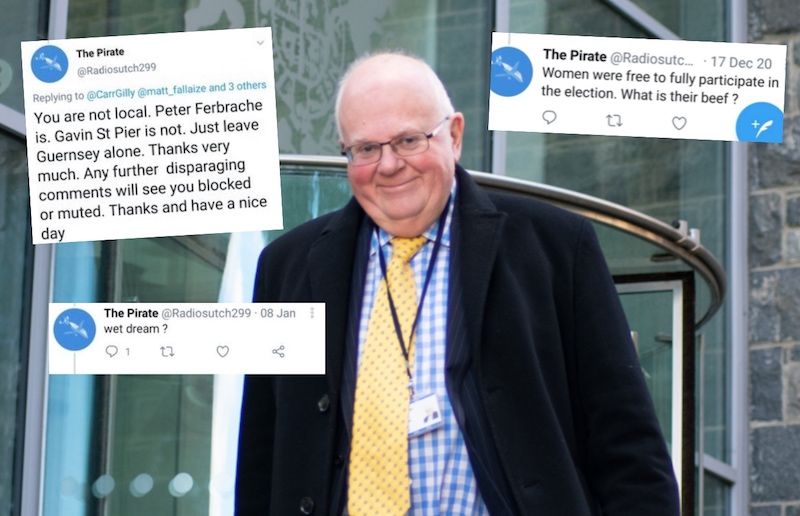 A recently-elected Deputy has refused to deny allegations that he has been using pseudonyms on social media to comment on political issues, criticise "non-locals" and troll States colleagues.

Guernsey Party Member Deputy Chris Le Tissier was contacted by Express following claims on social media that he is the man behind the controversial tweets, which have subsequently been deleted.

The tweets were presented as the views of a concerned member of the public rather than an elected official.

After Deputy Le Tissier declined to be questioned on the issue, Express raised it with his political party. The Guernsey Party then distanced itself from personal comments which are alleged to have been made by one of its political representatives.

Shortly before it replied to Express's enquiry yesterday evening, the party locked its Twitter page - where some of the allegations have been made - attributing the decision to "forceful left wing" critics for their "vitriolic" comments on party posts.

The claims have been made online by numerous political figures and members of the public, linking two accounts – the ‘Radio Sutch’ Youtube page and a now-deleted Twitter account ‘The Pirate @Radiosutch299'

The Youtube account, which belongs to a Guernsey-based aviation enthusiast, documents its owner’s experiences of travelling across the Channel Islands and further afield.

Pictured: A video filmed by and featuring Deputy Le Tissier, dating back to 2015, was taken offline last week after reappearing on social media.

The similarly-named Twitter account has been linked to Deputy Le Tissier by several Deputies, former politicians and other members of the public offended by the author's comments, which the Deputy has so far not rebutted.

Among a slew of tweets in December, 'The Pirate' stated that Holocaust Historian Dr Gilly Carr should "leave Guernsey alone", criticising the "non-local" following her push for Guernsey Policemen convicted in 1942 for stealing from the Nazis during World War II to receive posthumous pardons.

In the same post, he suggested that Policy & Resources President Peter Ferbrache deserved to be Chief Minister because “he is local [and] Gavin St Pier is not."

In a separate thread, Deputy Le Tissier’s official Twitter page - accompanied by his manifesto picture - is tagged into an exchange. ‘The Pirate’ replies to the comment and neither that account, or Deputy Le Tissier's account denies the link. 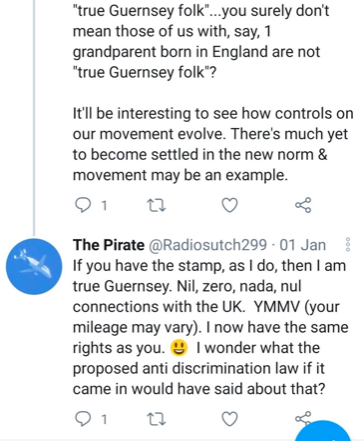 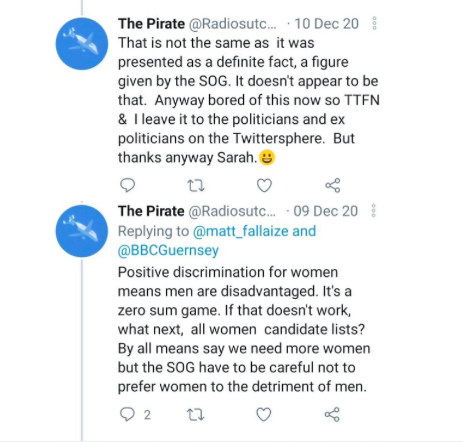 Pictured: Some of tweets posted by 'The Pirate' before the account was deleted.

Asked directly if he was the man behind ‘The Pirate’, Deputy Le Tissier told Express: “I am not passing comment to the media on [about] social media.”

Asked if he would refute the numerous public allegations that he was in fact ‘The Pirate’, he again declined to comment.

Asked if the social media activity would be inappropriate for an elected official to make, he said: “I am not passing comment to the media on [about] social media.”

Following Deputy Le Tissier’s refusal to comment on the matter, either to explain or to reject the claims, Express sent questions to the Guernsey Party, of which he is  a member, asking if they were aware of any links between Deputy Le Tissier and this social media activity. 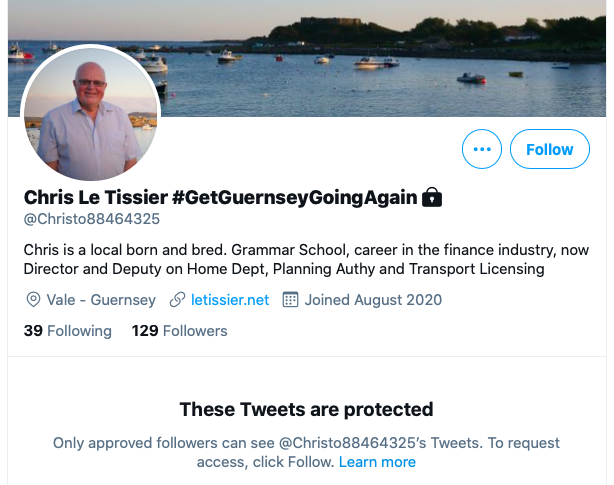 In their response, a spokesman said the Guernsey Party “has not sanctioned or taken part in any of the personal social media activity you allege”. The party said it was a matter for Deputy Le Tissier to respond to personally.

"The Guernsey Party does have an internal code of conduct in relation to the behaviour of its representatives,” they said. “We have not received any complaint and generally speaking private social media accounts are personal matters for representatives.

"Deputies are also bound by the States code of conduct and the Party of course does not condone any behaviour by an elected representative in breach of that code.

I’m not so sure, Dave. Seeing as you run the party’s now private Twitter account, perhaps you can tell the voting public what action will be taken against your member’s apparent anonymous trolling? pic.twitter.com/qqUQUIplXw

Pictured: Journalist Rob Byrne called on the Guernsey Party to reveal what - if any - action the group would take against the alleged trolling.

Shortly before the party sent its response, the party published a new social media policy, in which it announced that its Twitter page would be made private.

"Our Twitter page is now “protected” and is only open to persons approved by us. The purpose of the Twitter account is simply to keep our many supporters and the local mainstream media updated regarding our announcements and activities."

Users who recently criticised the party for a blog post about women in the States are understood to have been blocked, while anonymous followers who have been "unintentionally blocked" have been asked to apply if they want to view the Twitter account.

"Unfortunately, it has become apparent that there are a small number of members of the Twitter community whose sole objective appears to be to collectively attack every single tweet of ours with vitriol," the party wrote. 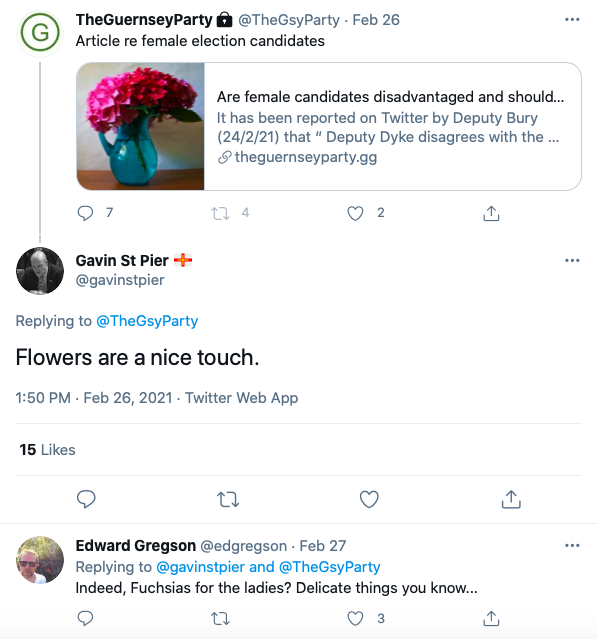 Pictured: A recent blog post attracted criticism in some quarters for the way it presented female States candidates.

"Some of these are bitter ex-deputies who lost their seats at the 2020 election and who will never be remotely supportive of The Guernsey Party, as a centre-right party.

"The Guernsey Party will clearly never win the votes of those with forceful left-wing views and that’s absolutely fine. We genuinely wish them well but the Party was not formed with them in mind. However, we do not have either the time or inclination to spend hours on Twitter trying to counter their views, which clash so much with the policies that we openly stand for, when it is so evident that healthy, respectful debate will not happen.

"So we are going to simply avoid the pointless noise and unwelcome distraction and instead focus on matters which will be far more productive in trying to serve the electorate and improve the Island for the rest of this term and beyond."