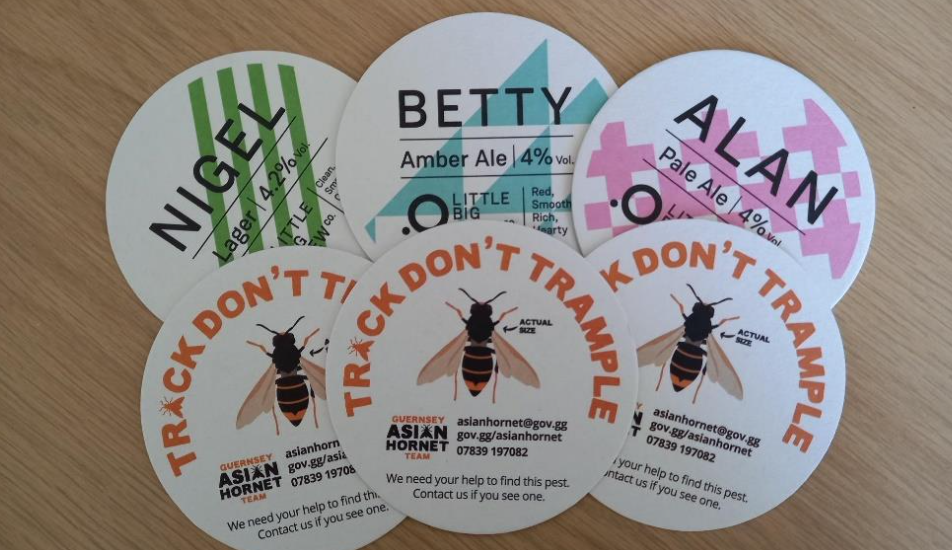 The Asian Hornet Team have teamed up with the Little Big Brew Company to create informative beer mats, asking people to keep an eye out for Asian Hornets, which have recently been showing a liking for pint glasses.

The Asian Hornet Team's is raising awareness of its ‘Track Don’t Trample' approach to controlling the invasion of the species into Guernsey.

Nine queen Asian hornets were found during the spring. It’s imperative the team find the queens, not just the workers, so that nests can be destroyed and the threat to bees and other local species is mitigated.

Pictured: Several Asian hornets have been photographed near pint glasses, triggering the idea for the beer mats.

“We are always looking for new ways to raise awareness of the Asian hornet invasion and improve our ability to control them,” said Project Coordinator for the Asian Hornet Team, Francis Russell.

“This beer mat initiative provides a really exciting opportunity to work in partnership with a local business to protect Guernsey’s pollinating insects and public health,” she said.

The mats will promote the key message of observing and reporting sightings of Asian Hornets, instead of simply killing them. This helps the team find nests to remove.

“Now Nigel, Alan, and Betty (the names of our beers) are also on the lookout for Asian hornets for the rest of the summer, we hope the public get behind the campaign,” said Development Director of Little Big Brew Co., Simon de la Rue.