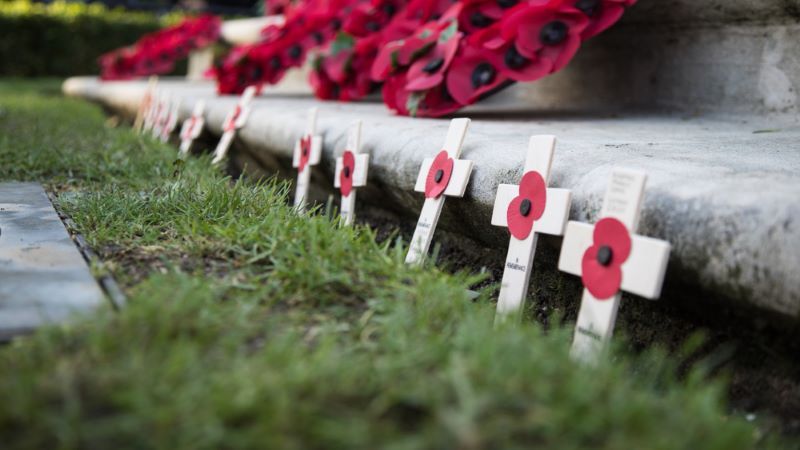 The Bailiwick fell silent today - in the fitting words of the Bailiff, Richard McMahon, "to remember and give thanks to those who have given their lives in the cause of peace and those who, even today, are prepared to make the ultimate sacrifice so as to maintain peace around the globe".

Guernsey's most senior politician, Deputy Peter Ferbrache, was at the National Service of Remembrance at the Cenotaph in London to lay a wreath on behalf of the governments and people of the Bailiwick, honouring those who fought and died in both World Wars and other conflicts.

It is only the second time that a representative of the Bailiwick has attended the service to lay a wreath. Before 2019, the Bailiwick of Guernsey, along with the Bailiwick of Jersey and the Isle of Man, was represented at the ceremony when a wreath was laid on behalf of Her Majesty The Queen.

"It is an honour for the Bailiwick of Guernsey to lay a wreath at the Cenotaph to commemorate the contribution and sacrifice of men and women from our islands during the two World Wars and other conflicts," said Deputy Ferbrache.

"I feel deeply privileged to attend this service to represent the people and governments of the islands of Guernsey, Alderney and Sark."

Chief Minister Peter Ferbrache has today laid a wreath at the Cenotaph on behalf of the Bailiwick to commemorate the contribution and sacrifice of men and women from our islands in two World Wars and other conflicts. #remembrancesunday pic.twitter.com/VMHcI9KCkB

Pictured: Deputy Peter Ferbrache was in Whitehall to lay a wreath at the Cenotaph on behalf of the people and governments of the Bailiwick. Her Majesty The Queen was unable to attend due to a strained back.

In Guernsey, an Act of Remembrance was held at the Island War Memorial in Smith Street. Several wreaths were laid, including by the Bailiff, Lieutenant-Governor Sir Ian Corder, HM Procureur Megan Pullum and Deputy John Gollop, the longest-serving member of the States.

The Dean of Guernsey, the Very Reverend Tim Barker, said it was "a powerful and moving ceremony with a large crowd and precision marching". He said that the wreaths laid "represent the whole spectrum of Guernsey life".

A powerful and moving ceremony with a large crowd and precision marching. The wreaths represent the whole spectrum of #Guernsey life. #RemembranceSunday #RemembranceDay2021 pic.twitter.com/iZ30ZYaiCO

Representatives of St John Ambulance Guernsey participated in events in London and Guernsey.

At 11 o’clock on #RemembranceSunday we stood in silence to remember the fallen at the Bailiwick Act of Remembrance. Wreaths were laid by the Emergency Ambulance Service & St John Ambulance Guernsey. Our volunteers were also on first aid duty. @GvHouseGuernsey @TimBarker10 pic.twitter.com/UG9iKLWRmU

In Guernsey, a wreath was also laid by two German officers from the Allied Rapid Reaction Corps, which is based in Gloucester. Earlier in the day, they paid their respects at the Fort George Military Ceremony to mark Volkstrauertag, German's Day of Mourning.

Video: The Principal of Elizabeth College, Jenny Palmer, shared a short video of the Combined Cadet Force Corps of Drums marching at the Island War Memorial.

Bill Abel, Chairman of Alderney's Policy & Finance Committee, said: "On Sunday, the people of Alderney will remember and honour those from Alderney and the wider British family who gave their lives for their countries."

Conseiller John Guille, Chairman of Sark's Policy & Finance Committee, said: "On this Remembrance Sunday, Chief Pleas of Sark pause to remember all those who left our island to serve in all the armed forces and gave their lives for our freedom."