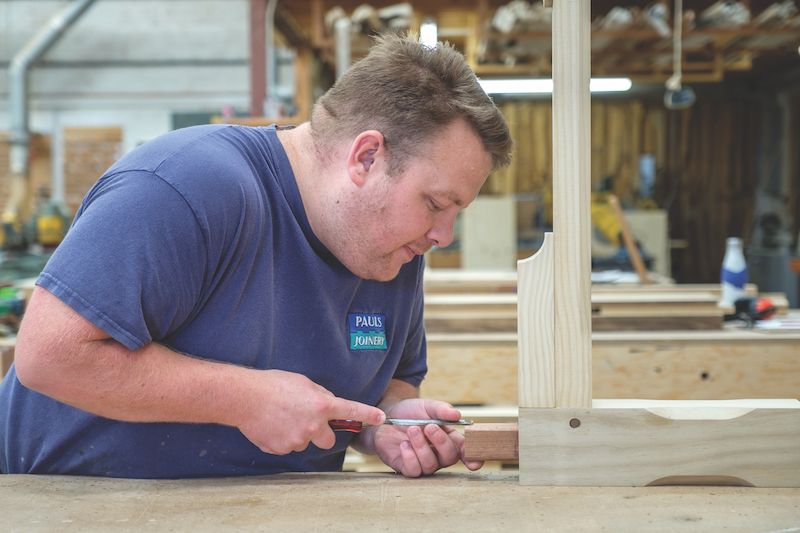 Rebuilding the iconic Japanese Fishing Pavilion at Saumarez Park was a once-in-a-lifetime opportunity for the tradesman who has spent over 500 hours on the project.

In mid-September, two years after disrepair forced the closure of the original Pavilion, the Bailiff will open a new Pavilion closely modelled on its predecessor.

The project, which cost tens of thousands of pounds, has been led by the Rotary Club of Guernsey, partly to commemorate its centenary year.

The Project Manager, Rotarian Nigel Dorey, has a long association with the Pavilion. While employed by States Works, he led its restoration in 1989 after extensive damage caused by vandalism and fire. This time, restoration was out of the question. The original structure had to be replaced in full.

“We were looking for a special community project to mark the centenary of the Rotary Club, which is in 2022/23. We wanted to do something the public would really appreciate.

"We made some investigations with the States’ Committee for the Environment & Infrastructure and they were very supportive and delighted at the prospect of Rotary leading a renewal of the Pavilion. They hoped it could be done as soon as possible and so we agreed to do it this year as an early centenary project." 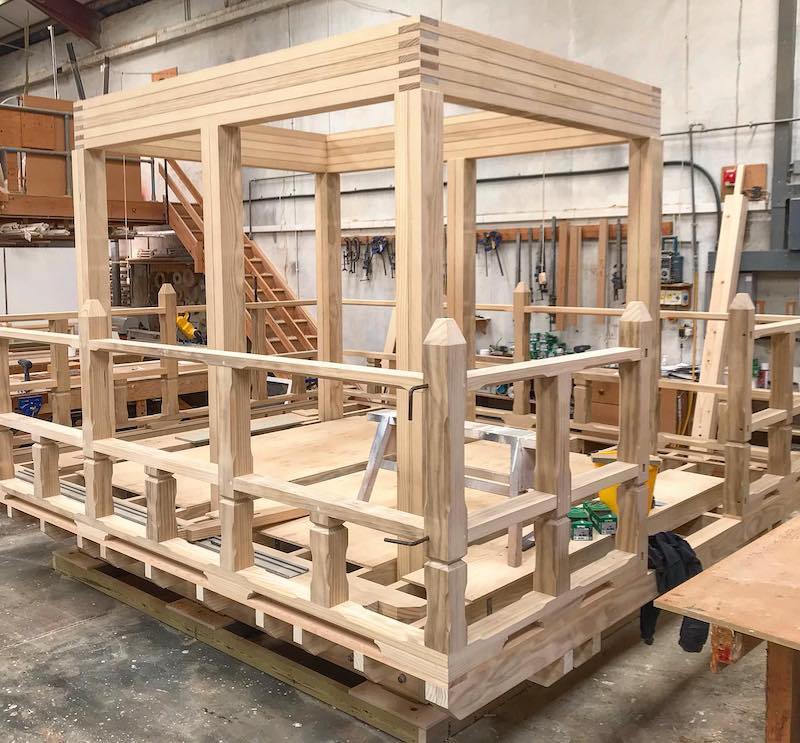 Pictured: It took around 10 weeks and over 500 hours to build the Pavilion in Paul's Joinery's workshop at Bulwer Avenue.

Mr Dorey continued: “It’s such a beautiful, iconic building. Almost everyone in Guernsey will have been there as a child or with their children or grandchildren. Everyone who has commented on the project has been so positive. I can’t remember a single negative comment on social media or anywhere else.”

The original Pavilion was constructed in the mid-1930s when the estate was owned by the 4th Baron de Saumarez, James St Vincent. He had fallen in love with Japanese culture and architecture while holding a diplomatic post in the country.

A Japanese tradesman came to the Island to assemble both the Pavilion and a Japanese house which sadly did not survive the Occupation. When the roof of the Pavilion was taken down, inscriptions were found of the names of the three people believed to be the original builders: C. Mallandine, K D Rich and John Parsons.

The new Pavilion was constructed essentially as a replica of the original with a couple of extra features then added – vertical balustrades and higher handrails – to meet modern safety expectations. The path leading to the Pavilion has been raised to make it more accessible.

The new Pavilion was built from scratch by local firm Pauls Joinery – primarily by Will Le Lievre, one of the Island’s outstanding skilled craftsmen.

Brian Acton, who will take over as President of the Rotary Club for its centenary year, cannot praise Mr Le Lievre highly enough.

It took him around 10 weeks and over 500 hours to build the Pavilion in the firm’s workshop at Bulwer Avenue. It is not his first landmark project.

In 2016, Mr Le Lievre restored the historic 18ft water wheel at Les Niaux, which now features on the Guernsey £10 note. But the pavilion project, in particular, brought back many happy childhood memories.

"It’s a nice feeling to know I will always be able to go to the Park, look at the Pavilion and think to myself that 'I built that'"

“My gran – my mum’s mum – used to take me to the Pavilion," said Mr Le Lievre. "She lived at Les Blancs Bois, just down the road from Saumarez Park. As a child, other than the playground, the Pavilion was the most interesting thing at the Park.

“At the start of the project, we were down there with crowbars ripping up the floor and basically taking apart this structure where I had played as a child. Something about that felt wrong, although obviously it was in the knowledge that we would replace it with something better.

"It’s a nice feeling to know I will always be able to go to the Park, look at the Pavilion and think to myself that 'I built that' and my handiwork helped make it the way it is and lots of people will enjoy seeing it and using it."

“First we had to get into the old Pavilion and take measurements. It was clear that it was in serious disrepair – far beyond anything which could be restored. The brief was a like-for-like replacement. With all the measurements, I was able to draw it out in full-scale on the CNC [Computer Numeric Control] machine.

"That gets you down to extraordinarily small measurements. It was reported somewhere that the new Pavilion was not constructed to the same dimensions as the old one – well it certainly was. We had one of the latticeworks from the original roof and it was only about 3mm out from my roof – so it shows just how close we are to the original."

The new Pavilion uses exceptionally durable wood. “If you maintain wood, it can last decades, even centuries. The wood we’ve used is pretty indestructible, but it will need to be looked after with coats of stain and varnish every so often otherwise moss will get onto it and take hold.

“The cedar shingles on the roof will have a shorter lifespan, but as long as they’re replaced as necessary there is no reason why the structure underneath shouldn’t remain in good condition.”

Mr Le Lievre is quick to thank his boss for allowing him to lead the construction and for his support throughout the project. “Although Paul hasn’t taken any credit, he’s done a lot behind the scenes. Paul did the latticework and the ring beam and all the organising at our end. Without Paul, it wouldn’t have gone as smoothly as it did.” 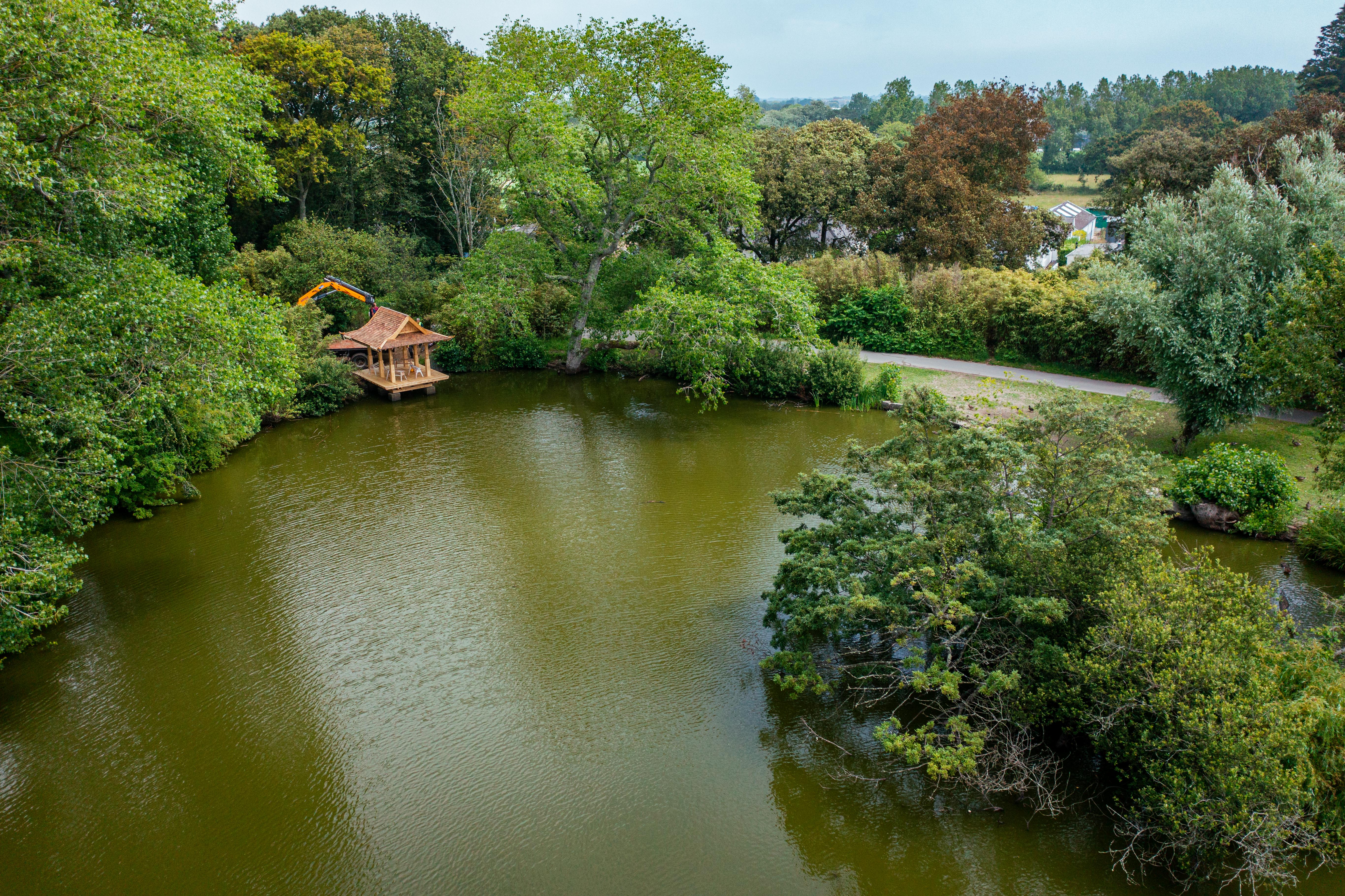 Pictured: The original Pavilion was constructed in the mid-1930s when the estate was owned by the 4th Baron de Saumarez, James St Vincent. He had fallen in love with Japanese culture and architecture while holding a diplomatic post in the country.

Deputy Lindsay de Sausmarez, President of the States’ Committee for the Environment & Infrastructure, which is responsible for the Park, is delighted with the new Pavilion.

“It is a unique part of our heritage which has been used by generations to enjoy the pondlife, the bird life and the landscape beyond,” said Deputy de Sausmarez.

“We and our predecessors submitted multiple bids for the funds needed to restore this iconic structure, but much to our frustration and disappointment every single bid was rejected. It became clear that, because of the criteria used to allocate minor capital funds, this project would never be prioritised, and so we had to find a different way forward.

“We knew there was a strong desire in the community for the pavilion to reopen, but we were blown away by the breath-taking generosity of the offers of help.

"The financial support, the time and the expertise that has been so kindly donated by various organisations, businesses and individuals has been incredible, and the restored pavilion is proud testament to their generosity, dedication and workmanship. We thank them enormously. I’m delighted that islanders and visitors can once again enjoy this architectural jewel in the crown of this special piece of Guernsey’s public realm.”

The project will be enhanced with the planting nearby of trees which originate from seedlings of trees which regrew after the atomic bombing of Hiroshima. This is part of a peace initiative run by Rotary International.

Posted by Mark Lang on Aug 28th, 2021
Congratulations to all those who have been involved with the restoration of the Japanese pavilion. It does you all credit.
But the big question is, Will the States maintain it?
Their record in maintenance is appalling.
To place a comment please login Login »