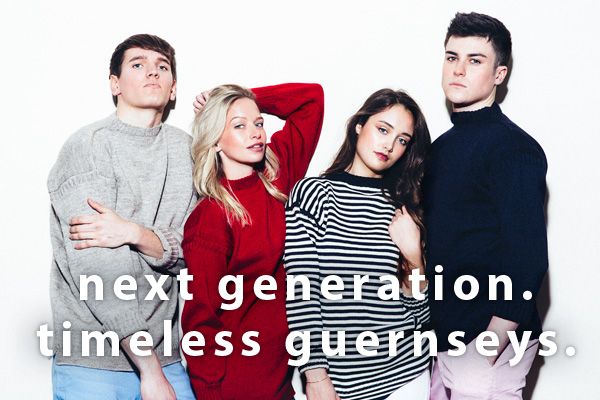 Creasey's have given Guernseys a glamorous make over as the jumpers move to centre stage in the fashion world with a new campaign centred around encouraging people to pick up the traditional local pullover.

The firm are selling a selection of both traditionally styled and new coloured Guernseys in their stores, all locally knitted and made, but they are hoping to prove some of the older stereotypes attached to the jumpers aren't all that true.

The plan is to get the "next generation" kitted out with their new "timeless Guernseys".

"We sell Guernseys in our store and it has always been a firm favourite of the directors (Creasey's) Peter especially wears one himself and has always been keen to keep them in the store and try and encourage locals and visitors to invest in one.  They are such a huge part of our history and culture but the general perception of them are that they are for fishermen and somewhat itchy," Creasey's Jo Babbe said.

"Getting imagery for the jumpers is also very difficult, so trying to promote them isn't the easiest.  With all this in mind, I thought about the idea of creating our own imagery by doing a photoshoot and to try and reinvent the Guernsey as such.  To show that it isn't just for older generation and fishermen and can actually be classed as a statement item for you wardrobe that will not only last you decades but you own something that is part of Guernsey.

"I knew there were other colours and designs out there and I thought that we would have to introduce them to appeal to the younger generation.  We kept the original blue, the oatmeal and charcoal but introduced two new brighter, more fashionable colours, tartan red and Navy Breton stripe for the shoot - once the campaign had launched, our menswear buyer also ordered in a Corvett Blue as an extra colour to the mix."

The Guernseys are available at all of Creasey's clothes shops on island, and are unisex so can be purchased at either the menswear or the womenswear departments. The plan is for the store to have them in stock for the foreseeable future, with orders also available in store within a day.

"The original Navy Guernsey dates as far back as the 16th century and it still retains much of the original design and patterning such as the rib at the top of the sleeve represents a sailing ship's rope ladder in the rigging, the raised seam across the shoulder, a rope and the garter stitch panel is waves breaking upon the beach," Ms Babbe added.

Pictures by Etienne Laine as part of the new modelling shoot done by Creaseys.