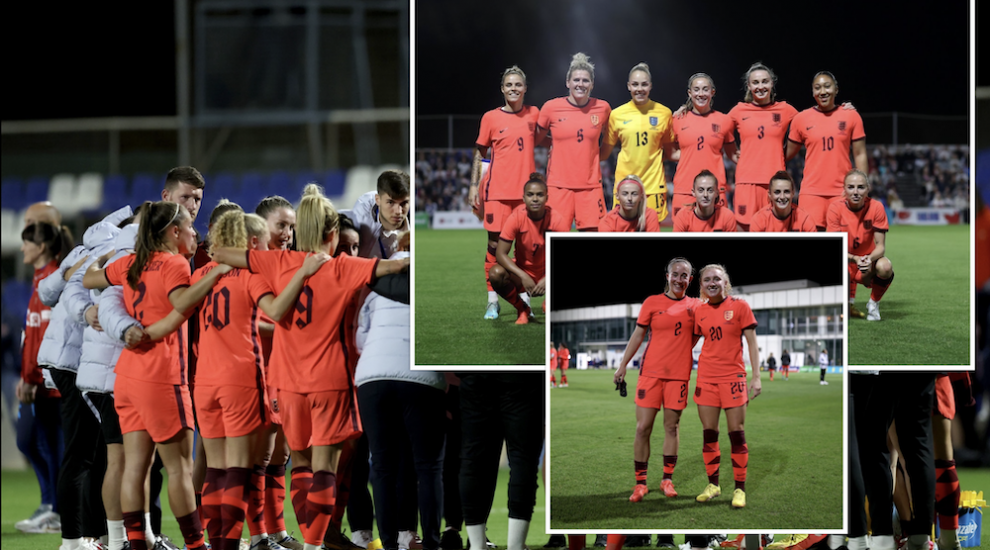 Having already played for the Lionesses U23 side, she said being selected for and playing for the senior team is the "pinnacle" of her career so far.

The 20 year old from Guernsey, is signed for Manchester United, having previously played for Brighton and Saint Martins.

She grew up playing alongside the boys at Blanche Pierre Lane before relocating to the UK to pursue her dreams of a professional football career.

Her speedy progression to the starting 11 in a national game has been welcomed by those around her on the pitch, in her coaching teams, and football fans.

Ready to make her England debut.

The game ended 1-1 between England and Norway with the goals scored by Rachel Daly who put England ahead in the first half before Frida Maanum equalised in the 80th minute.

Norway were down to 10 women during the second half after Anja Sønstevold received her second yellow card.

Maya Le Tissier, proudly wearing the No. 2 England shirt, was praised for her performance during the match. She was shortlisted for the player of the match award by sponsor EE.

Who is your @EE player of the match?

Debutant Maya was joined on the pitch by fellow first time Lioness, Katie Robinson. Maya said it was a moment she had always dreamt of and will never forget.

"It's a dream come true. Obviously this is a pinnacle of, when you're playing when you're younger, I always dreamt of this moment and I'm thankful it's come about," she said with a huge smile on her face after the match.

The one-all draw means the Lionesses remain unbeaten in 2022.

Their next match is not scheduled until next year now.

They're due to play Brazil in the first-ever women's Finalissima in April next year. Tickets are on sale now for the match scheduled for 6 April 2023 at Wembley Stadium.

Pictured top and above: All images and tweets with thanks to the Lionesses.