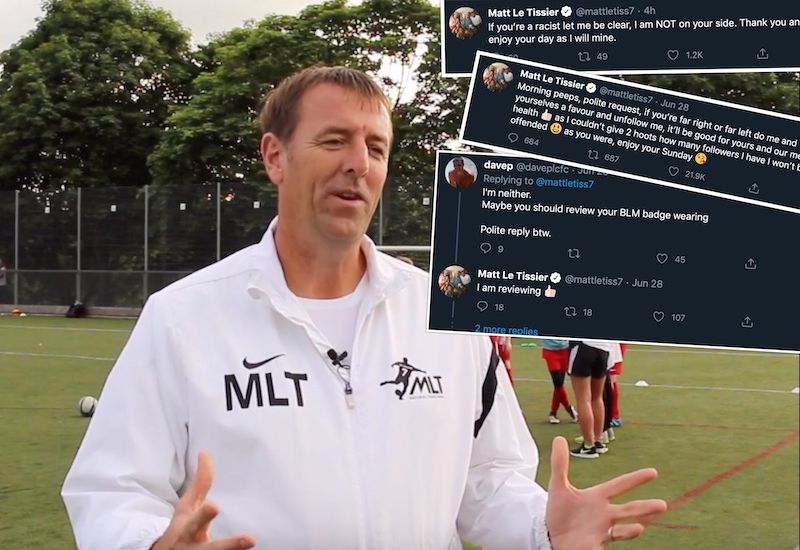 Guernsey's Matt Le Tissier, who was called out by some of his social media fans for wearing a Black Lives Matter badge on Sky Sports, has used his platform as a football pundit to stand against the organisation.

The former footballing star suggested to his half a million Twitter followers that his bosses had asked him to wear the badge, despite his differing opinions.

He said he doesn't support racism, but that his issues with the global organisation lie with its "promotion" of "defunding the police" and "ending capitalism".

Let me get this straight you promote defunding the police and ending capitalism?

The conversation began when Mr Le Tissier tweeted: "Morning peeps, polite request if you’re far right or far left do me and yourselves a favour and unfollow me. It’ll be good for yours and our mental health, as I couldn’t give two hoots how many followers I have I won’t be offended. As you were, enjoy your Sunday."

At this point, some of his followers question the pundit's public support of a 'far left' organisation, to which he responded: "That's a good point and one which I've made to my boss already. I'll let you guess the rest".

That’s a good point and one which I’ve made to my boss already. I’ll let you guess the rest

Meanwhile, Mr Le Tissier has been showing support for fellow former footballer, Karl Henry, who has also spoken out about BLM.

Has he got a valid point https://t.co/qNvnW1aHR1

Some of England's top football clubs have shown their support for the global anti-racism movement by kneeling before matches - in memory of George Floyd - and replacing names with 'Black Lives Matter' on the back of playing shirts.

However, the Premier League recently published a letter to distance itself from the BLM organisation, saying it "does not endorse any political organisation or movement, nor support any group that calls for violence or condones illegal activity".

Sky Sports has also shared a statement on the matter, clarifying its position on Black Lives Matter and the badges.

It read: "Our support is for the moral cause and campaign, that Black Lives Matter, rather than for any political organisation.

"We support the Premier League, its clubs and players who are making a powerful collective statement, that Black lives matter and there is no room for racism.

"Sky has made a number of commitments to tackle racial injustice and support anti-racism. As part of this, some of our pundits have chosen to wear Black Lives Matter badges on-air and others are choosing to support the anti-racism cause in many other ways."

Posted by Robert Williams on Jul 3rd, 2020
A voice of reason amidst all the hysteria.
To place a comment please login Login »

Funding Walking Football far from a walk in the park

Deloitte kicks off another season with GFA