A man whose family life has suffered as a result of being restricted to an Open Market house share will have his application for a Discretionary Residence Permit heard again, after his appeal against its refusal was successful.

The appellant, who Express has chosen not to name, first moved to Guernsey in 2000 and had some breaks in his residency before moving here permanently in 2009.

With family connections and close friends on the island, he told Guernsey's Court of Appeal that he considers the island his home. He had applied for a DRP in order to move out of his current accommodation - a multi-occupancy house share in a Part D property - as he wanted to provide more stable accommodation for his daughter.

After breaking up with his wife, he had moved back into a house share as he could not afford a property on Part A of the Open Market. However, residing in one room and having to share a bathroom and kitchen facilities was unsuitable for his daughter and his contact with her has stopped as a result.

His application for a DRP, which would have allowed him to rent a local market property, was rejected by the Deputy Population Management Administrator in February.

Advocate Nick Barnes, representing the appellant, said that in the circumstances it was not reasonable to expect the appellant to live in a HMO and that doing so represented a breach of his rights. 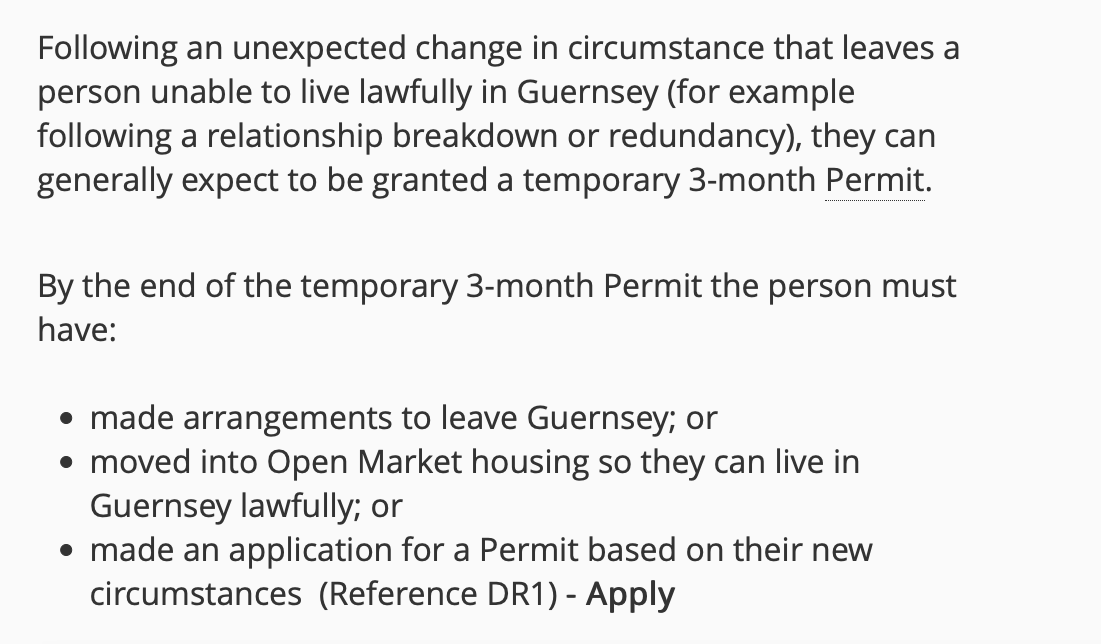 Pictured: An explanation of when people must either move back into the Open Market or make an out-of-policy application for continued rights to live in the Local Market following a change in personal circumstances.

He argued that the administrator had focused on the length of time that the appellant had been resident in the island in Open Market accommodation to the exclusion of other factors that should have been taken into account.

The Deputy Administrator told the Court that length of ordinary residency was not the sole factor in their decision. They contested that their decision email "set out in detail" the other factors they took into account in considering the application. Further, enquiries and meetings between all parties demonstrated that the administrator had made “genuine and real enquiry” into solutions for the appellant's situation.

The appellant had also been refused a Compassionate Licence in 2015 and had "not been left in any doubt" about the reasons why, having been sent a detailed 18-page document explaining the refusal.

Pictured: The factors that Population Management is obliged to consider when making a decision over a licence application. The Court ruled that the administrator had failed to properly take these matters into account.

The Deputy Bailiff Jessica Roland and the three sitting Jurats ruled that the absence of States policy and information on the local market housing stock invalidated the Deputy Administrator's decision.

"In the absence of policies on housing availability or of a proper consideration of relevant housing stock, the administrator cannot properly consider whether the restriction of the appellant to living in one form of housing is a legitimate aim or proportionate interference in the appellant’s private life," said Mrs Roland.

"Further when considering the appellant’s Article 8 rights, the considerations which the administrator must take into account are wider than the ability of the applicant to stay in his current accommodation and whether or not the appellant fits with the DRP policies.