Lost your friends at a festival? There is an app for that 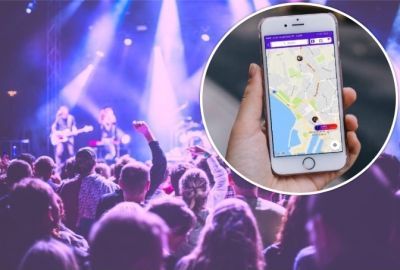 Lost your friends at a festival? There is an app for that

Jerseyman Brett Wickenden designed an app using augmented reality to help people pinpoint friends at any time, anywhere, to make sure no one loses touch in a crowd. 'Fynd' has now reached the finals of the inaugural Bailiwick Business Academy and will soon be facing group of potential investors.

No one expects to dream up the ‘next big thing’ at a festival. Many people might get drunken ‘big ideas’ - but that usually means dialling for a Domino’s pizza bigger than your face.

For Brett Wickenden, it was different. When he lost his friend, Andrew Kingsland, at a music fest, he realised that using augmented reality to help pinpoint anyone at anytime, anywhere could be the answer.

After mentioning the idea over a chance meeting – and a few beers – with future CEO Phil Beville at a racing event, the dream soon became a reality. ‘Fynd’ was born.
It’s an app that aims to “reinvent the calendar” by allowing users to create events on their phones and invite others with the app. Shortly before the ‘event’ begins – whether that’s meeting at a café or reuniting in a concert crowd – all parties’ phones hook up, allowing each member to ‘track’ the progress of others on their way.

If lost, a camera view can be enabled in which flags pop up on screen, allowing the user to find their friends – even in a dense group. Users can also message each other with an in-app service.“You don’t have that concern anymore that they’re not there. You just look at the app, and you can see they’re on their way,” Andrew explained.

Video: How does it work? This video explains all...

At present, the app is an international operation, with the team spread across Jersey, the UK (Brett, Andrew and intellectual property lawyer Lucia Caporuscio) and Delhi where it’s developed – but their dream is to embrace the “digital sandbox” of Jersey, making the first footprints towards the island’s own Silicone Valley.

Their key to success will be “getting out there” and securing as many downloads as possible. According to Phil, they’re hoping to seize the opportunity of the Six Nations and upcoming music festival season to get their name on local and global lips.

Fynd is currently only available on iOS, so getting it on Android is a “very important” next step. “We’re keen for it to be cross-platform, like WhatsApp,” Phil said.
But that’s not the only development – they’d also like to add advertising features, with the augmented reality function helping to point out stalls, pop-up shops and special offers at nearby establishments. It could also help businesses track footfall.

With support, the Fyndsters hope to grow their users into the hundreds of thousands over the next year. “We’re really excited about the future.”

On 5 March, Fynd will be one of the four finalists to go before the potential investors in the Bailiwick Business Academy, including Aaron Chatterley, Simon Perée and Zef Eisenberg.

Whether they invest or not is a personal choice - but they will decide on one winner who will receive mentoring, £10,000 of advertising with Bailiwick Express, £5,000 of marketing support from Orchid and six months free office space with Regus.

Over the next few days, Express will be profiling each of the finalists. Then, next Tuesday, you will be able have your say on our daily news e-mail on which one you think should win.

To learn more about the other Business Academy finalists, read the latest edition of Connect magazine here.

Looking ahead to 2019 with James Le Gallez

Do your life healthily, in style