A man has been sentenced to eight weeks in prison, after being caught with an illegal knife when he was stopped for drink driving.

David Hawley, 53, was stopped on his motorbike just outside his home at 18:15 on 25 April, after Guernsey Police received multiple reports about his driving.

He completed a roadside breath test, which showed he was over the limit, and was arrested.

When the officers searched him, they came across an illegal folding and locking knife in his pocket, with a three inch blade. He was taken to the station for questioning.

The defendant was asked to complete a blood test, which confirmed he was more than twice the legal driving limit. He told officers he had drunk two glasses of wine at lunchtime, but that he hadn't eaten and had just got back from the shop when he was arrested.

When asked about the knife, he explained that he had originally been carrying it because of his previous employment as a boat engineer, but hadn't been working for five months so had been using it for everyday tasks. 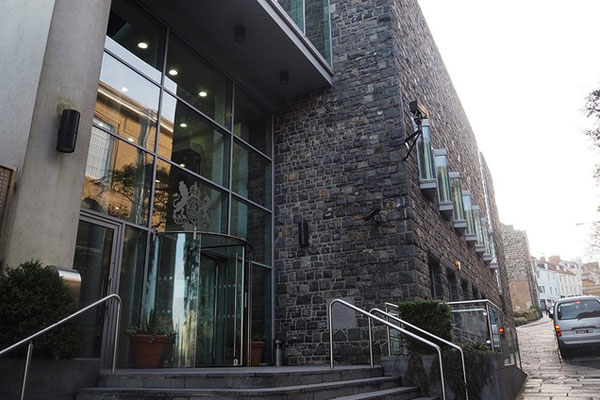 Pictured: The defendant was sentenced in the Magistrate's Court.

In Hawley's mitigation, Advocate David Domaille said his client was under "no illusions as to the probable outcome" of his court appearance.

This was his fourth drink driving offence, although the last was back in 2005.

Advocate Domaille said the defendant was "in a state of despair at the time" of the incident and explained to the court how he "doesn't think of the consequences of his own actions" when he drinks.

He told Judge Gary Perry that Hawley "comes from an era when everybody had a penknife in their pocket" and that he had carried the blade for "many years".

However, Judge Perry was not impressed to see the defendant back in court, taking his criminal record into account.

"You clearly haven't taken the opportunity to change your habits," he told Hawley.

In addition to his eight weeks in prison, the defendant will have to serve a six year driving ban for his actions.

Pictured top: The defendant has been sentenced to eight weeks in prison.