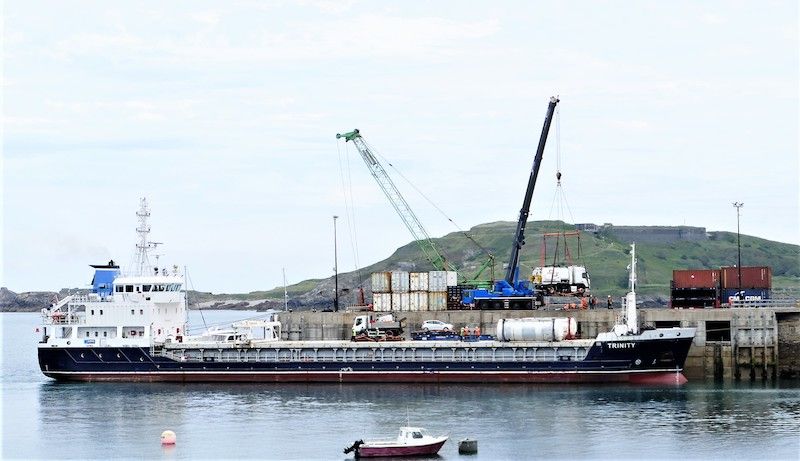 There have been calls for an inquiry in Alderney after the island's new £800k harbour crane experienced ongoing technical issues, leading to low food supplies and the emergency order of a temporary replacement.

A new harbour crane was long-awaited by Alderney residents and provided a lockdown lift for islanders when delivered at the end of January.

The Sennebogen crane was fitted and commissioned in February, but run into issues last week, meaning that cargo deliveries could not be brought ashore.

Pictured: Food supplies have been scarce in recent days.

The island's States announced that Alderney’s new harbour crane was back in service following a "remedial fix" on Thursday.

However the new crane - which suffered a defect that the States say is covered by warranty - suffered further "electrical issues" within a day of that fix.

The Alderney States then confirmed: "It has been necessary, with the assistance of Bruno Kay-Mouat and Alderney Shipping, to source a temporary crane to cover cargo deliveries to the island."

I think an inquiry should be made, why a new crane has electrical faults, that are so bad an engineer, cleared it to be serviceable, and it’s broken again, and why have the States of Alderney , sold the old crane for peanuts. Without a tender process.

Pictured: Questions are being asked about the harbour crane situation, just weeks after the farcical pontoon crisis was highlighted by politicians and media.

It means there are currently three cranes at the harbour, only one of which works.

“We would like to take this opportunity to apologise for any disruptions suffered by local businesses during these unforeseen circumstances,” a Harbour spokesman said.

Pictured top: The temporary crane captured in action on Monday by David Nash.