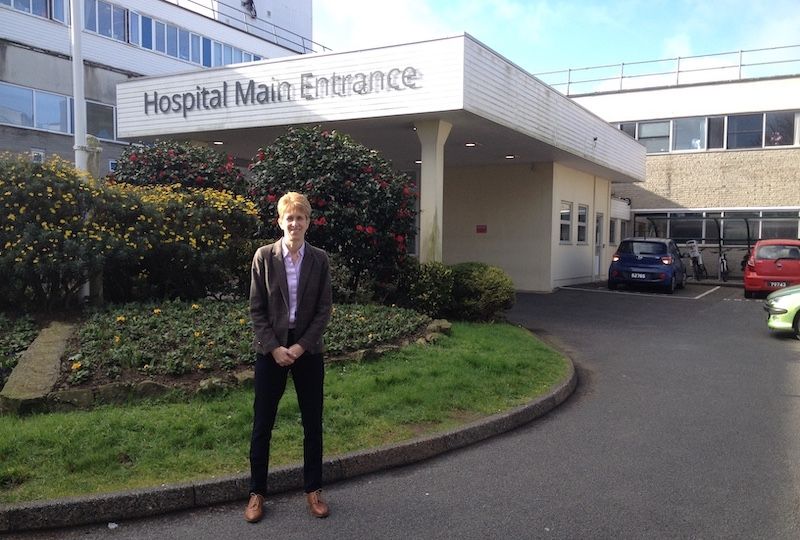 'Tangible action' must be taken as soon as possible regarding the nurses pay dispute, the President of Health & Social Care has said in an open letter to Policy & Resources.

Deputy Heidi Soulsby urged the Committee which holds the States' purse strings to expedite the ongoing pay negotiations and give a clear commitment to addressing the 'pay disparity'.

This comes as nurses in Guernsey are preparing to march in protest at their pay and conditions tomorrow. They will start at Salerie Corner and walk through Town to gather support for their cause.  They've already been drumming up support by asking motorists at various locations to honk their horns in support.

Previously, nursing convenor for the Royal College of Nursing - a nurse's union - Kenny Lloyd told Express they wanted nurse's pay to be improved not only because of the clear pay disparity, but also to make the island's health care system more robust, as it would improve staff recruitment and retention.

Negotiations have been ongoing for some time.

Deputy Soulsby said in her letter, printed in full below, that she was now becoming concerned over the "very real impact that it is having on the morale of the workforce, and the broader risks that this brings for the continuity of health care provision".

"Staff terms and conditions need to recognise, and reflect, the technical and complex nature of modern nursing and need to be competitive, both compared to that offered by other jurisdictions and for similarly-skilled positions within the public sector," Deputy Soulsby wrote.

"The challenge is that the health care system does not have the luxury of time. We are dealing with the very real consequences of an ageing demographic, and the resultant sustained pressure on the health and care services.

"[...] it is very clear that [nurse's] patience is rapidly running out, and options are now being considered by a number of them which may include insdustrial action. My Committee intends neither to condone, nor to condemn, the taking of such action. I will however highlight that action has the potential to be incredibly damaging and costly should it take place."

The full letter is included below: 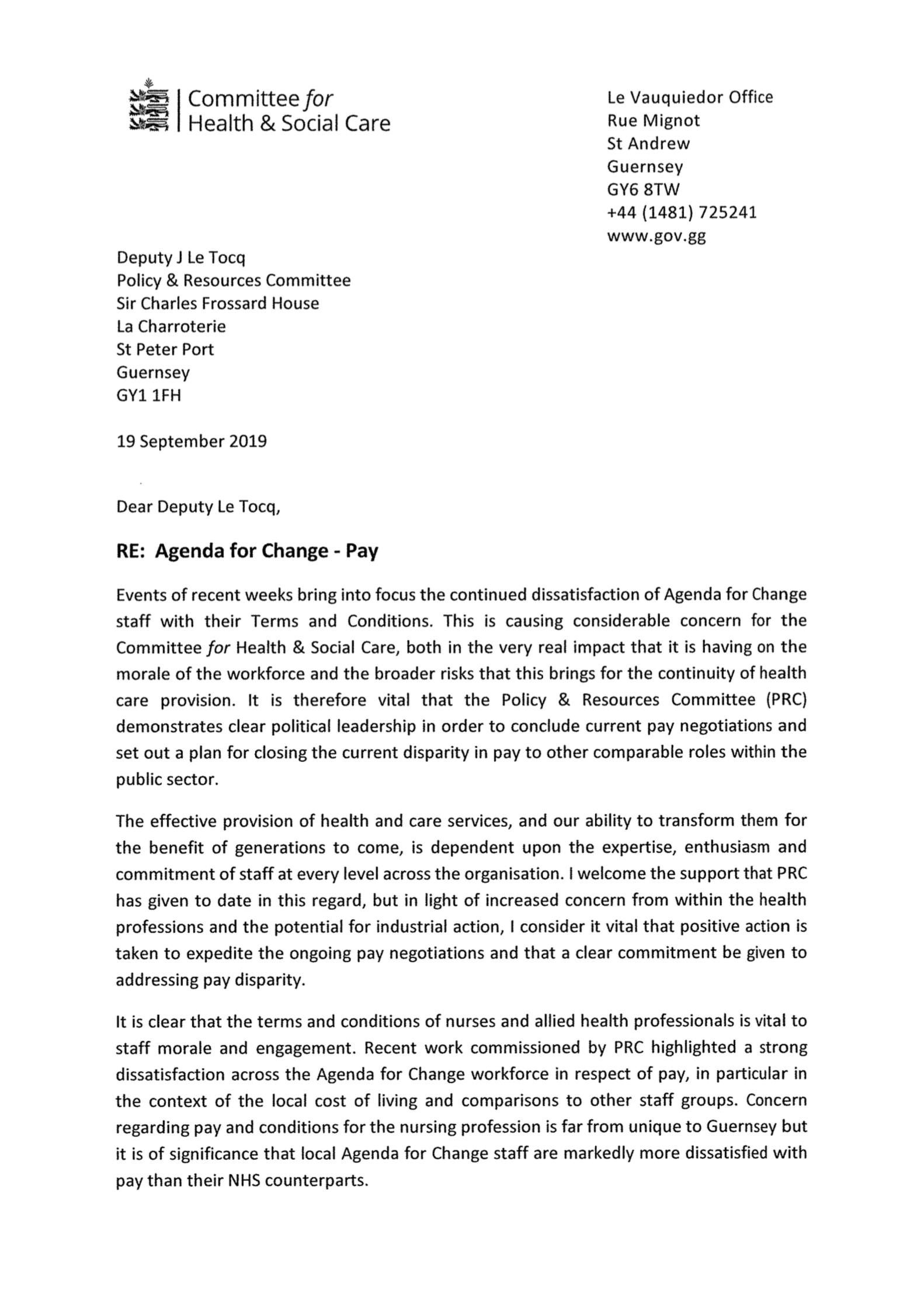 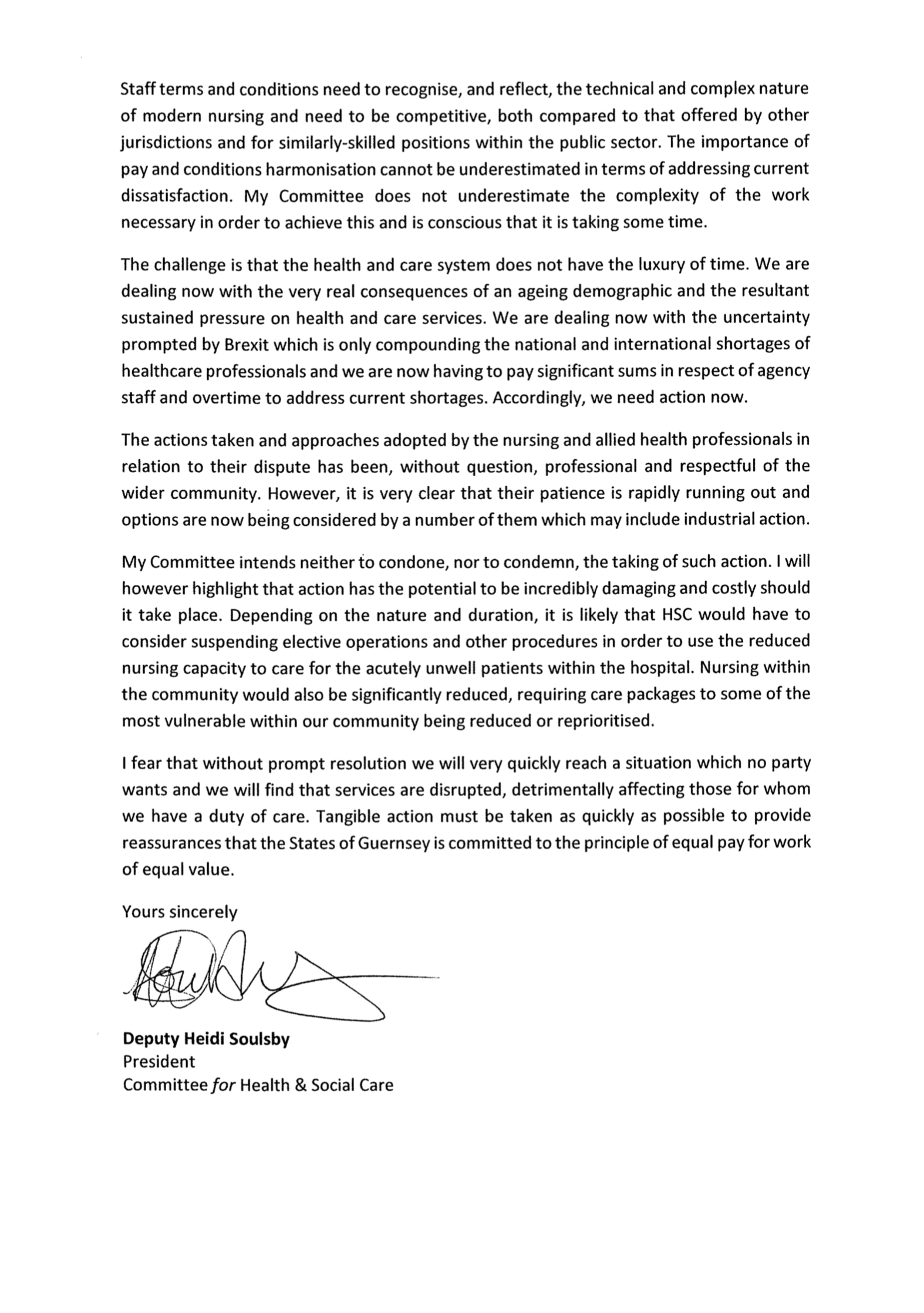 "Tell us what you think"