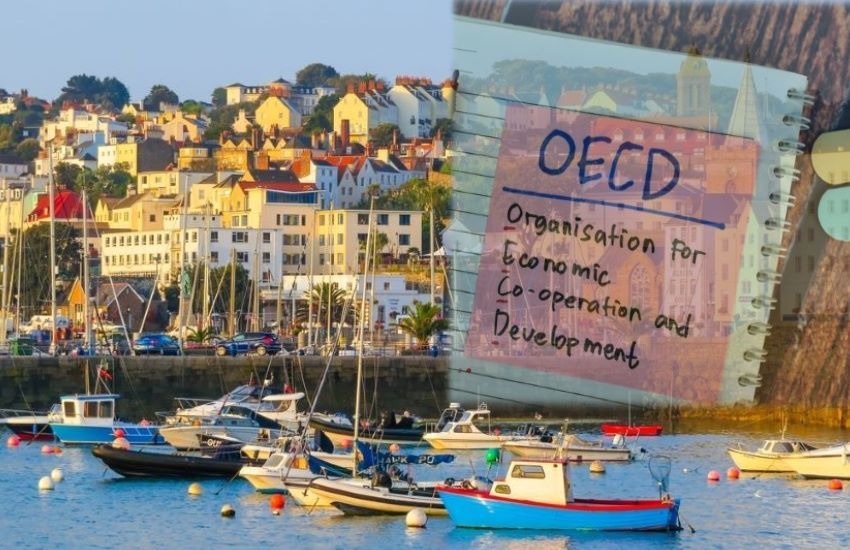 A report comparing life in more than 30 developed nations shows that people in Guernsey generally enjoy high standards of living but are also becoming less satisfied with life.

Guernsey scores highly on a range of indicators such as household income, life expectancy, employment, environment and voter turnout.

But there are consistent falls in the proportion of islanders reporting that they are satisfied with their lives. Life satisfaction fell between 2018 and 2020 and again between 2020 and 2021.

The annual report provides information on the progress Guernsey is making towards an aim agreed in 2016 to be "among the happiest and healthiest places in the world, where everyone has equal opportunity to achieve their potential" and to provide "a safe and inclusive community, which nurtures its unique heritage and environment and is underpinned by a diverse and successful economy".

Pictured: On average, household disposable income in Guernsey is very high, but in the pandemic it has fallen in real terms.

Average unemployment was 50% greater in 2020 than in 2019. But employment in the Bailiwick still scores above the international average and remains generally stable when compared to fluctuations experienced in many other jurisdictions during the pandemic.

The report stated: “It is likely that the travel restrictions and self-isolation requirements had a large impact on employment throughout 2020.”

Pictured: Unemployment in Guernsey increased as the pandemic hit the economy but it has since fallen considerably and internationally the island continues to enjoy high levels of employment.

Up to 2018, 76% of respondents in the Bailiwick believed they enjoyed good or very good health.

Each of these figures was better than the average results reported among even the most developed jurisdictions in the world. 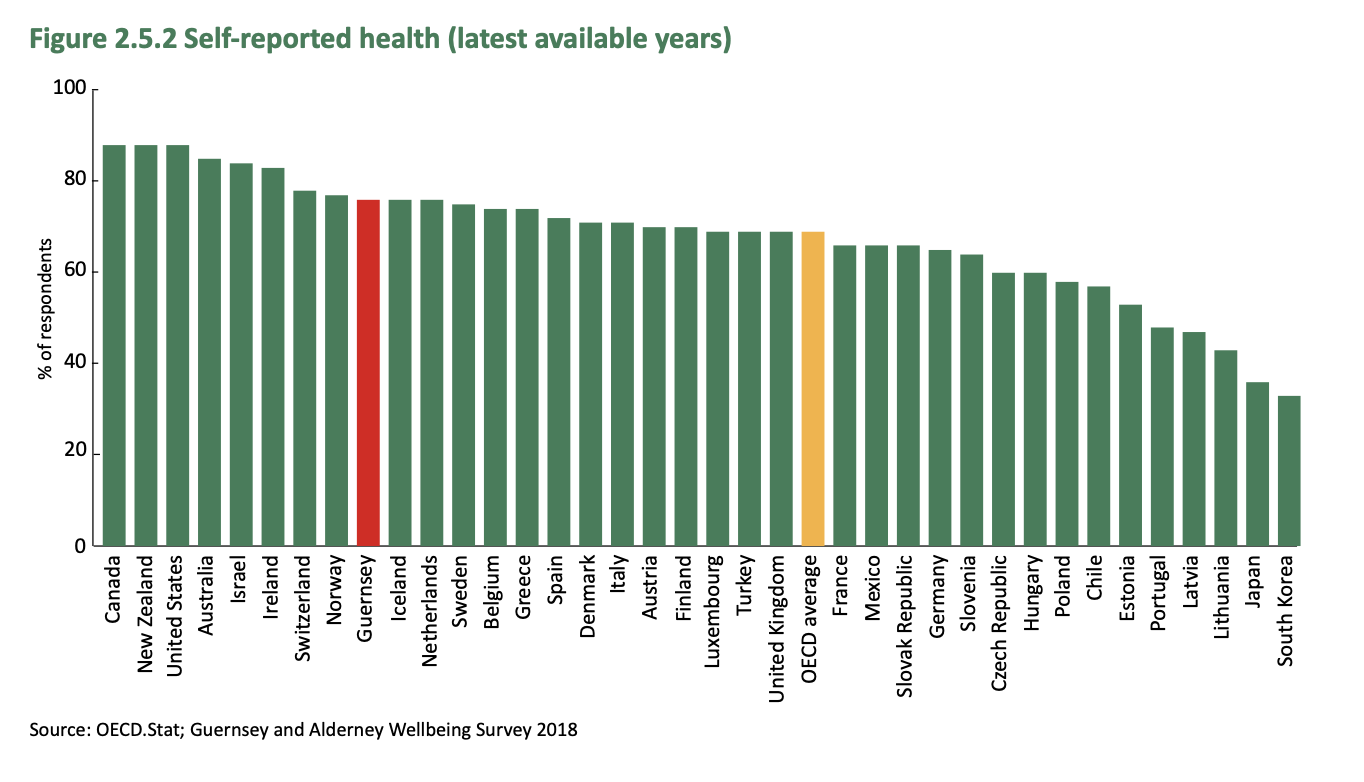 Pictured: Guernsey is in the top half of OECD jurisdictions for citizens reporting good perceptions of their own health.

However, Guernsey performs less well for housing expenditure, which includes the cost of property, household bills and associated general maintenance.

The report stated: “Guernsey’s housing costs are high compared with the OECD countries, ranking joint last, meaning that households in Guernsey have to spend relatively more of their budget on housing."

On average, households in the Bailiwick spend 27% of their income on housing. This is on a par with housing costs in the UK and New Zealand and more expensive than in all the other jurisdictions measured. The figure has also risen since 2018. 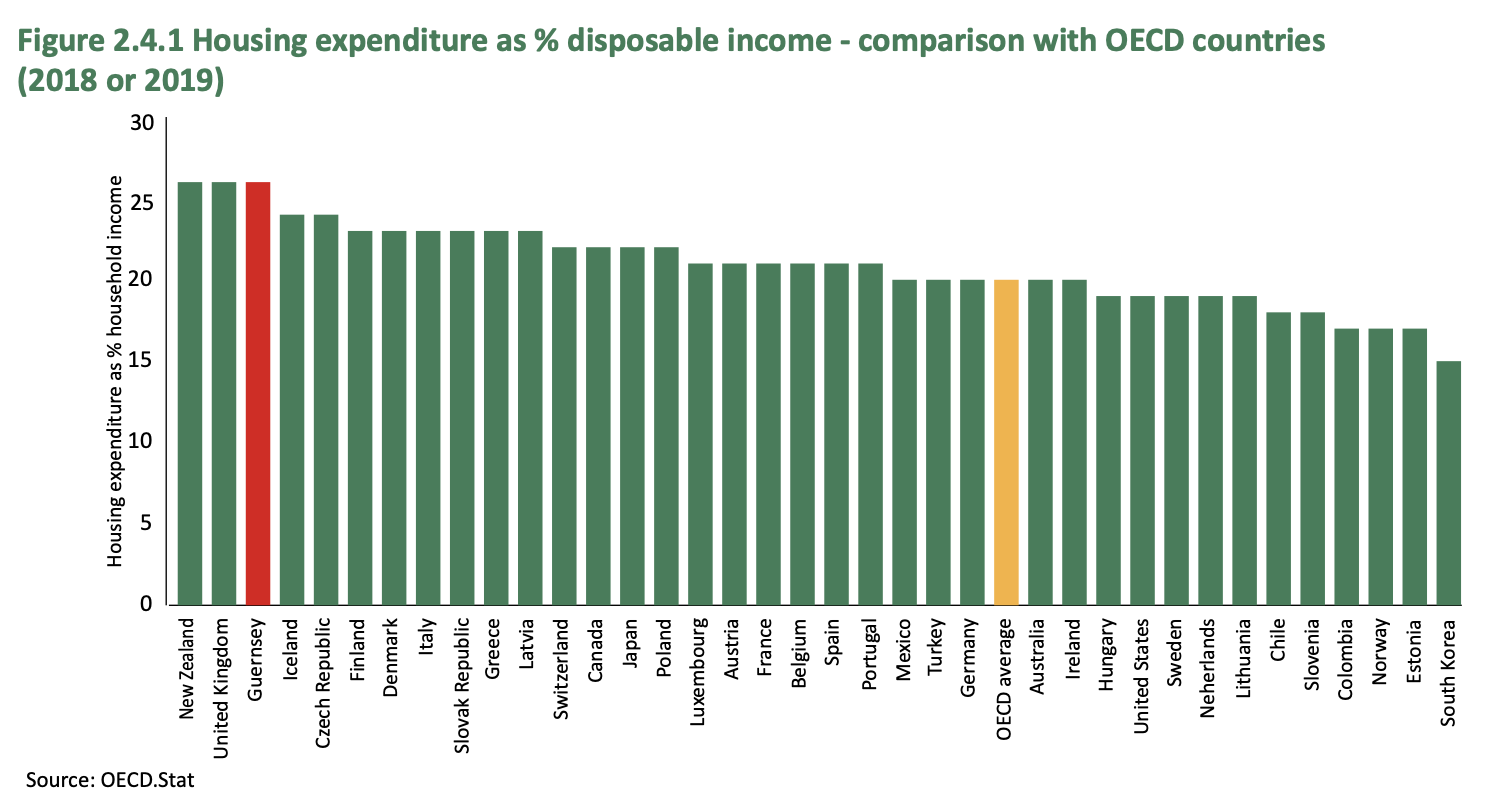 Pictured: Guernsey ranks highly for household income but housing costs contribute to the island being one of the most expensive places to live.

Guernsey scores very highly for personal safety. This is due to low rates of the most serious crimes. Some relevant measures, such as perceptions of safety when walking home at night, are not collected in the report.

However, although Guernsey is often perceived to have a strong sense of community, the report found that people in Guernsey feel less confident than many people elsewhere that they have other people to rely on when they encounter problems.

The States said the report has limitations but remains instructive.

"Information is incomplete in some areas of this edition," they said. "Work is underway to source the missing data but, in the pursuit of openness and transparency, the report is being published with the gaps highlighted.

“It is hoped that this report can still usefully inform the public, States’ members and any proposed changes to the policy priorities or work streams of the States.

"Details regarding which data are not available or not comparable and actions that are being taken in order to fill the data gaps are included in the relevant sections."