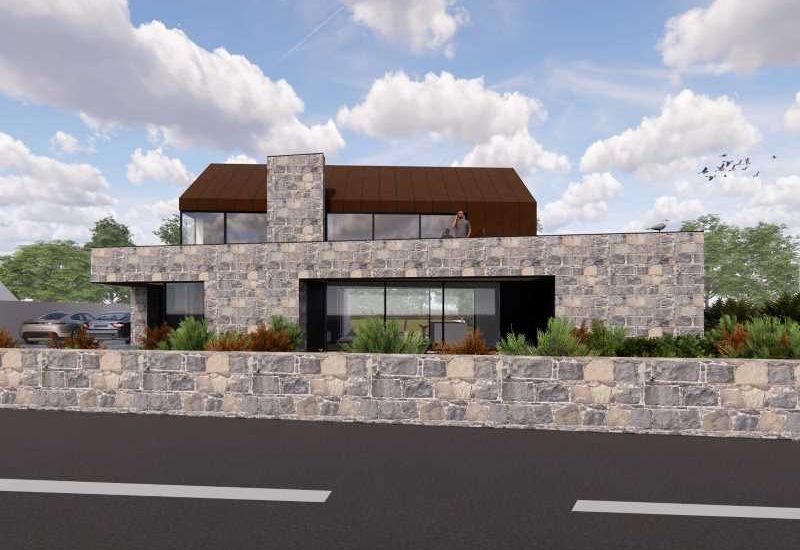 A frustrating experience with the Development and Planning Authority has left the owners of a derelict cottage with planning permission, in limbo.

The property at Rocquaine, which was known as Issue Cottage, was recommended for planning permission in 2020, but the political members of the DPA went against their officers advice and said no.

A planning appeal, held in November last year, went in favour of the developers, and agreed with the planning officers in granting permission for the existing bungalow to be demolished and replaced with a modern, two storey property.

The architects designs were drawn up by David De La Mare and his team at DLM Architects. He understands that the owners of the property are now looking to sell the site, with planning permission, rather than redevelop their own dream home and live in it themselves.

The initial planning application was lodged in 2020, and in October that year the planning officers recommended it be granted with conditions. Those conditions included changes to the proposed steel and zinc cladding which was originally to be used on the external of the new building.

Mr De La Mare said the plans all fitted in with the requirements of the Island Development Plan and the designs had gone further than necessary to minimise impact on the surrounding area. The existing dwelling is not listed, and has been extensively extended previously. The new build would be set further back from the road, so less intrusive to the neighbours, and additional drainage solutions had been sought to minimise any risk of flooding.

Mr De La Mare said concerns which had been raised about the plans, including the risk of flooding and the replacement of traditional cottage, with a new build property, were not within the remit of the IDP which the DPA must base its decisions on. Therefore he was not surprised when the planning officers recommended approval, and he was disappointed when the political members voted against it.

“Unfortunately it set a potentially damaging precedent, that a residential application recommended by the department for approval and demonstrating compliance with the IDP, can be delayed and subsequently refused by the deputies that sit on the committee based on a subjective viewpoint.

“My understanding is their role is to assess applications in accordance with the IDP - not to base their decisions on personal opinions. This development met the relevant planning policy so it was a very frustrating process, and what's a real shame, is that despite obtaining the approval, due to the delays and uncertainty of the process, our client has made alternative arrangements. It's concerning that the committee are influencing small scale homeowner applications, and although there is an appeal process to challenge wrongful decisions, the risk of delay and additional costs involved discourages development of our redundant housing stock."

Now that planning approval has been given, work has to start within the next three years. Work could start immediately but Mr De La Mare said the owners have found it to be such a frustrating process that they've had to look elsewhere for development opportunities.

“Following the unexpected refusal by the committee, the only choice was to make a planning appeal, which was costly to the homeowner, and to the States. The tribunal is made up of three independent professionals who review all the background information prepared by both sides and question all parties at a formal public hearing and site meeting. Within their summary, the tribunal highlighted that they had struggled to establish the committees reasons for refusal, and on clarification, concluded they didn't agree with them, and that the proposal met the criteria of the IDP and be allowed."

Mr De La Mare said the land owner still wants to invest in building their own property but that this process has taken too long so they've decided to move on and look into buying other properties and selling the land at Rocquaine.

Mr De La Mare said the Rocquaine property is still in need of redevelopment regardless of if happens through the current owners or a future buyer. The local market cottage is classed as derelict, and Mr De La Mare said it will further deteriorate if it is left to sit there in disrepair.

“Like many across the island, the existing building is derelict, it's not eligible for a mortgage, and requires significant cost to make habitable.  Add in a complex and lengthy planning process and there will simply not be the  appetite to develop these buildings and they will sit vacant to deteriorate further."

Some of the concerns raised with the redevelopment plans included objections over the scale, form and design of the replacement dwelling, the proposed industrial appearance of the new build, because of the cladding intended to be used, and the lack of character of the historic fisherman's cottages along the coast road.

The proposal was also described as increasing the risk of flooding on the site, the new boundary wall was described as effecting a loss of light, overshadowing and loss of views for neighbouring properties while the proposed flat roof was likely to impact the neighbour's privacy.

Mr De La Mare said they are all valid concerns, and efforts were made to address some of them. He said that as the existing cottage had already been extended and had more flat roof space than was proposed under the new development plans, he found some of the objections frustrating.

The new development would have been further back from the road than the current cottage, so would have been more private and afforded more privacy for the neighbours, the cladding had been changed to reflect the feedback given and the drainage had been designed to run off and enter the water table at the rear of the property's garden.

“The site held a previous approval to demolish and replace the existing building, but our client appointed us to design a building that met their specific needs.  A sustainable, efficient and robust home, that maximised the site aspect, and offered them lifetime enjoyment and accessibility.

"People have the right to build their home to meet their needs and personal aspirations, and this is a very important and successful part of the flexibility that the IDP offers.  It would be a real shame to go backwards and undo the progress the IDP has made," said Mr De La Mare.

"Of course we must respect tradition and heritage, but we must also challenge convention and embrace the advancement in building technology and how we live."

Pictured: The proposed Halekaluni development at Rocquaine. The development which is being advertised on Facebook does not feature the designs which Mr De La Mare achieved planning permission for.