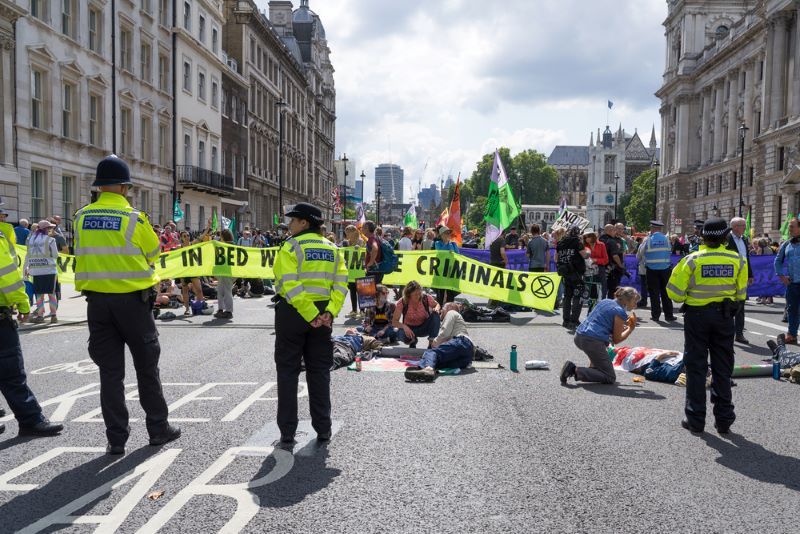 A Guernseyman is crowdfunding for his wife and eight other Insulate Britain campaigners who were imprisoned after they repeatedly blocked roads in the UK.

Andrew Smith's wife, Emma Smart, 44, who is a scientist, was among the group jailed for four months for breaching an injunction banning them from protesting on highways.

She is reportedly on the 12th day of a hunger strike in HMP Bronzefield, a prison for women on the outskirts of Ashford in Surrey.

Insulate Britain is allied to the international movement Extinction Rebellion, which refers to itself as a non-violent civil disobedience movement. Insulate Britain campaigns to see all homes in the UK insulated within a decade. It has highlighted its cause partly by protesting in roads, leading to significant disruption to motorists, including on the M25, the UK's busiest motorway.

Mr Smith says he usually keeps a low profile during protests with Insulate Britain and Extinction Rebellion but felt compelled to speak out publicly following his wife’s jailing.

In a video posted to social media earlier this month, Mr Smith called on other climate crisis campaigners to stand up for their cause.

Pictured: Andrew Smith spoke at an Insulate Britain event to draw attention to his wife's efforts to highlight the need for urgent action on climate change.

As well as running the Centrefold Gallery and working as an Arts Development Officer, he was the founding member of the Readerswives Collective, a group launched to encourage established and upcoming creatives to work together.

The couple left Guernsey in 2012 to travel around the world. They documented the journey on their blog site. They have used their blog to address criticism of their carbon footprint and for travelling around the world in a diesel Toyota Hilux Surf vehicle.

With his wife now behind bars until the New Year, Mr Smith is using social media to highlight her plight and has encouraged supporters to email her.

Pictured: Guernseyman Andrew Smith and his wife, Emma Smart, who have made national news headlines after she was imprisoned for her role in climate change protests.

In addition to their prison terms, the nine jailed campaigners were ordered to pay their court costs, which were originally set at £91,000 but have since been reduced to £5,000 each.

Mr Smith says they need assistance to pay their living costs while they are unable to work, including rent and mortgage payments and other essential bills. He also hopes that money raised through the crowdfunding campaign will allow relatives to visit the campaigners in prison.

Actor Ralf Little is among those donating to the cause after publicly supporting the jailed protestors.

Tell that to Nelson Mandela. Or Oskar Schindler. Or Martin Luther King. Or Gandhi. I could go on…