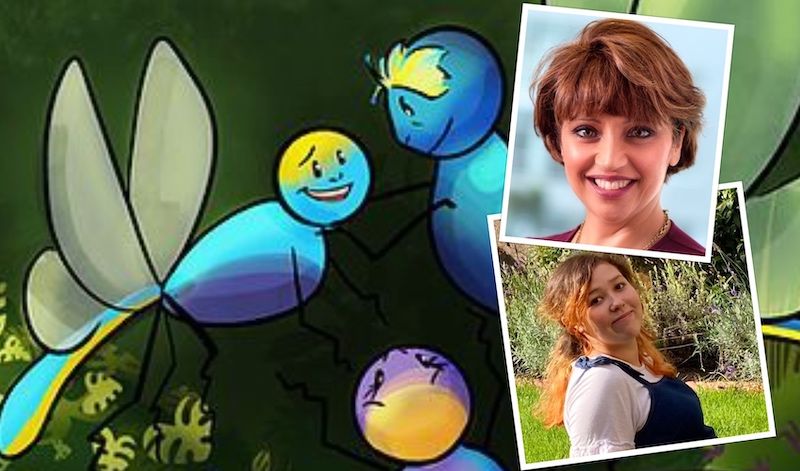 A 21-year-old arts student in Jersey has teamed up with a local author to illustrate the ‘Unlikely Friendship’ between a dragonfly and a retired professor in a children’s book.

Kiera Melville, who moved to Jersey with her family six years ago, brought the characters imagined by Debbie Guillou to life in ‘An Unlikely Friendship’, which was released just before Christmas.

The book - which is available on Amazon in paperback and Kindle version - tells the story of Palmer, a young dragonfly who is swept away from his home by a storm and finds himself in a strange country, with no idea of where he is or how to find his way back to his family. 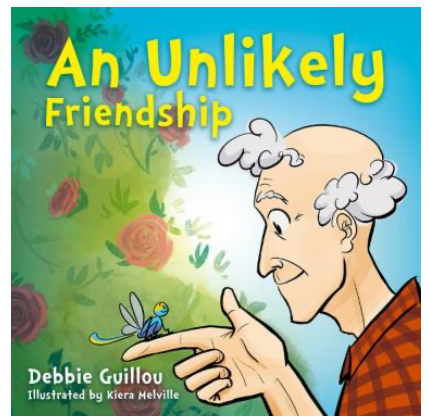 Pictured: The book tells the story of Palmer the dragonfly and Sebastian a retired entomologist.

Palmer luckily meets Sebastian, a retired entomologist whose love for animals and insects makes him the perfect person to help Palmer solve the mistery of his birthplace.

“Since I wrote it I realised how poignant it could be,” Debbie said. “There is the dragonfly dragged out of its home by a storm, but he also helped an elderly gentleman who is all by himself find value in his life.

“It is poignant from a number of angles, it’s quite sweet.” 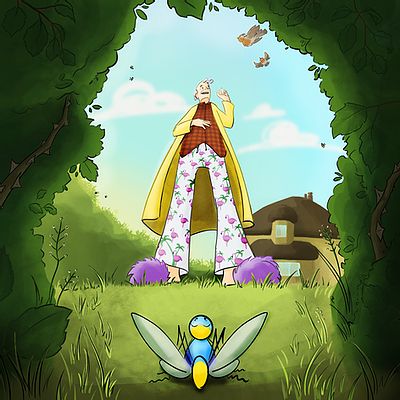 Written in rhyme, ‘An Unlikely Friendship’ is aimed at children between the age of five and nine and makes for “a perfect bedtime story” for even younger children, Debbie said.

The Guernsey author explained the character of Palmer was inspired by 12-year-old Louis Ingrouille in 2017.

“I was on holiday with friends in Tenerife, hence why it is involved in the book,” Debbie said. “My friends have a little boy who wanted to have something to keep occupied. 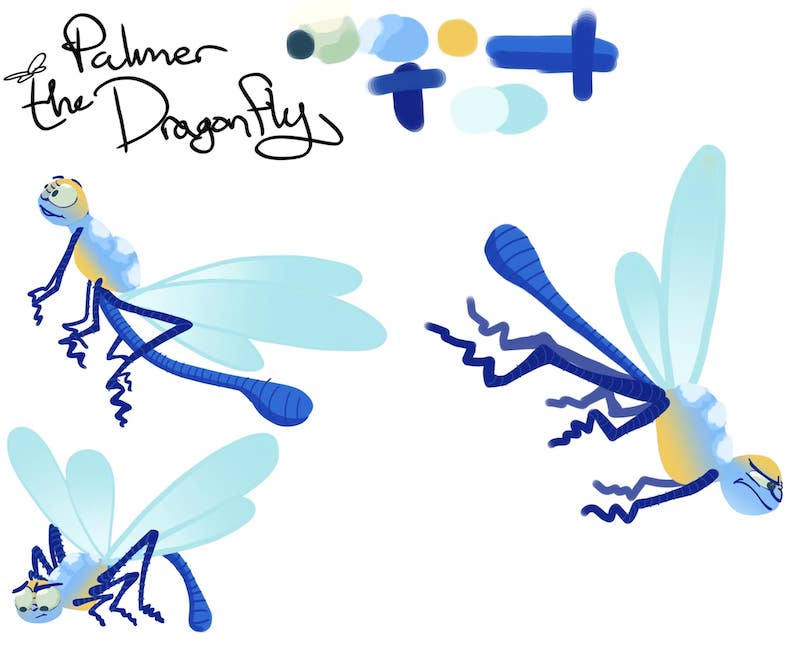 Pictured: An early concept for Palmer the dragonfly.

While Louis soon added sci-fi elements to his story - “He is really into Star Wars” Debbie said - Debbie sticked the original idea and wrote the whole story in 12 hours, while flying back to Guernsey.

“It just came to me, it was really inspirational,” she said.

With Palmer’s story written, Debbie went looking for someone to bring it to life with illustrations. She was introduced to Kiera through her dad, Douglas Melville, with whom she works at the Channel Islands Financial Ombudsman.

“It was actually out of the blue,” Kierra said. “I was on vacation and my dad said ‘can you draw a dragonfly?’ and I did. It was the most interesting and I suppose painless job interview I’ve had.” 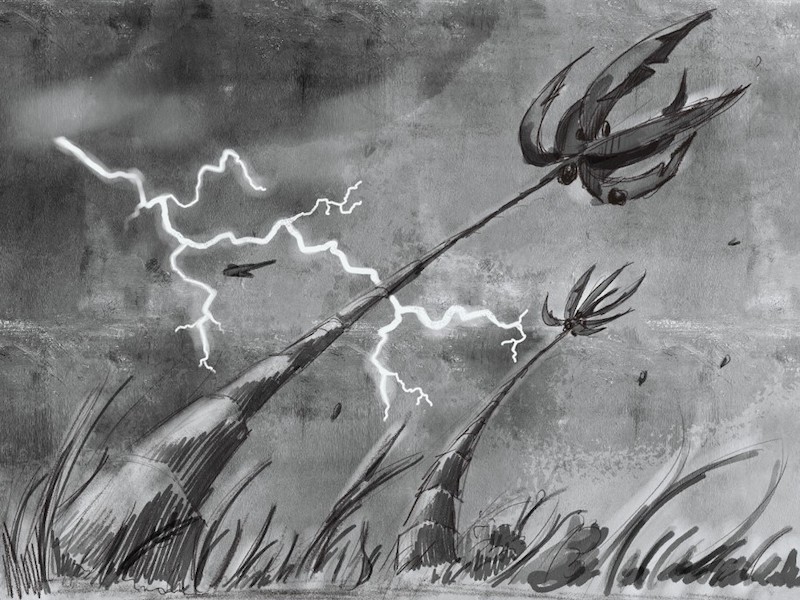 Pictured: The book starts with Palmer being swept away from home by a storm.

“She has done such an amazing work, it is such a fabulous job,” Debbie said.

While the pair has never met due to the pandemic, they have enjoyed working together.

“It’s been such a pleasure working with Kiera to bring the story of Palmer the dragonfly to life,” the author said. “She immediately captured the cheekiness and bravery of the little character as well as the kindness and eccentricity of Palmer’s unlikely friend, Sebastian.

"It’s been a really fun project and I hope Kiera and I will work on some more collaborations in the future.” 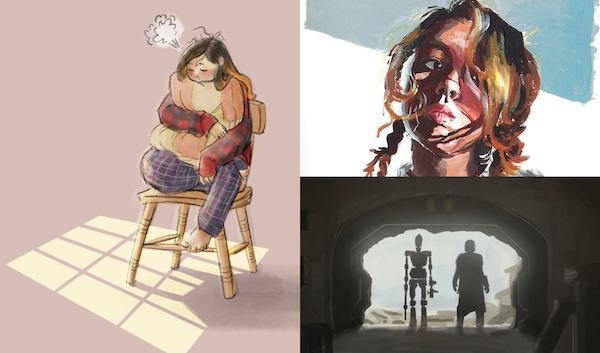 Pictured: Kiera has been drawing since a young age and is currently studying animation in Bournemouth.

As a young arts student at Bournemouth University and having drawn since she was very little, Kiera relished the opportunity to work on her first commercial project, even though it meant she had to produce all the illustrations within a month, on top of her university work.

“The experience has been really helpful I got to learn a lot about illustration,” Kiera said.

“It was quite a free space to imagine and come up with the concept design. Debbie did have some pointers which are mainly within the text of the book.

“It was really fulfilling, I really loved it and I am so grateful to Debbie for the opportunity.”

The pair enjoyed working together so much that they are planning to collaborate again in the future, possibly on a new story featuring the dragonfly and the professor.

“I have been thinking about a follow up with Palmer and Sebastian meeting over Christmas time, but dragonfly do not live very long so the continuity is going to be a little difficult,” Debbie said.

“The work Kiera did makes the book so special, I have to make sure that she is free.”

In the meantime, Debbie is also working on other stories. “I do write a lot in my spare time. I find it therapeutic,” she said.

Meanwhile, Kiera has another project lined up.

“I have another book in the works with a Jersey author but I cannot say anything more than that.”

‘What would Jackie Weaver do?’