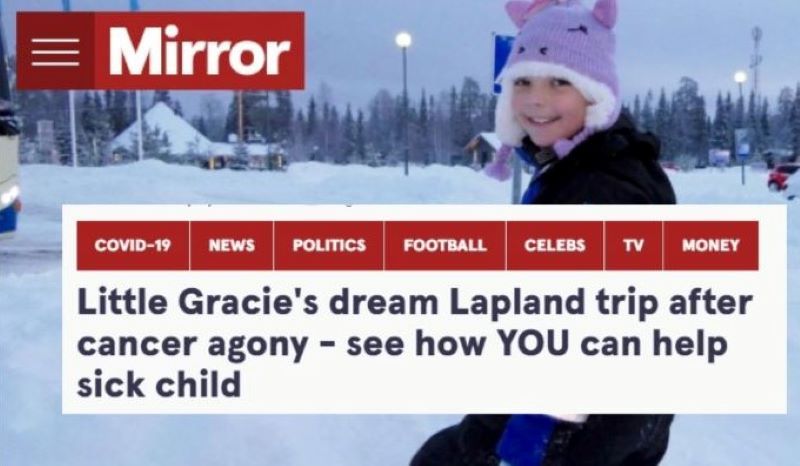 A Guernsey family’s dream trip to Lapland has been featured in a national newspaper’s Christmas campaign to support the work of Make-A-Wish UK, a charity which helps seriously ill children enjoy memorable experiences.

Gracie Whitwam, her little brother Oliver and their parents Stephi and Martin met Father Christmas, his elves and reindeer during a magical trip to the North Pole two years ago. Gracie had twice endured treatment for a childhood cancer. The Daily Mirror’s recent feature on the charity described the Lapland trip as a way of “helping to erase the traumatic memories of months of dreadful cancer treatment with happier ones to cherish forever”. 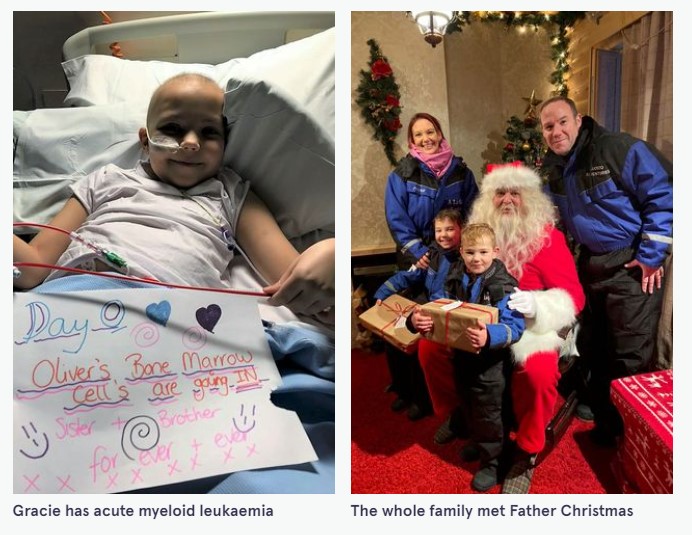 Pictured: The Daily Mirror is supporting the work of the Make-A-Wish-UK Foundation, which enabled the Whitwam family to spend precious time together on daughter Gracie’s dream trip to Lapland. Images are from the Daily Mirror article, which can be read here: mirror.co.uk

Gracie was diagnosed with acute myeloid leukaemia when she was just eight years old after initially complaining of a headache on Boxing Day in 2017. Treatment in Southampton included four rounds of chemotherapy, which was successful. But during celebrations for her ninth birthday, Gracie started to feel unwell again and had to return to Southampton for further treatment, including a bone marrow transplant.

Oliver, then aged only five, was a match and wanted to help save his sister's life. Stephi told the Foundation and the Daily Mirror that she had reservations about putting her son through such serious surgery. “We were honest with him and always gave him the choice, and he never once said no,” said Stephi.

Pictured: At any one time, the number of children in the UK with serious illness is equivalent to the whole of Guernsey’s population.

The Daily Mirror has launched its Christmas Appeal with the aim of raising funds for Make-A-Wish UK to allow the charity to help even more “seriously ill young people make their dreams come true”.

At any one time, around 63,000 children in the UK are seriously ill – the equivalent of the whole population of Guernsey. Many of those children will spend Christmas in hospital and the Daily Mirror wants to give them “a Christmas that they will always remember”.

More than 500 seriously ill children are currently listed as ‘waiting for a wish’. Their wishes range from hoping for a tennis racket to travelling by cable car through mountains.

Some children have similar wishes to Guernsey’s Gracie, including to meet Santa, go to Disneyland Paris or visit other exciting locations across the world.

Pictured: Gracie’s wish story features on the Make-A-Wish UK website, as well as in the Daily Mirror’s Christmas campaign.

Gracie still has regular check-ups with specialists, which will continue until she is 18, but her mum told Express that she is "thriving and doing well".

Stephi said they wanted to raise awareness of the charity which had funded their Lapland trip, saying "we would be happy to help in anyway to support this wonderful charity."

Pictured: The Make-A-Wish UK website features Gracie Whitwam and her family as an example of how the charity can make a dream holiday come true.

Her mum also told Make-A-Wish UK that Gracie’s school friends “have all been amazing“ and that she received so many messages and calls from concerned relatives and friends that they had to keep a blog to deal with the level of interest and support.

For much of her treatment, Gracie was isolated at Southampton Hospital with her mum but no other family or friends. Her mum said that this experience made Gracie “an inspiration to friends and family who have been coping with isolation” during the covid-19 pandemic.

There is more information about Gracie Whitwam and her family’s trip to Lapland and how other children can benefit from having their own wishes granted at make-a-wish.org.uk

Guernseywoman's son rings bell at the end of his chemotherapy