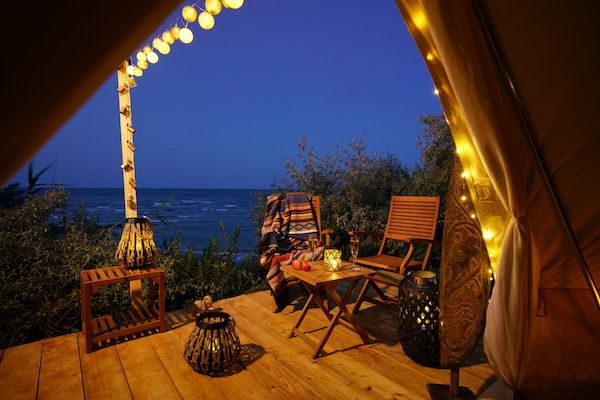 A planning application for a glamping site in St Peter's has been approved with the landowner saying he is "ecstatic" but "exhausted" after a process which has taken more than a year.

Danny Barnes was told yesterday that he can create six glamping units, and a swimming pool, on the land he owns near La Houguette School, despite a number of objections being lodged against the plans from nearby residents and the Douzaine.

Mr Barnes said he was "just ecstatic" and he was "really really relieved it is all over" after a "very long process, over a year."

The application was initially for ten units but Mr Barnes downsized his plans after concerns were raised about a number of issues including noise, traffic and drainage.

Speaking to Express soon after he was told he can now go ahead and start working on developing six units, he said: "I'm exhausted, ecstatic, but exhausted.

Acknowledging the concerns which were raised, Mr Barnes commented: "we just wanted it to go through quietly and let the experts deal with it. I've had so much support for it, and it's a real good news story, and good for Guernsey's economy right now."

"We hope to be open by the next summer season (2019), as we're further behind schedule than hoped, but now we can just get on with it."

The Development & Planning Authority approved a change of use under the Planning Application FULL/2017/0947 which means the land; at La Jaoniere Es Rocques, Rue Des Paysans Au Val, St. Pierre Du Bois, can be removed from the register of agriculture land and rezoned for use as a glamping site with six units, a swimming pool and a services block along with associated landscaping and car parking.

During an Open Planning Meeting, held at Beau Sejour on Wednesday 21 February, the Committee "gave very careful consideration to the submitted application and to all the representations made, including those made orally at the Open Planning Meeting.  The Committee then visited the application site and its surroundings, including the network of roads surrounding the site, and also considered longer views of the site including from the coast."

In a statement, the DPA said: "Having fully considered the matter in the light of all material planning considerations, the Committee concluded by majority that the likely impact of the proposed development would be acceptable for the reasons set out in the published planning report on the application and that the proposal complied with the relevant policies of the Island Development Plan."

Conditions were applied to the planning permission though, to deal with "sewage disposal from the site, to ensure the adjoining public road is not blocked by tankers, the hours of operation of the proposed swimming pool to reflect commitments made by the applicant and to safeguard neighbour amenity, and concerning provision of suitable facilities for recycling at the site."

Deputy Lester Queripel was the only political member of the DPA to vote against the application "on grounds of the likely effect of the development on roads and other infrastructure, traffic and essential services." Deputies John Gollop, Dawn Tindall, Marc Leadbeater and Victoria Oliver all approved the application.