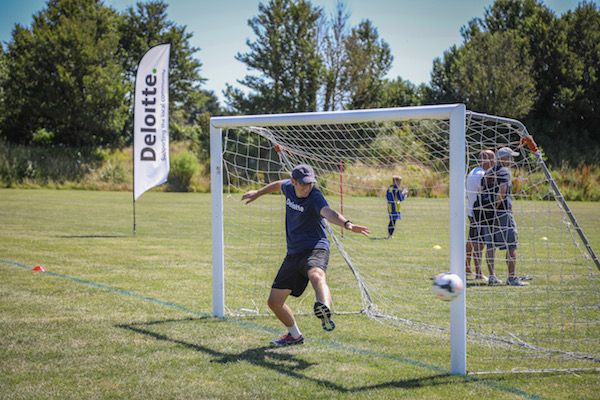 The Guernsey Football Association and Deloitte are holding their Summer Fun Football Festival today, with a number of games due to be played at Victoria Avenue.

Following the success of last year’s event, the GFA said it is "once again hosting the Deloitte Summer Fun Football Festival" today (Saturday 16 June) at Victoria Avenue, with the event planned to "celebrate the culmination of the GFA’s free school coaching sessions which are aimed at getting children across the Bailiwick involved in football."

The GFA’s team of community football coaches have spent time in 12 of the Bailiwick's primary schools throughout the year, including Le Rondin and Les Voies, which was also possible through the sponsorship agreed with Deloitte.

Through that scheme, the team spend half a term with each school, working with the teachers to offer weekly training sessions for classes of around 30 children. More than 500 children have benefitted from this activity, which the GFA said puts an emphasis "on building confidence and reinforcing the importance of good effort, play and behaviour, instead of criticising negative responses or mistakes."

Those skills and characteristics will be demonstrated at today's football festival which the GFA said "will follow the same themes, with all participants receiving a certificate and medal for taking part."

This year’s festival will see mixed teams from Years 3 and 4 and all-girl teams from Years 1 and 2 compete in a series of matches. 12 teams had signed up ahead of the event, with more expected to have signed up closer to the time.

Angus Mackay, Football Development Officer at the GFA, said; "The Football Festival got off to a great start last year, and this tournament has attracted even more teams."

David Becker, Partner at Deloitte, said, "We’re committed to supporting community sport and working with the GFA to deliver these coaching sessions to local school children has been really rewarding. Last year, the Summer Football Festival proved a huge hit, and we’re looking forward to seeing even more children enjoying a kick-around in June."

A bouncy castle and inflatable goal will also be available for youngsters and less competitive festival-goers to enjoy.