FOCUS: Future of Bird Observatory could be shot down in full flight 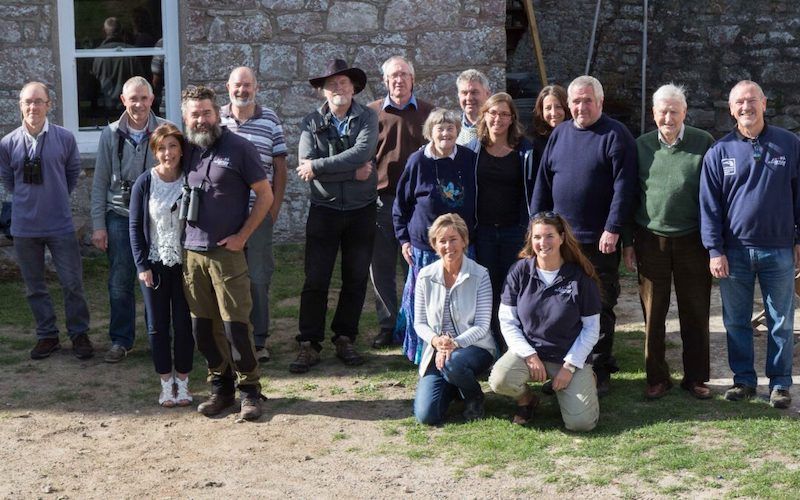 FOCUS: Future of Bird Observatory could be shot down in full flight

It is D-Day for the internationally-acclaimed Alderney Bird Observatory, which faces being evicted from the Nunnery over claims that it has broken the terms of its tenancy agreement.

Alderney politicians will decide today whether to allow the charity to stay at the recently refurbished Roman Fort - or to kick them out.

The island's Policy & Finance Committee says the ABO has not provided financial returns on the States' investment. In the Committee's policy letter, Chairman Bill Abel also cited anger from other accommodation businesses about the ABO's subsidised tenancy agreement.

The charity took over the site in 2019 following its split from parent company the Alderney Wildlife Trust, which had previously managed its back office and banking services.

Despite that, plans to revamp the historic site progressed, with politicians signing off £300,000 worth of refurbishments to the Nunnery after the observatory's soaring success from a husband and wife start-up, to an internationally recognised centre of excellence. 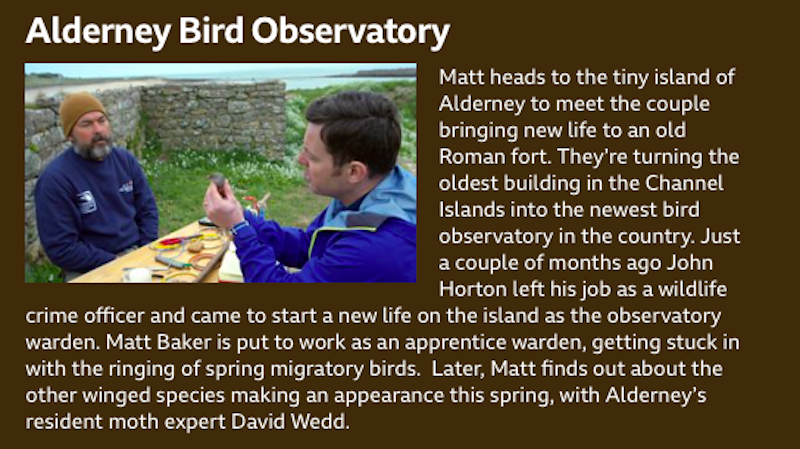 Pictured: The ABO received a visit from BBC Countryfile in April 2016. Matt Baker and the team were able to catch on film Alderney's bird migration –  which surpassed all expectations as 3,500 birds were ringed by the end of the ABO's first spring and over 13,000 by the end of its first year.

“The issue is about The Nunnery lease, not about the ABO,” Mr Abel stressed ahead of today's critical debate. “It is about the use of The Nunnery under the ‘purpose of use’ which justified the original refurbishment.

"The lease was awarded on a peppercorn rent (£99 per annum) to fulfil the purpose of the Nunnery as a field centre and to provide hostel accommodation for the bird warden and heritage groups. However, the ABO have used the centre as a source of revenue to support the aims of the ABO and to provide income for the ABO."

The concerns of other accommodation providers "has been a point of contention over the period of the lease", said Mr Abel, and those have to be listened to.

In an interview this week with AYNews, ABO Chairman Neil Harvey rebutted those comments, saying a lease had never been formally agreed, only a tenancy agreement that he suggested "we have adhered to but the States have not".

Pictured: The ABO's tenancy agreement for the Nunnery ended on 31 December 2020 and has continued since on a rolling monthly basis.

At the heart of the ABO's journey is its Warden, John Horton, a former Wildlife Crime Officer for the Metropolitan Police who moved to Alderney to head up the trial observatory project back in March 2016.

The ABO's research, monitoring and bird ringing soon attracted journalists, wildlife enthusiasts and a plethora of headlines in widely-read publications such as The New Scientist. By February 2019, the group was in full fight on its way to accreditation status from the British Bird Observatories Council.

The bitter divorce from the AWT cost Alderney its accreditation, which was regained by the reformed ABO Ltd just 12 month later.

Those who spearhead the charity highlight the positive press, leading research and ecotourism they have brought to the northern isle, particularly during the shoulder months.

"We didn’t expect to be as successful as we were," Mr Horton told Express. "We are not only one of the most established British bird observatories, we are an international centre of excellence in terms of conservation and research-led science.

"If it wasn’t for the observatory, the Nunnery would either be in ruins or it would be private land and no one would have access to it.

"But they are trying to end us. Without the Nunnery, where are we going to go?"

Mr Horton says the concerns expressed by other accommodation providers ignore the economic boost that the observatory's visitors bring to the island.

"When we launched in 2016, tourism was virtually dead outside of June, July and August," he said.

“Since then we have continued our excellent work and we bring in a quarter of a million pounds in free advertising to Alderney per year.

"For example, we had a full page feature in The Telegraph – that’s £90,000 worth of advertisement on its own. It went out to 13 million people and exceeded the entire [tourism] budget of the States of Alderney in one hit."

He continued: "The entire accommodation sector reaps the benefits from that. [Losing the observatory] would have a horrendous knock-on effect.

Having led the way, Mr Horton fears that Alderney could end up as the only island in the Bailiwick that doesn’t have its own bird observatory.

"At the same as this is happening, we have Guernsey recognising the continued success of the bird observatory and wanting to emulate it," he said. 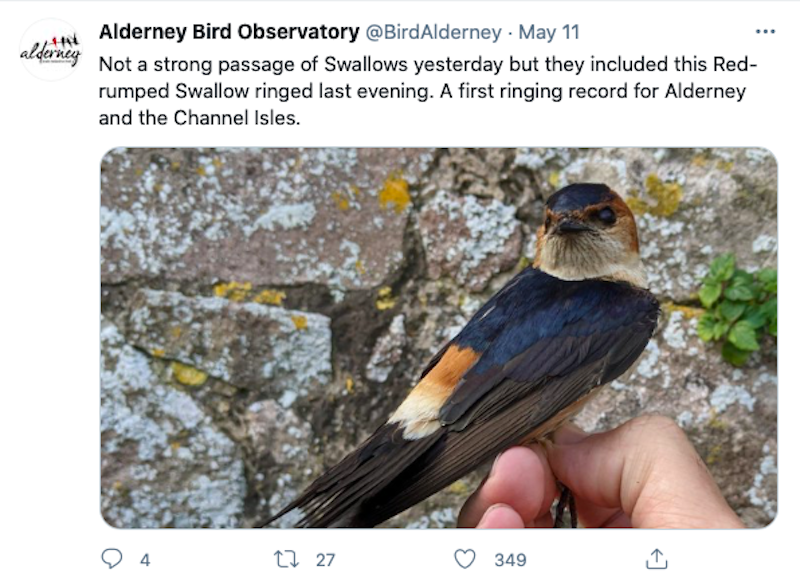 Pictured: The ABO posts regular updates on its social media pages of new ringings and other migratory research.

“We are struggling to understand the motives of the States Members who are driving this through, especially as there appears to be no forward plan for what they intend the Nunnery to become.

"We feel that those proposing this change are making decisions based on misinformation and there has been a failure on the States Members’ part to meet with the ABO.

"It was a complete shock that they would ditch something that has been so successful. It's really disappointing - I feel like I am witnessing the worst form of small island politics."