FOCUS: A dispatch from the frontline of an amicable "act of war" 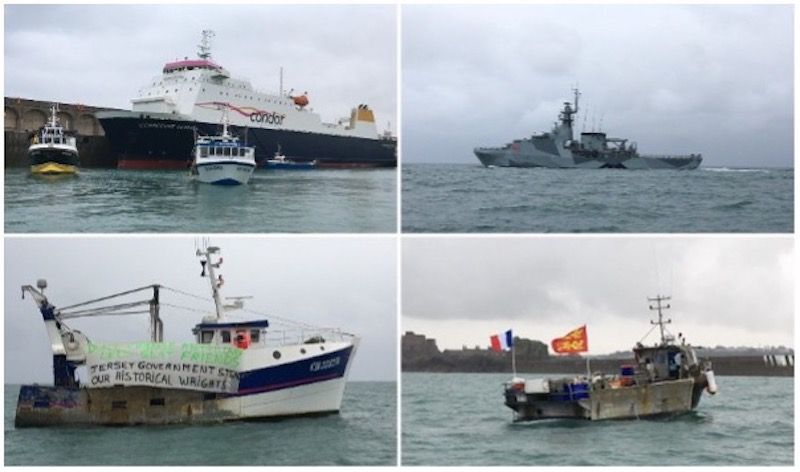 FOCUS: A dispatch from the frontline of an amicable "act of war"

It was a grey, miserable morning when around 70 French fishing boats arrived off St. Helier between 05:00 and 06:00 yesterday. Initially, they mustered in St. Aubin’s Bay, south of Elizabeth Castle.

A few boats lit flares and unfurled banners while HMS Tamar slowly sailed in the murky distance, keeping a watchful eye but never getting involved.

There was an assortment of shapes, sizes and colours – large trawlers, with high open sterns and solidly built arches to haul in their nets, passing smaller boats with a small forward cabin and little else.

Massabielle from Granville, Hegoak from Carteret, Mustang from Erquy, Boree Al from Cherbourg, Thais Leo from St Brieuc to name but a few…scores of boats from ports on the surrounding Norman and Breton coasts.

Some released flares, one fired off a cloud of orange smoke, another unfurled a banner, which said: “Don’t change anything. Let’s be friends. Jersey Government steal our historical wrights.”

The spelling may have been slightly awry, but the message was clear. 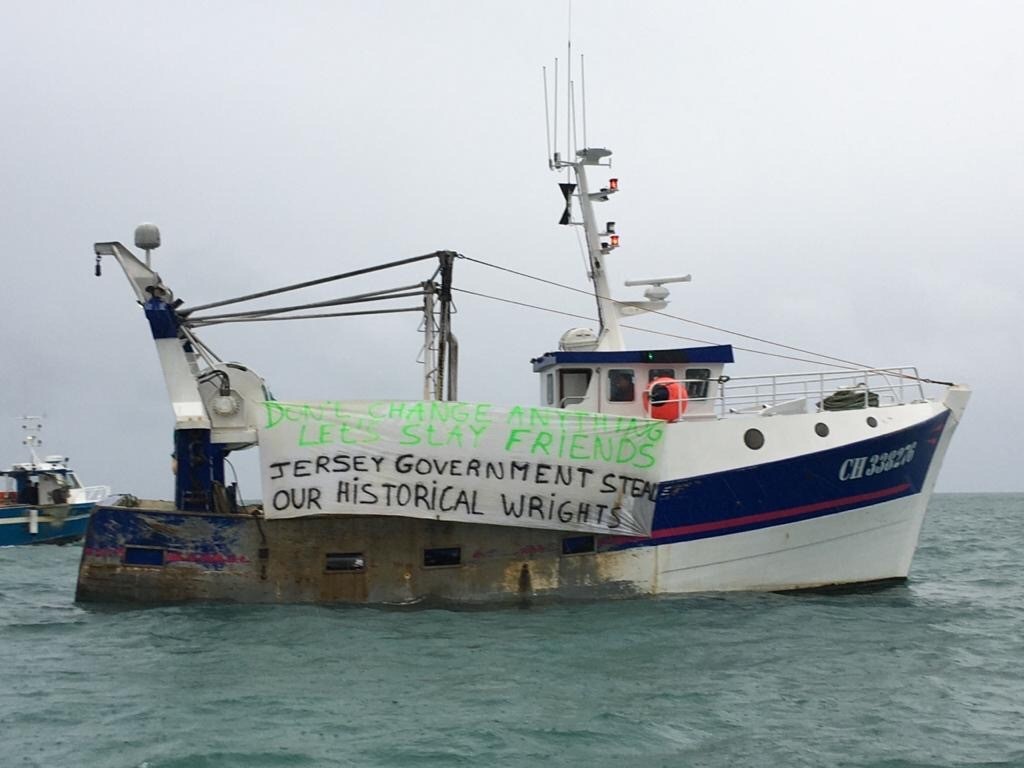 Pictured: One of the protest signs on show.

At 06:30, all bows pointed towards the Harbour and the fleet sailed into the Small Roads between the castle and La Collette. And in they sailed – but only as far as the pierheads. And after ten or so minutes, they turned around and headed back out to the bay.

It was calm and quiet, with only a few people waving Jersey flags from the end of the Albert Pier. The only activity of haste were the few ribs carrying media darting between boats.

One Jersey speedboat, possibly acting a bit too provocatively, had some rough justice when it was bumped by a fishing boat.

And a rogue militiaman, whose watch clearly stopped in 1781, fired a musket from Elizabeth Castle. Apart from that, there were no signs of war.

In the streets of St. Helier, just a few hundred metres away, life carried on as normal. If commuters heading into the office or dropping the kids off to school were worried about an imminent fishing war or island-wide power cut, they didn’t show it. Or know it.

With the French fleet returning to their holding position in the bay, there was a pause, with activity transferring from the sea to VHF radio. The Normandy Trader – owned by Chris Le Masurier of Jersey Oyster, who had not been backwards in coming forwards in criticising the Government over its new licensing regime – then took centre stage.

Earlier it had joined the French protest in the bay, flying the Jersey flag from its elevated crane, pointing skywards like a large metallic digit.

But the former military landing craft then became a peace shuttle for French representatives from Granville, Carteret and Saint Malo, who climbed onboard to be taken to its usual berth alongside the Victoria Pier, afterword was sent that a Government delegation was prepared to meet them. 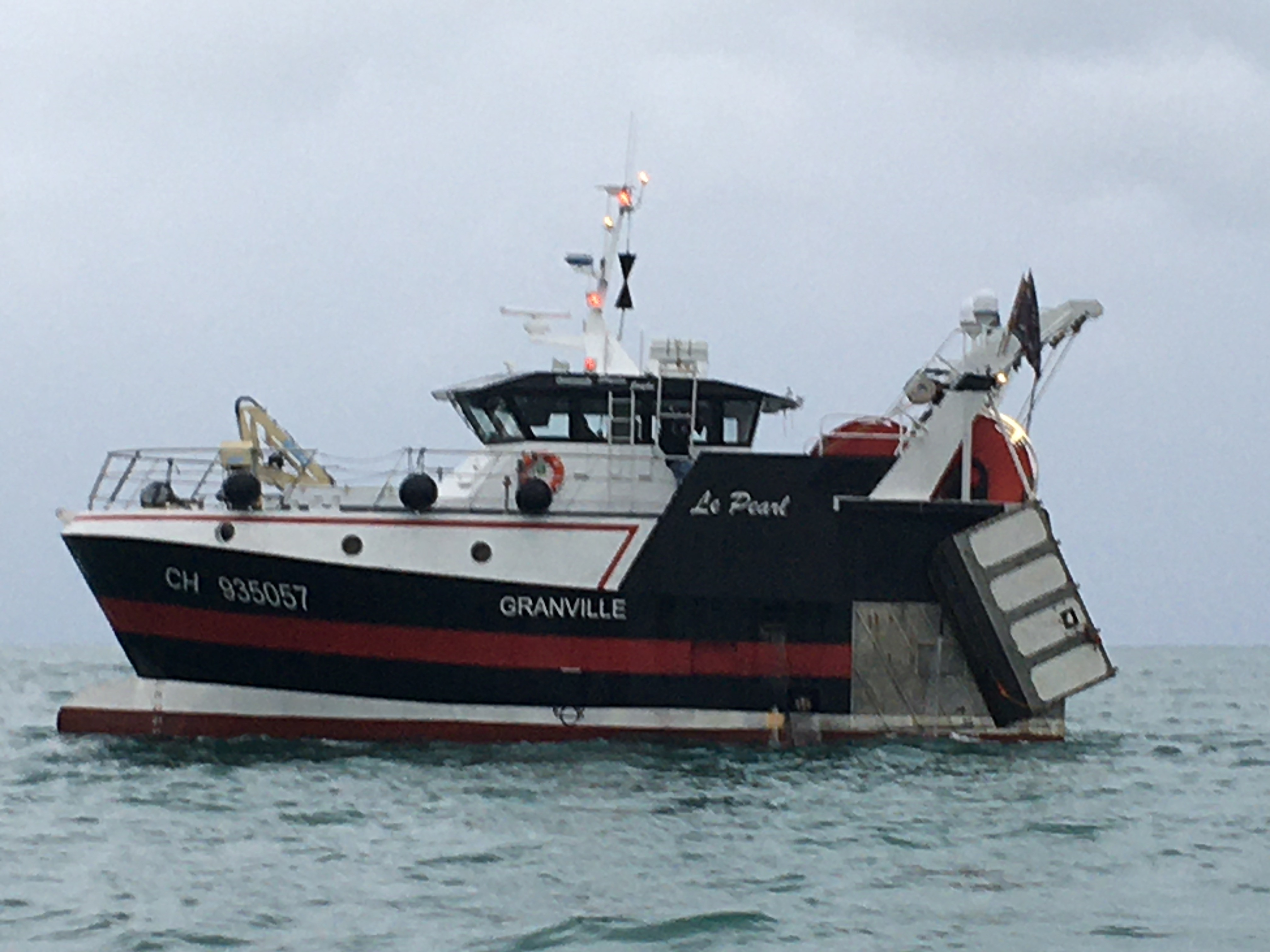 Pictured: The trawler Le Pearl joined the protest from Granville, where most of the fleet came from.

Briefly, some of the French fleet returned to the Small Roads but not as many as earlier. As the Normandy Trader entered the St. Helier Harbour, the boats again retreated to resume their slow toing and froing south of the castle.

Not long after the Normandy Trader berthed, the States’ Fisheries Protection Vessel, Norman Le Brocq, left the Albert Pier and slowly motored across to the Victoria Pier, tying up to the blue and white landing craft.

With France still considered a ‘red’ country for covid, the two sides stayed on their respective boats, with Assistant Environment Minister Deputy Gregory Guida, a Frenchman himself, leading the Jersey negotiations. Their conversations could not be heard from the pier, but it was certainly animated: Deputy Guida’s arms gesticulating widely as he, presumably, stressed Jersey’s position to his Gallic compatriots.

As discussions continued, with both sides occasionally retreating into huddles to confirm their positions, the Commodore Goodwill left for Guernsey and Portsmouth, full of Jersey Royals.

Having been delayed since 07:00, when it would have been dangerous to leave with so many boats immediately in front of it, the ship left without incident. If this was a blockade, it was as leaky as a Cabinet Office meeting about Downing Street renovations.

In truth, the fishermen had promised that they wouldn’t disrupt commerce and while the Goodwill and fuel ship’s departures were delayed, it fortunately wasn’t because of any active blocking. 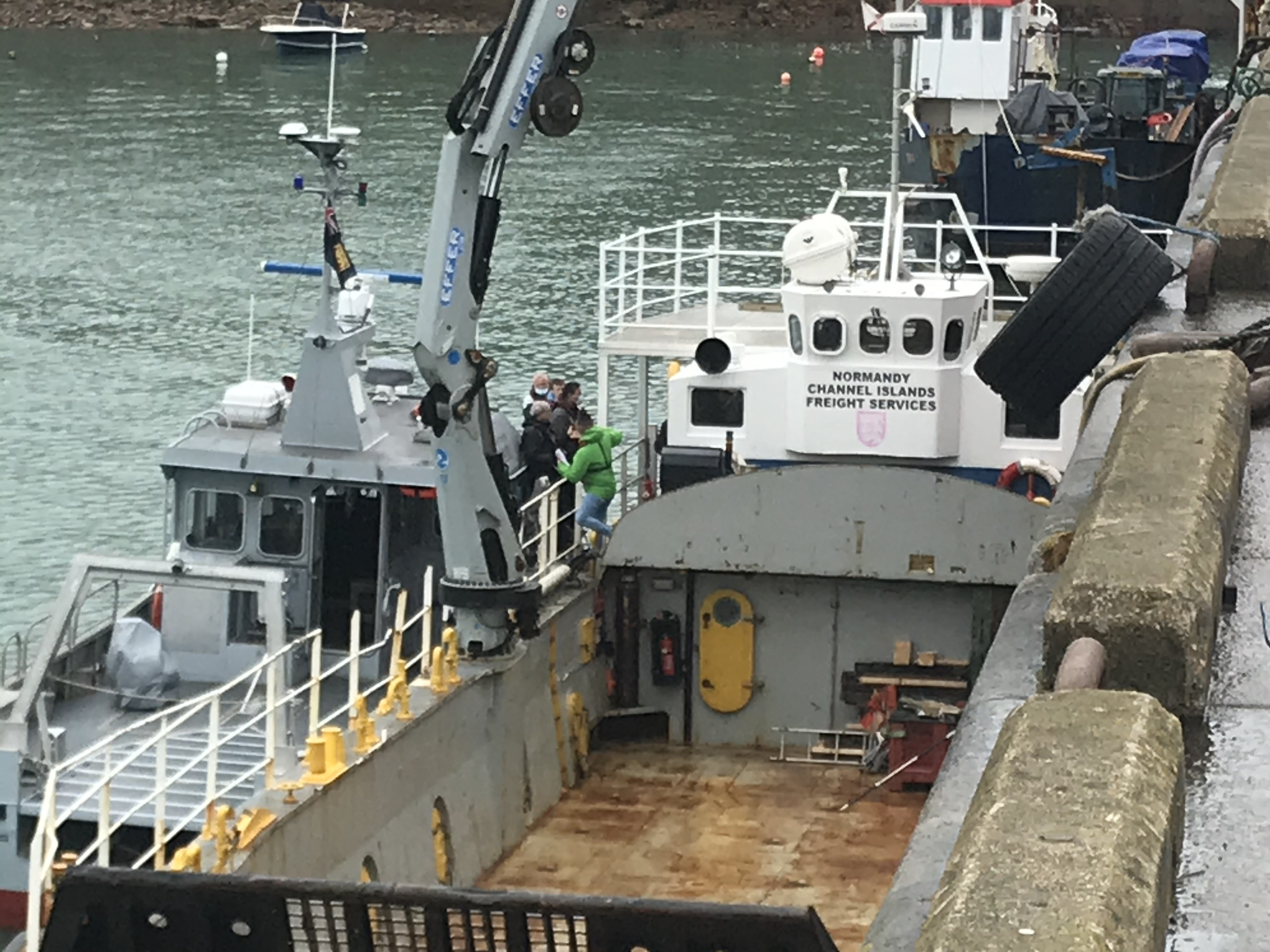 Pictured: There was little sign of gunboat diplomacy in St. Helier Harbour.

Just before lunch, the Norman Le Brocq and its delegation returned to the Albert Pier and the Normandy Trader took its half-day trippers, including French media, back to their vessels. Soon after that, the fleet left, to quickly bomb-burst to their various home ports south and east. The captain of the Pearl, a trawler from Granville, was heard muttering over the VHF that the discussions were “m*rde”, but stressing that violent acts were not on the agenda for today, as he retreated.

And so, the drama was over, at least for the day. Whether the affected fishermen are able and willing to provide the required data that the trade agreement - and Jersey - demands is one for days and weeks ahead.

HMS Tamar and Severn remained to the south and south-west of Jersey, presumably to check that the French fishermen didn’t contemplate a volte-face.

However, they now have the green light from London and Brussels to talk directly with one another.

Why that light wasn’t turned on earlier is a question that many will, no doubt, like to see answered.

Posted by Robert Williams on May 7th, 2021
The seemed to be more of a day out for the French fishermen.
Why do they think Jersey shouldn’t control its own waters?
To place a comment please login Login »