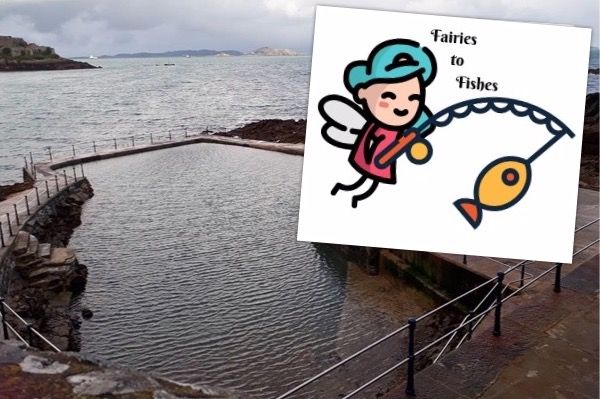 A fundraising walk, initially set up by one man who wanted to do something to thank a charity which helped him, is back for a second year with many more people getting involved.

Trevor Mahy first came up with the idea for the Fairies to Fishes walk last year. He gave his daughter, Marcia, ten days notice that he wanted to do the 18.5mile challenge - with her support, which she agreed to do.

Marcia said when they did the walk in July last year, they started with 10 people at the Fairy Ring at Pleinmont, and they had up to 20 by the end as other people joined them along the coastal route on their way into St Peter Port.

"He really wanted to do something for the Guernsey Society for Cancer Relief," said Marcia. "They really helped our family out a lot. We know that the money we raise is going to go to local families which is why he was do keen to do it for that charity.

"He said to me, 'what are you doing in 10 days time?' - 'I want to do this, will you do it with me?' so I did. He had to do it in a window of his chemo free week as he was fitting it in between chemo sessions."

Having not given his daughter long to get ready for the walk last year, she only asked if this year the walk could be held in June rather than July so it wouldn't be so hot, but the weather forecast for today was to hit a high of 24c

Trevor sadly passed away in April this year, but Marcia said she and her family are going to walk in his memory today. She said nothing would put him off last year and he had planned to be involved this year too.

"He was fit but didn't do long walks like that, he climbed mountains including Machu pichu but he was not a fitness fanatic."

She said he chose the 18.5 mile route starting from the Fairy Ring at Pleinmont at 08:30, to the Aquarium because it was flat and would be manageable for anyone who wanted to take part. The idea is that people can join in at various points including Vistas at 10:30, Rousse at 12:30, Chouet at 13:30 or Bordeaux at 14:30.

Marcia has no idea how much money could be raised this year, but it could raise more than the 2018 event which Trevor did himself.

"He wanted it to be something which suited everybody if they wanted to join in. We raised so much momentum in just 10 days. His aim was to raise £1200 and he did £1400 by the the day (of the walk last year). The grand total was £8,000 in total as the only kept coming in for weeks and months afterwards."

This year, Marcia says they've already raised £1,135 with at least another £300 to come in plus anything which is donated on the day or afterwards. Donations can be made via giving.gg

While Trevor won't be walking this year, the event which he thought up as a one-off initially could become a regular feature on the fundraising calendar in Guernsey.

"He was very active up until the time he passed away," said Marcia. "He was very keen on being active and not letting it get him down. He didn't want it to beat him. I'm very very proud of him. Now everybody has jumped on board, doing it for him, doing it for Trevor and to make sure it still goes ahead.

"He was adamant that when he realised he wasn't well enough to do it he was going to be at every stop. He'll still be with us on the walk - I have his hat that he wore last year, he wore it all the time, so I'll have his hat on the backpack."

As well as Marcia, her sister in law Lyndsey, who is married to brother Wayne, has helped to organise the walk. She'd received around 30 emails from people wanting to do the walk, so they were expecting at least 40 people to start this morning, with more people joining in along the way.

"It's not an organised thing - this is dad's walk but if people want to join in that's great," said Marcia, who added that it may become a regular event.

"It's certainly something dad wanted to happen, he'd like it to be a regular thing. It's just, how big do we want it go? There are so many walks for so many great causes, but that was his wish, that it would become a regular event."

As the Fairies to Fishes walk is not an organised official event, walkers will have to carry their own water and supplies, but Trevor's wife Rose will be at every stop with water and offering other support as needed. Marcia said her dad's sisters and cousins are also doing the walk meaning there'll be at least five family members completing the challenge.

The 66 motorbike group that Trevor was a part of "in his heyday" said Marcia, will be at Vistas with buckets to collect money for the Guernsey Society for Cancer Relief, and they'll then be following the walkers as they make their way to the Aquarium at the end. Marcia wanted to thank them all and especially Martin Lowe for their support.

Another family who have lost a loved one this year will also be walking. Marcia said Miranda Prigent's family will be taking part with her brother Shane Rosamond expected to do the full walk with other members of the Rosamond and Prigent families meeting them on the way as they walk into town.