"If the States are over-staffed with civil servants, I haven't found them" 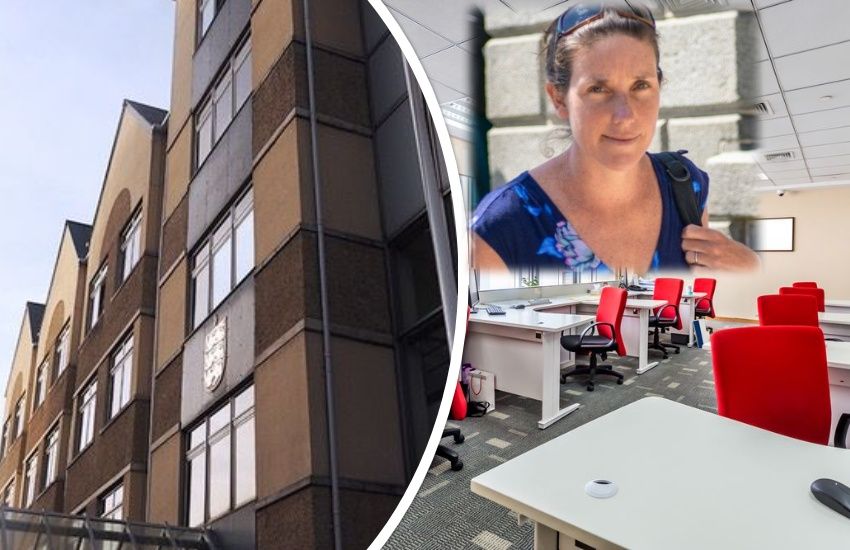 "If the States are over-staffed with civil servants, I haven't found them"

The President of Environment & Infrastructure says her Committee lacks sufficient staff to meet existing demands even without the additional work expected of it in the rest of this States' term.

Deputy Lindsay de Sausmarez told a scrutiny hearing today that one of her biggest concerns was the effect of inadequate staff resources serving her Committee.

“If the States are over-staffed with civil servants, I haven’t found them. They are certainly not under the Committee for the Environment & Infrastructure's mandate," said Deputy de Sausmarez.

"The States' Chief Operating Officer has said that, when they did an informal audit of resources, he agreed that we were particularly stretched in the area under our mandate." 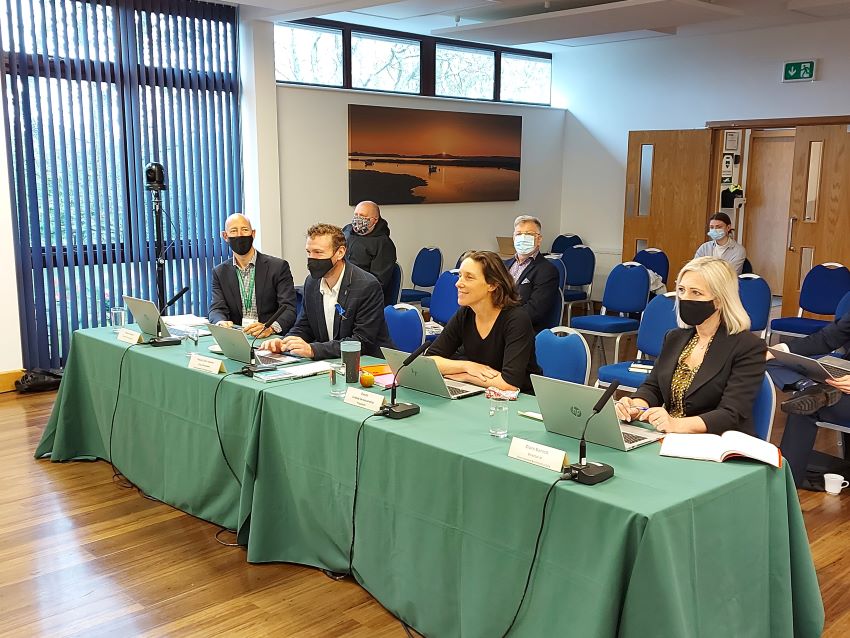 Pictured: Members and officials of the Committee for the Environment & Infrastructure at today's public hearing at the Castel Douzaine rooms.

"This problem stretches not just across policy work but also across business as usual and operations...the kind of things which we cannot afford to cut back on unless we’re prepared to suffer the consequences of that," continued Deputy de Sausmarez.

"We know that in many of the nuts and bolts aspects – for example, road maintenance and coastal defences – a stitch in time saves nine and we know that it’s much, much more cost effective to get that work done in a preventative manner and in a timely manner than wait for things to go horribly wrong.

"I really do worry about cutting back on any of that kind of work because I think it will be much more costly for us in the longer term."

Deputy Yvonne Burford, President of the Scrutiny Management Committee, who chaired the public hearing, asked Deputy de Sausmarez to be clear whether she was saying that her Committee has a problem delivering even everyday, business as usual activities. Deputy de Sausmarez said: "From my perspective, yes." 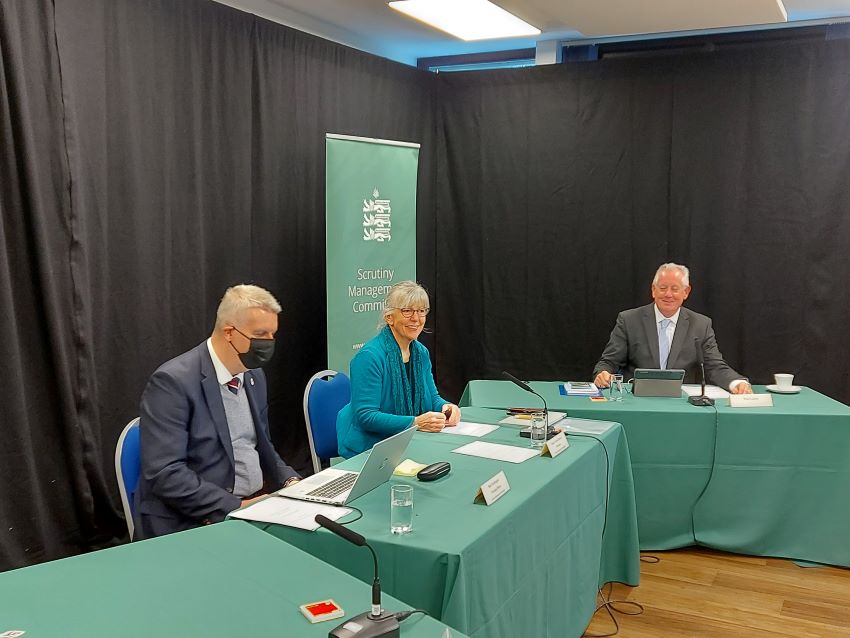 Deputy de Sausmarez said that she has repeatedly voiced her concerns about staff resources, including at a meeting of various committees' presidents, which she had to leave early to appear at the scrutiny hearing.

"Often there will be similar head count, but it’s people being brought in at a lower level often without the same depth of expertise and experience.

“I can’t go into specifics. I’m not going to sit here and name names. But I’ve long had a concern about the thinness and the degree to which our human resources are stretched, and I worry about the impact that has in human terms." 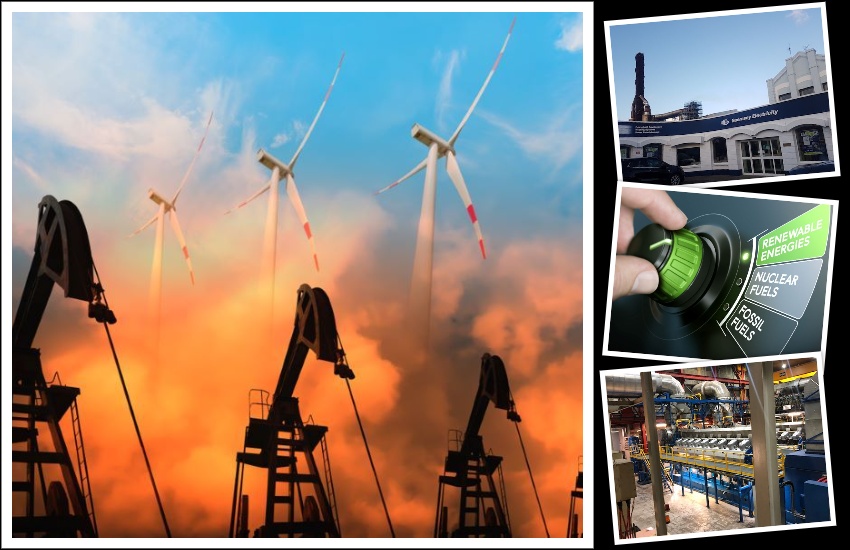 Pictured: Responding to climate change and future energy needs are among the significant long-term policy challenges facing the Committee for the Environment & Infrastructure, but its President, Deputy Lindsay de Sausmarez, says staff shortages imperil even the Committee's everyday work.

Deputy de Sausmarez said that the biggest challenge is often being unable to recruit and retain staff rather than lacking adequate budget to pay for the necessary posts.

“I don’t think we’re that competitive with the private sector," she said.

"We’ve also had vacancies on our books for what strikes me as an extraordinary amount of time – we’re talking years sometimes.

"I just think something is not working – or possibly quite a few things are not working.

"As an employer, I would like to see us step up a bit." 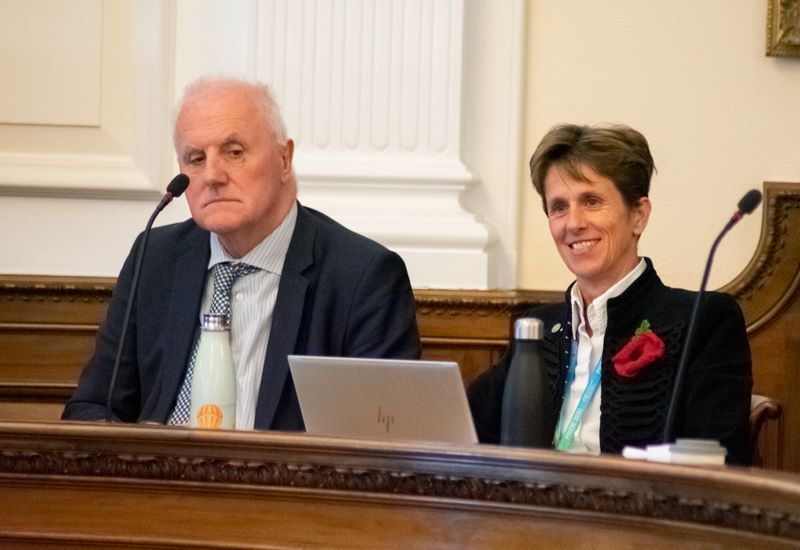 Pictured: Deputies Peter Ferbrache and Heidi Soulsby, the President and Vice-President respectively of the Policy & Resources Committee, are leading an initiative to reduce posts in the civil service.

Deputy de Sausmarez said she has often held discussions with officials about how to overcome staff shortages and made some suggestions but also said that recruitment is an operational matter.

The most senior official alongside Deputy de Sausmarez at the scrutiny hearing was her Committee's Director of Operations. He said he "totally agreed" with what his Committee President had said.

"As Deputy Peter Ferbrache pointed out earlier this week, governments expect to do a lot with little," he said.

"That’s a problem across all committees. I know that is something that will be looked at as part of the review of the Government Work Plan – to see how we can do slightly less and concentrate on those matters which really have an impact, which is obviously going to be very challenging."

Infrastructure WILL be considered as population grows