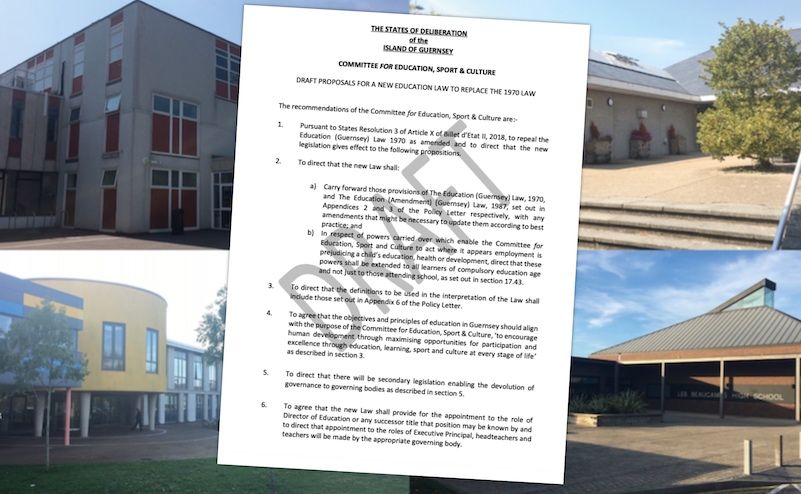 With two deputies calling on Education to commit to implementing “local management of schools”, Express has explored the arguments for greater devolution, analysing the Education Law policy letter that was drafted but never submitted by the outgoing committee.

The current Education Committee is looking to clear the books of outstanding resolutions relating to secondary education as it bids to take ownership of future policy.

It has sparked concerns that previous proposals to devolve leadership and governance from the Education Office to school leaders will fall off the agenda. The committee has stated its "intention" to review the law once strategic decisions are made on the way forward for secondary education.

Deputies Peter Roffey and Jonathan Le Tocq have signed off an amendment to the Government Work Plan in an effort to "retain the States’ clear commitment to bringing in legislation to permit local management of schools by appropriate boards of governors, instead of all state schools being subject to political governance as per the current law."

"Such a move was one of the prime recommendations of the “Mulkerrin Report” and has enjoyed wide consensus support in successive assemblies," the amendment states. "At the same time the amendment removes any presumption over what model of secondary or further education will be adopted." 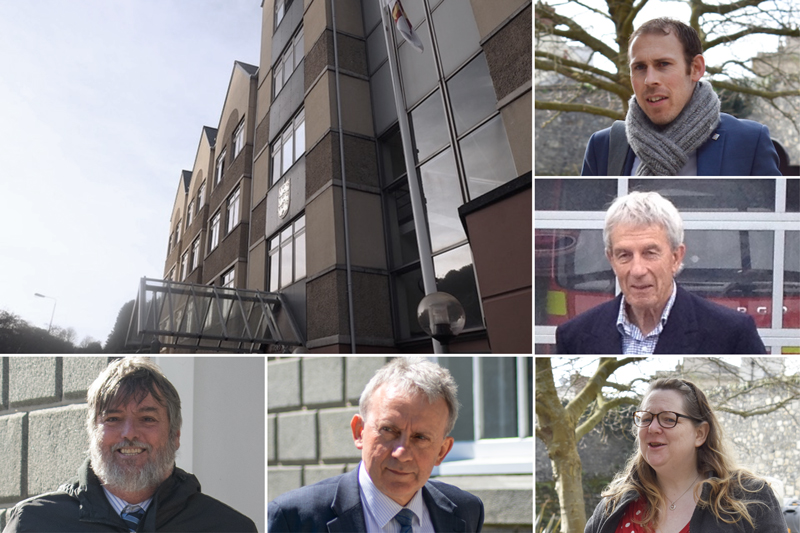 Pictured: The draft policy was drawn up by the previous Education, Sport & Culture Committee, three of whom lost their seats in the States at the 2020 election.

Education is looking to scrap all the existing resolutions that are annexed to the one-school model put forward by the previous committee, constituted by Deputies Matt Fallaize, Richard Graham, Rhian Tooley, Mark Dorey and Peter Roffey.

That committee drew up proposals that would reform the Education Law, by setting into motion a "genuine devolution of governance and leaderships" to school leaders, and bringing the legislation in line with "the aspirations of a modern democratic society". After the 2020 Election was rescheduled following the pandemic, it is understood the committee ran out of time to submit it.

“For many years it has been widely accepted that the existing legislation is out-dated, does not meet the needs of a modern education system and fails to capture the powers and duties expected of a 21st century government," states the draft policy letter, which has been obtained by Express.

The wider transformation of education was viewed as a good opportunity to update the law, which formally dates back to 1970 but in reality is entrenched in post-World War II ideology.

The draft policy letter, which can be read in full HERE, argues that the current system of centralised governance and accountability does not empower schools to be the key decision-makers on important operational matters. It says there is  little flexibility for headteachers to target resources to meet needs, particularly in the case of HR and financial resources.

Instead decisions are made at a central level, by the Education Office and Committee, "away from those best placed and most informed to do so."

"Additionally, the level of autonomy between schools is variable and because arrangements underpinning this have no formal basis they are at risk of inconsistency and there is a lack of clarity in respect of responsibility and accountability. The absence of formal governance provisions manifests in the Committee operating as governing body for all States maintained schools.

"This was identified as a significant weakness in 2012 by the Mulkerrin Report and a recommendation was made for the devolution of responsibilities to school governing bodies in a system of school accountability similar to that in the UK." 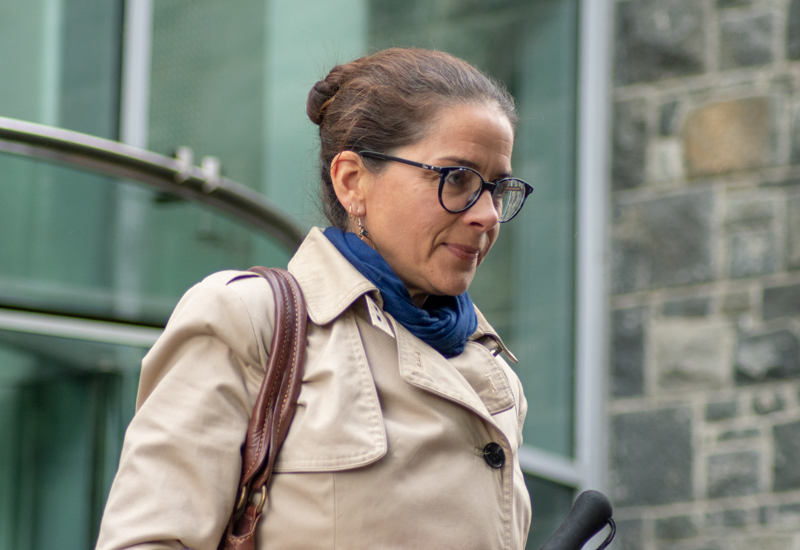 Pictured: ESC President Andrea Dudley-Owen said it would be a dereliction of duty and bad governance to accept and finalise draft policy letter without her committee reviewing the Education Law itself.

The draft policy letter proposed doing away with school management committees, in favour of new governing bodies that "require an identified skill set and level of knowledge and expertise that is appropriate to the level of devolvement and accountability."

It posits that the key to good governance lies in the interaction between the governing body and the senior leadership team, with governors providing valuable challenge and inquiry without unnecessary interference.

"Where there are effective governance arrangements in place it can transform the culture of a school; not just through holding school leaders to account, but by involving all staff, parents and the students in the vision of continuous improvement," the policy letter concludes, however the document holds fire on laying out exactly how this should be implemented.

"There is still a level of detail to be considered and the views of the wider profession are required before exact models are agreed."

Covering a lot of ground and containing 37 separate resolutions, the wide-ranging document also:

It was the result of almost two years' worth of work.

“Since January 2018, work has been under way to review the current Education Law, identifying [what] workswell and should be retained, elements that are no longer appropriate and those elements that are missing, in order to develop policy recommendations for the replacement legislation," the former committee wrote early last year.

“The review has been comprehensive. Engagement with subject matter specialists through working groups has ensured that the technical aspects of these proposals are grounded in current best practice.

“Recommendations have also been considered by external stakeholders to obtain feedback from individuals and groups most likely to be affected by the proposals. Public consultation has also been carried out and the responses analysed to ensure the voices of all stakeholders are reflected in the proposals. The proposals capture the strategic aim of promoting excellence and opportunity across education in Guernsey within a Law which is permissive and enabling." 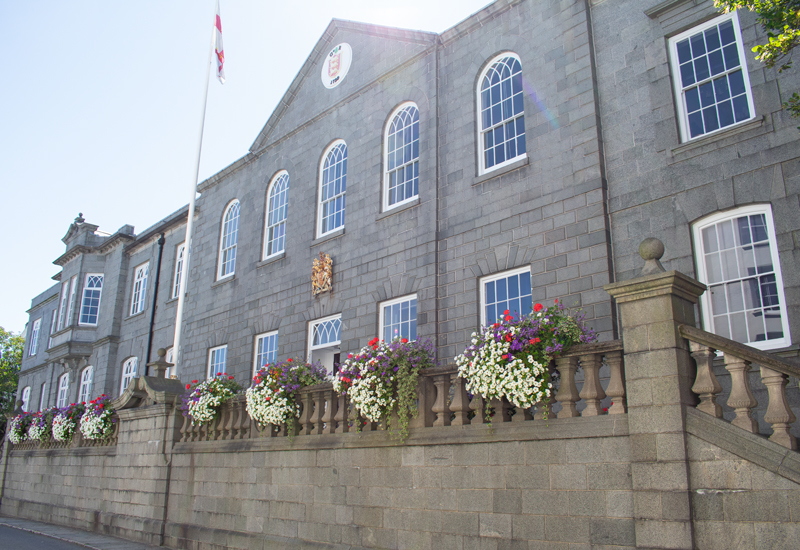 Pictured: ESC's proposal to rescind all outstanding resolutions linked to secondary education will be debated by the States on 17 March, just over a year since the Assembly voted to "pause and review" the previous committee's one-school model.

The committee's post-election successors, headed up by Deputy Andrea Dudley-Owen, said it is her committee's intention to progress a new Education Law within the next 18 months.

However, in a strongly-worded statement, she said it would be a "dereliction of duty" to simply pick up the work done so far and submit it for debate, especially when the new States is yet to commit to a wider strategic direction to educational reform.

"The Committee inherited work in progress, which had not been formally signed off by the previous Committee, let alone ours," she said.

"There is a small group of people, including a few of our colleagues in the Assembly, former politicians and some journalists, who are trying to continually pit us against the previous Committee. The narrative seems to be that we should unquestioningly adopt work begun by that Committee. Aside from being poor governance, this is a new Committee duly elected – by both the electorate and the Assembly – to lead policy direction for Education, Sport & Culture and that is what we are going to do.

"We will continue to work at pace, to learn, to research, take advice and will with due consideration make changes, if necessary to policy. Much of the work of the Fallaize Committee is being continued by the new Committee, for example the completion of the SEND review and the introduction of Ofsted inspections, so that we have an evidence base to work from.

"There is no question of throwing away or ignoring work undertaken simply because it did not start on our watch – this would be ludicrous and a waste of valuable taxpayer-funded work and effort. No-one need worry that we are losing the baby with the bathwater.

“For resource heavy policy work, such as the Education Law, it would be a dereliction of duty to simply pick up somebody else's work and submit it to the States for debate without having reviewed the policy context against the current Committee's strategic direction and making adjustments where needed.

"In this instance it would also conflict with the principles that have been outlined in the Government Work Plan which has stated that there is to be no new legislation in the first year of this term, another reason why we have pushed the date out to so that we can prioritise the new Education law in the second year.”

Pictured top: The draft letter can be read in full HERE.