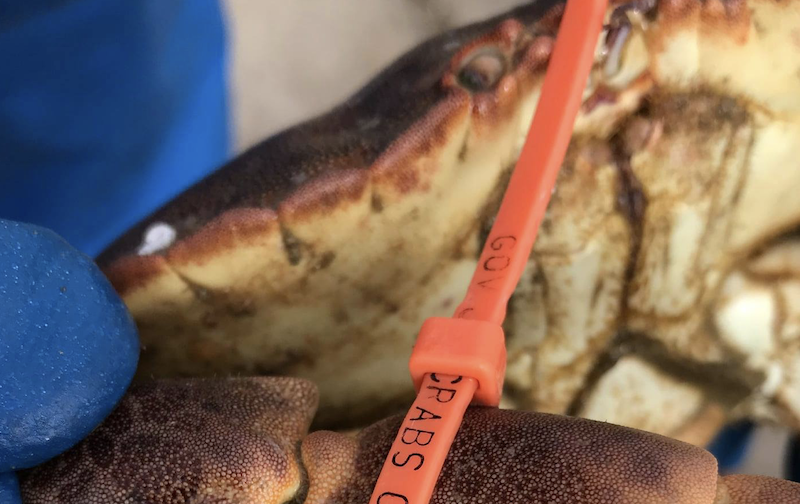 There has been a sharp decline in the amount of chancre crab being caught in Guernsey’s waters and it is hoped a tagging study will reveal why.

The States of Guernsey’s annual ‘Facts and Figures’ booklet for 2021 revealed that Guernsey’s edible crab catches have dropped year-on-year since 2016, with a reduction of nearly 300 tonnes of crab in three years.

It also revealed a 20 tonne reduction in lobster catches.

A Channel Islands team - led by Jersey Marine Resources - is now conducting a tagging study of brown crabs, better known as chancres. The study has been launched to better understand their migration patterns around the Channel Islands and to find out where they're going.

"The thing we’ve really noticed is a lack of juvenile crabs in rock pools," said Marine Scientist for the Jersey Government, Francis Binney.

"The baby brown crabs generally live in rock pools for the first stage of their life until they’re big enough to fend for themselves. We started to wonder where our grown up female crabs are going to spawn their eggs, because they don’t seem to be making it back here."

Pictured: Data for 2020 has yet to be published.

The issue was first picked up in Jersey, but is now apparent in Guernsey too.

“There is evidence of decline in edible crab landings throughout the English Channel,” said a spokesperson for Guernsey Sea Fisheries.

“The study on migration patterns should help in answering some of the questions on Channel crab populations.”

The data from the States of Guernsey mirrors a 2019 annual report from Jersey’s Environment Department that revealed a sharp decline in lobster and brown crab stocks.

Subsequently, a Lobster Working Group was launched in Jersey and a raft of management measures were agreed to by the island's Marine Resources Panel, including reducing pot allocations and recreational bag limits.

Due to the issue being picked up earlier in Jersey, the rules on minimum crab sizes differs to Guernsey's. In both Jersey and French fishing waters fishers can only take crabs that are at least 15cm wide, whereas in Guernsey it remains 14cm.

Pictured: Jersey Marine Services have tagged 400 crabs in a bid to try and understand their movements.

We asked Mr Binney if the experts are fearful of a complete loss of brown crabs from our waters.

“Absolutely," he said, "we feel that the bay the islands' sit in has seen a magnified issue of what seems to be happening throughout the channel.”

Various reasons for their departure have been hypothesised, from disease, to competition, however it could simply be down to sea temperatures rising and the crabs moving north.

"In Norway they’re seeing increasing numbers of brown crabs, so it might be a temperature driven move from south to north," said Mr Binney.

Local fishers are being asked to complete an online survey if they catch a crab that has been tagged. So far 19 have been re-caught in Jersey waters and one in Devon, however none have been officially recorded in Guernsey.

You can find details of the survey ONLINE.