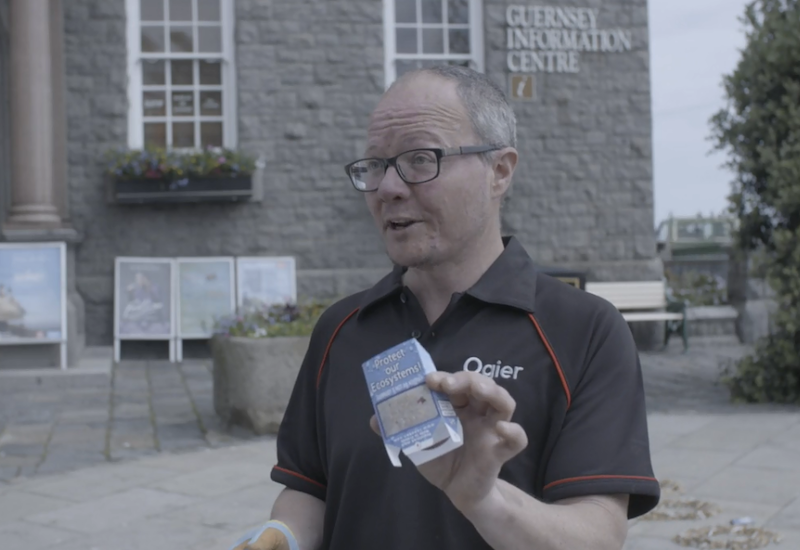 Through it, the society is looking for individuals, schools, community groups and charities which are taking extra steps to preserve and protect the environment.

Donations will be awarded to fund projects that aim to reduce human impact on the planet and improve the environment we live in, placing a priority on long-term environmental goals.

The Society’s Eco Fund has previously donated thousands of pounds to projects that hold an environmental focus. Such projects include protecting Guernsey’s endangered bees and supporting Alderney’s Wildlife Trust.

One successful applicant awarded funding last year was the ‘Pick it Up’ initiative (pictured top).

“Last year I started to research the damage that cigarette butts cause as toxic tea bags, poisonous plastic pellets and the dangers they are doing to our marine environment,” said founder and trustee Andrew Munro.

The Co-operative’s Eco fund had granted two lots of funding to the ‘Pick It Up’ initiative last year helping him with last month's visible campaign to collect cigarette butts.

“We received £1,100 which enabled us to import a pocket ashtray from a French company called Le Poket. We have purchased 7,500 of these which we are selling on to businesses at around cost so that there is a sustainable fund which can be reinvested, and the Co-op’s gift is not dissipated. We also received £600 to expand our ‘litter picking lending scheme’. We have distributed litter pickers in libraries around Guernsey which people can come and borrow like they would a book and we are also putting them into beach kiosks.” said Mr Munro.

“The Society’s Eco fund has been a huge success since its launch in 2011. We have supported hundreds of projects which have benefitted people of all ages across the islands and helped improve the environment we live in,” said Carl Winn, the Society’s Head of Marketing.

Applications for this year’s Eco fund will be open until the deadline on Wednesday 10 July.