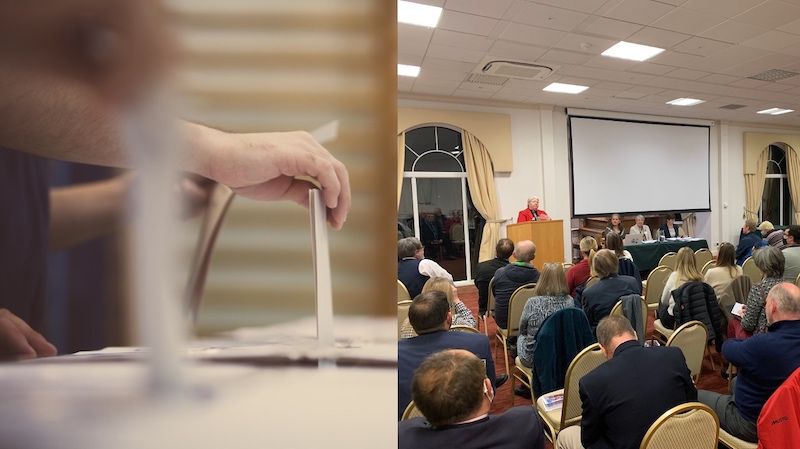 Parishioners in St Martin's and St Peter Port have been urged to make their vote count after the only two contested douzaine elections were deferred for two weeks.

However, the parish only just secured the seven votes needed to defer the election, with the room being asked for “one more person” to raise their hand and conclude the deferral.

Senior Constable of the Parish, Jeff Wilkes-Green, explained the benefits of deferring the election: “There are only around 50 people who have turned up tonight, so it can be advertised that we’re having a deferred election and over the whole day we can get a greater number of parishioners involved and engage with a wider audience.”

Although St Sampson's Douzaine Elections were uncontested for me as Douzenier and Constable, I just want all those in the parish to know, I will do my very best to serve you to the best of my ability

Pictured: St Sampson's Constable Leonie Le Tissier, elected unopposed vowed that she would work hard for the good of her parish.

@StPeterPortPari elections - democracy in the making, one of only two parishes having contested elections this year. Would ???? to see more islanders standing up for our island next time. #democracy #elections #parishes #SPP #town pic.twitter.com/CC2NYkPG0s

Despite allowing more of the electorate to get involved, the deferral will cost the parish due to advertisements of the election and the cost of manning the parish hall for the entire day, Mr Wilkes-Green added.

St Peter Port's elections saw a changing of the guard at the helm of the Douzaine, with long-standing Senior Constable Dennis Le Moignan stepping down.

The turnout – which failed to build on the strong participation at last year’s douzaine elections - has reignited calls from a local campaign group to reform the 1948 Law.

A section of that law requires the parishes to advertise the elections in La Gazette Officielle, which Women in Public Life Chair Shelaine Green says is both “costly and not in keeping with modern methods of reaching and inspiring islanders.”

All other candidates for parish constable and douzenier roles were unopposed on Wednesday 3 November.

The results of Guernsey's elections for Constables and Douzeniers:

Office of Douzenier (one seat for one year term)