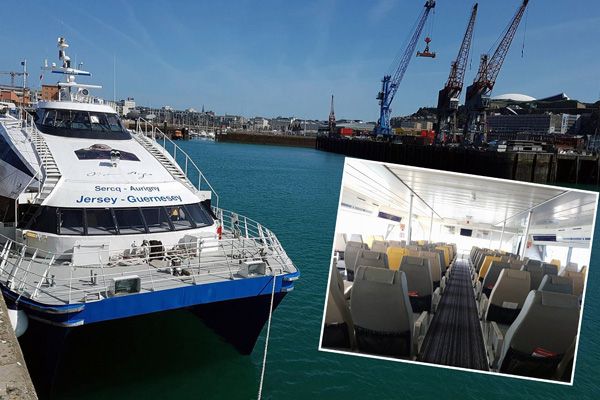 French shipping company Manches Iles Express has said a daily inter-island ferry service - which is what the States wanted - was "not realistic" because there's simply not enough business to support it.

Manche Iles recently refurbished its Victor Hugo vessel ahead of the start of the summer season, which will include 23 extra weekend return trips as part of an agreement with both islands.

The new services will provide almost 5,000 seats on weekend return trips between the islands this summer. The costs will be underwritten to a maximum of £95,680, split between both islands. That sum will only be required if the average capacity on the extra sailings is below 60%, or 130 seats. For each sailing that doesn't meet the target, the States of Guernsey and Jersey will jointly have to contribute £4,160 per return trip, based on the price of £32 per adult ticket.

While the States wanted to see a daily service between the islands, Manche Iles offered a maximum of 65 additional return trips between Jersey and Guernsey as well as 46 between Guernsey and Jersey. Olivier Normand, Commercial Director, explained: "A daily return service was too much. There is no market for it, the boats would have been empty...we told them that services during the week were not worth it. We told them 'It will cost you money, it will cost us money,' it would be better to work on the local market."

Hugues-Robert Gros, Manche Iles Managing Director, added: "When we heard about the tender between Jersey and Guernsey, it didn't seem realistic. A boat every day would have cost a fortune. It wasn't reasonable. We are a private company, we count money every day, and we could see it was not possible. So we looked at the request which seemed interesting but wasn't entirely satisfying because it was too high. We thought if we could discuss with the States, we could offer extra services, while still being cautious.

"We decided it would be more appropriate to add weekend services because that's when people want to go on a wander. During the week, the people who need to travel between the two islands, like businessmen, they fly. It's a bit quicker. The ferry takes a bit longer, it's a bit more uncertain because if the weather is not good or if the sea is bad, you have to cancel." 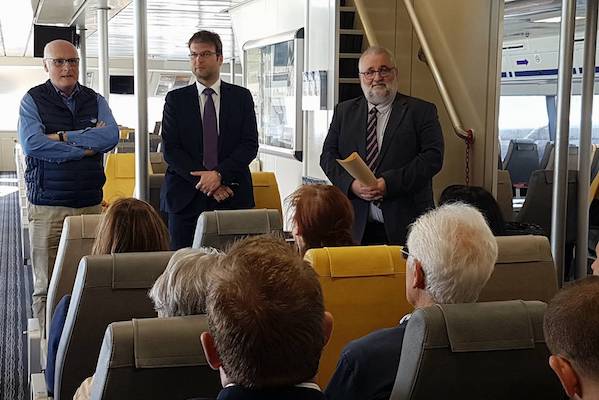 With its boats sometimes stuck on stand-by in either Jersey and Guernsey - "We can't go back to France because of the tides," explained Mr Gros - Manche Iles decided to put them to good use and send them between the islands. As Mr Normand explained, the company felt it best to work on the continuity of the already existing services between Carteret, Granville and Jersey or Diélette and Guernsey, instead of "taking more risks by putting on additional sailings." While Manche Iles is privately owned, it is accountable to the County Council of la Manche as part of a public service delegation contract.

Mr Normand said: "We have to get to that target of 130 passengers per sailing. The service is not profitable as of yet but we have reached the targets set by the County Council in terms of passenger numbers, sales revenue and margin.

"We didn't want the new contract with the States of Guernsey and Jersey to affect this, if we had difficulties filling up the boat. We offered to the States the same kind of agreement we have with Manche which means that if we don't get those 130, they will have to pay the difference."

With a recently refurbished vessel - the Victor Hugo has had a complete €1.3m (£1.12m) refit with brand new seats and an extended seating capacity of 236, funded by the County Council of la Manche - and up to 300 people already booked on the new sailings, the company is hopeful the new services will attract customers. Mr Gros said: "We are French, we know the French market but we don't know islanders' habits as well. We believe in this but we will start slowly. We hope it will work." 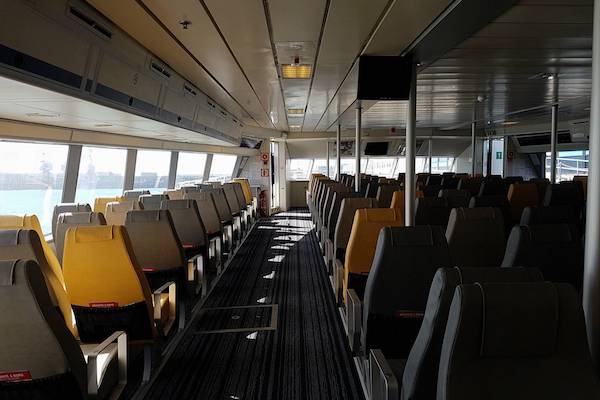 Pictured: Manche Iles recently refurbished the Victor Hugo vessel thanks to the County Council of la Manche who footed the €1.3m (£1.12m) bill.

Manche Iles will be meeting with the States of Guernsey and Jersey again at the end of the year and could be dropping the extra services if they don't prove successful. "On the other hand, if it is working, why not continue," said Mr Gros. "We could even consider to put on more services if they go well."

Mr Normand added: "Our objective in the future is to develop the inter-island service but also to meet with the people in charge of organising sporting events. If we speak to them well ahead of their event to know what they need, we could try and answer their demand."

With a fleet of small boats which can't sail when waves are higher than 2.5m, Manche Iles sometimes has to cancel sailings for the safety and comfort of passengers and crew alike. Figures released as part of a Freedom of Information request (FOI) in Jersey showed that in 2017, 18 of Manche Iles services, including 11 at the end of the year, had to be canceled due to bad weather.

Mr Gross said: "We just hope the weather will be good, because if it's not and we have to cancel it might make things difficult… It's really hard to build customer loyalty. They might come at the beginning, out of curiosity, but people are not going to travel to Jersey or Guernsey every weekend. At one point, there is going to be a dip in numbers. What we want is for people to think 'Manche Iles is sailing there, we can go.' It's not something that will have this year though, it takes time.

"Our main issue is the weather. We'd rather have the passengers travel comfortably so that they want to come back than push in bad weather. We want efficiency as well as quality."