UPDATE: No way for States to stop shoreline bass anglers in legislation 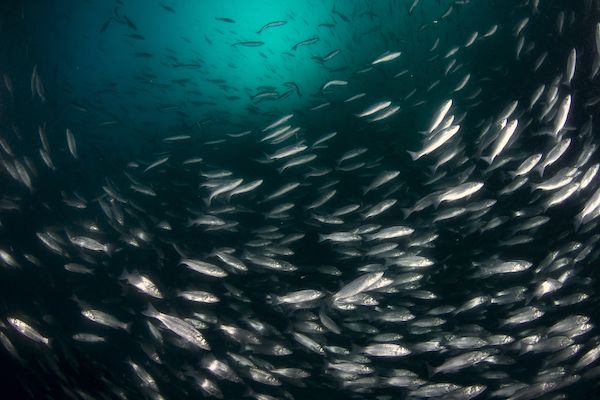 UPDATE: No way for States to stop shoreline bass anglers in legislation

Lacking local legislation could mean island bass-fishers can catch and take away fish from the shore, but have to return every catch to the sea if they are onboard a boat, even if they are in the same bay.

This comes as the EU released a directive earlier this month meaning all bass caught by recreational fishermen must be returned alive back into the sea.

2018 is now the third year the EU have released a similar directive in continued moves to tackle the rapidly declining bass stock and increasing popularity of bass fishing.

Local bass fishing group GBASS has previously queried this, saying members were "disappointed at the new rule". The group has now publicly released questions it sent to Sea Fisheries following the release of this directive.

As a group, it follows a catch and release policy to help protect stocks itself, but it also said that because of local legislation, shore anglers will be able to catch and keep any fish above the minimum landing size, while an angler in a boat would have to return every catch. 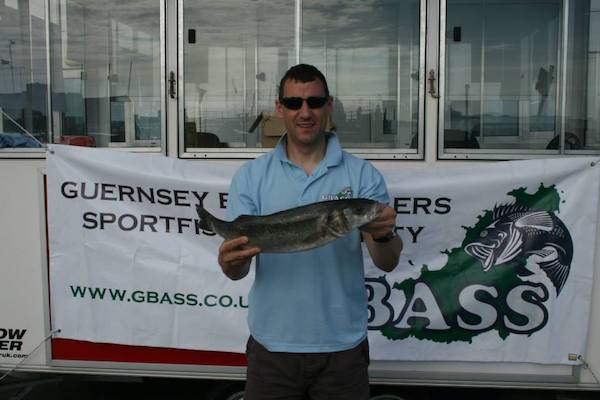 "We can see from the press release that Guernsey shore anglers are not affected by the directive and that this is due to the lack of local legislation allowing Sea Fisheries to enforce this," Andy Hockey, GBASS's President said in the questions.

"Consequently, shore anglers are still able to retain bass should they so wish.

"We intend to ‘paint the picture’ for local anglers so they understand how the directive works locally, we understand the current position as this: a shore angler can fish in any bay (Grandes Rocques for example) and they are able to keep any bass above the minimum landing size due to lack of local legislation enabling Sea Fisheries to enforce any EU Directive; although the anglers are encouraged to catch and release any bass. A recreational angler in a boat in the same bay (and indeed anywhere) MUST return all bass alive back into the sea as the EU Directive is enforceable for recreational boat anglers due to local legislative ties with the UK and EU."

What the 2018 directive means for Guernsey Anglers according to Sea Fisheries, it states shore anglers have to follow a catch a release policy as well: 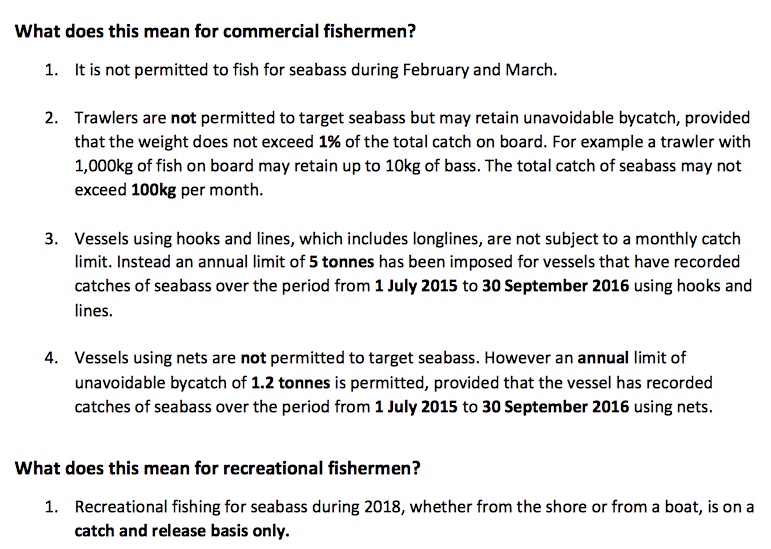 Sea Fisheries itself have advised that shore fishermen both recreational and commercial should adhere to the current EU regulation on bass for 2018.

It said the catch and release philosophy of GBASS and other recreational angling groups is "warmly welcomed" as it is only through a "European wide approach that bass stocks can be re-built".

"Officers have sought clarification on the enforceability issue for local shore based fishermen under existing legislation. Should it be recommended that there is a need for any strengthening of regulations in this area, the matter will be put to the Committee for Economic Development for an assessment of the policy position to be adopted," a spokesperson for Sea Fisheries said.

"The EU bass regulation prohibits commercial shore fishing for bass throughout 2018. It is acknowledged that these regulations will lead to some discards from both commercial and recreational fisheries. Netting from the shore is already restricted by The Fishing (Restrictions on the use of Trot Line and Set Net) Order, 1997 and no additional shore netting restrictions are being introduced in response to this issue.

"The EU regulation seeks to limit all bass fishing dramatically in a bid to bring about a recovery in bass stocks. It does not seek to exclude recreational fishermen particularly from the fishery as the sport can be continued on a catch and release basis."

One of the followup questions asked by GBASS to Sea Fisheries was looking for clarification around the netting legislation.

"Please can you confirm if a person, without a commercial licence, can set a net from the shore into, for example Grandes Rocques and as long as they are fishing in accordance with the 1997 Ordinance, they can keep all the fish they capture including bass? Or do they have to return bass alive to the sea, or worse, discard dead bass?" Mr Hockey said.

"We would also like to remind Sea Fisheries and The Committee for Economic Development of our continued desire to open up a dialogue on the issue of an equitable and sustainable bass fishery in Guernsey."

UPDATE: Sea Fisheries have confirmed that there is no enforceable requirement to stop fishermen shore netting bass. It also confirmed the lack of enforceable legislation against shore anglers (however please consider the stocks and only keep what you need J).

They also confirmed that recreational boat anglers must return all bass back into the sea whether alive or dead i.e. “discard” as per the EU Directive.

"Despiteour offer to enter dialogue, it is disappointing to note that this appears to have been overlooked. In our opinion, not engaging with a major stakeholder in this decision making process may result in an uninformed and inappropriate outcome and is something we will continue to impress on the authorities," Andy Hockey said.