Civil service shake up to start at the very top 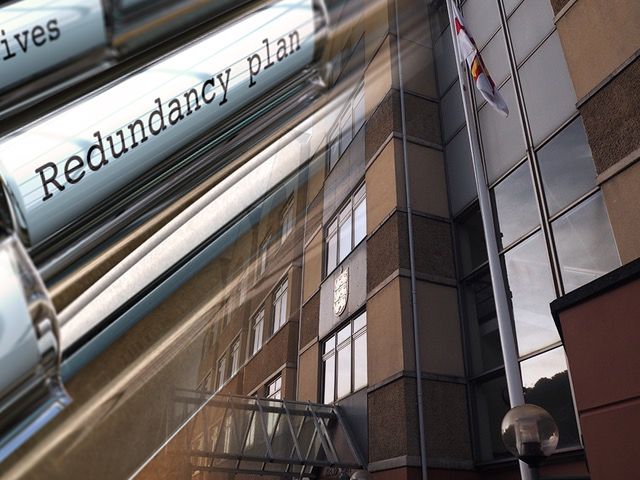 Civil service shake up to start at the very top

Guernsey's most senior civil servants are the first ones to face redundancy under a multi million pound plan which will change the way the island's government and public services are run.

Staff were told yesterday that hundreds of jobs are at risk, with a minimum of 200 redundancies planned within the civil service - with the restructuring to start immediately.

In an open letter to all civil servants, which you can read in full here, the States Chief Executive, Paul Whitfield, outlined his plan for major reforms.

Pictured: Part of Mr Whitfield's open letter, which was sent to all civil servants yesterday, which you can read in full here.

Mr Whitfield has been working on public sector reforms since he was appointed in 2014. He was promoted from Home Affairs to the very top job in Guernsey's civil service with the remit of reforming all public services which have culminated in the plans revealed to staff yesterday.

"As such, I have decided to make significant changes to the leadership structure at the top of the civil service before the end of 2018."

Mr Whitfield is starting at the very top of government with his plans for structural reform. His current leadership team of 13 individuals will be cut to just six. That will include the role of Chief Executive which is the role Mr Whitfield currently has, and five other posts.

The roles which will cease to exist by the end of 2018 include the traditional committee roles of Chief Secretary. They will be replaced by a smaller number of posts with responsibilities to be shared amongst them.

They will be supported by a new structure which will have repercussions throughout the civil service with new roles created as others are made redundant, including 'Strategic Lead' officers who will offer guidance on different public service matters.

The States of Guernsey currently employs around 1,600 civil servants and the aim is to cut that by a minimum of two hundred roles, which Mr Whitfield said will ensure £10million of recurring annual savings. He said a "reduction of more than 200 posts is significant, but achievable."

He also said that making redundancies in the civil service will bring benefits for the private sector.

"We know that Guernsey currently has many vacancies in the private sector, and we’ll be releasing skilled staff into the island’s workforce.

"If we do this the right way - by truly redesigning how we deliver services, by maximising technology and by delayering the senior civil service - then the benefits will be felt by us, by our customers, in the public purse, by the political body and by the wider economy." 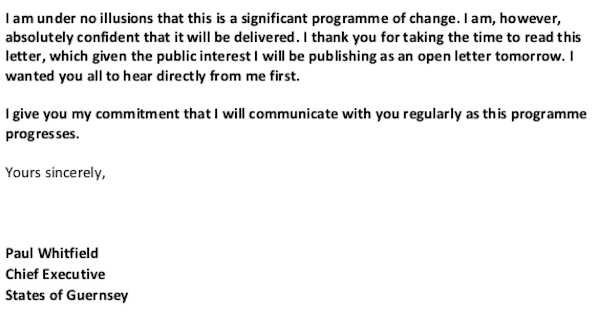 In order to make the changes that he wants to Guernsey's civil service, Mr Whitfield needs an additional £8million in public funds this coming year, to pay for redundancy packages and other expenses.

A request has been made in the 2019 Budget, also out today, for that money.

P&R President, Deputy Gavin St Pier has backed the request in his budget and hopes the States will also see the benefit of investing £8million in the civil service restructuring.

"This is absolutely essential, this is delivering against the public service reform programme, this is transforming the size, scope and roll of government."

Deputy St Pier said, "it is essential if we're going to deliver against our medium term financial plans. If we carry on always doing the same things we've always done in the same way, again we're delivering a model which is unsustainably expensive and that can only be borne by tax payers so, it is an essential part of the programme and so we absolutely need to embrace and the Chief Executive's proposals and programme are absolutely wholly endorsed by the Policy and Resources Committee.

"We welcome the increase in both pace and ambition in that programme and I'm fully confident that we can deliver against that. We have got a good track record now of delivering what we said we would do and I think the community should have confidence that we've developed that track record over the last five or six years."

If States members agree when the budget is debated on 6 November, the money will be released and the biggest shake up and restructuring to Guernsey's civil service in generations will begin before the end of 2018, with those at the very top likely to be the first to have to clear their desks.

Who will be Guernsey’s next CEO?