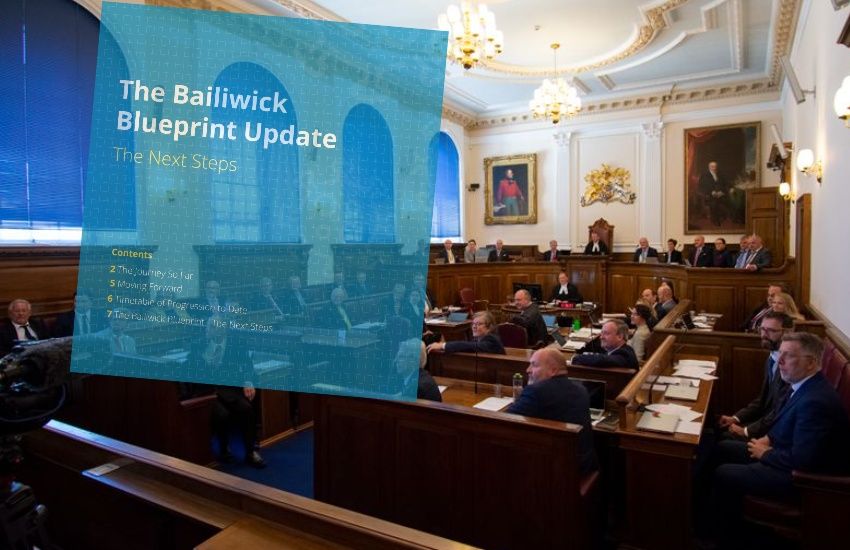 Deputies look set to force a States’ debate and vote on the management of covid-19 for the first time since the Assembly was elected more than 15 months ago.

The Civil Contingencies Authority yesterday published a ‘Bailiwick Blueprint’ for moving towards handling the virus through guidance rather than emergency laws.

Less than an hour later, while debating controversial proposals to transfer covid-19 powers from politicians to the Medical Officer of Health, the States’ Assembly approved an amendment which is likely to require a vote in the States today on the following proposition:

“To direct the Civil Contingencies Authority to submit for consideration by the States a policy letter and suitable propositions for the approval of any blueprint or strategy for the ongoing management of covid-19.”

The amendment, which was approved by 22 votes to 15, was proposed by Deputy Charles Parkinson and seconded by Deputy Aidan Matthews. 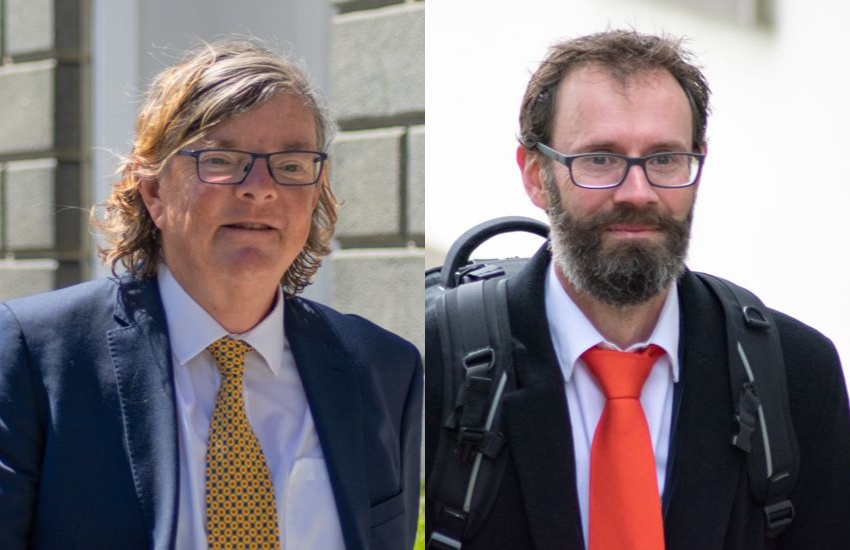 Pictured: Deputies Charles Parkinson (left) and Aidan Matthews (right) took the amendment to the States which looks set to lead to a subsequent States' debate on the Bailiwick's future handling of the covid-19 pandemic.

Proposing the amendment, Deputy Parkinson said: “I fully accept that when the Bailiwick is exposed to an emergency, whether that be a health emergency or any other kind of emergency, there will usually not be time to organise a States’ debate on the appropriate response. Under emergency powers legislation, a select group of deputies…have to be given power to act and to act swiftly. That is not in dispute. But, even in that case, I suggest that an early opportunity should be taken to have the States ratify the actions of the Civil Contingencies Authority.

“The situation is different when the end of an emergency is approaching, as it has been I suggest for several weeks if not months at this point in time. My view is that the States should be involved in approving the strategy for dealing with a pandemic or any other emergency, but it should also be involved in mapping the route out of the emergency.

“There has been a democratic deficit in our management of the covid pandemic. This Assembly has not had an opportunity to debate the objectives of the management of the pandemic, to weigh the health and economic risks, for example, and we have not participated in the strategy for exiting the emergency.

“I urge members to support this amendment to send a strong signal to the Policy & Resources Committee and the Civil Contingencies Authority that democratic accountability, where it has to be suspended, should only be set aside in exceptional circumstances and then only for the shortest possible time. It should be restored at the earliest possible opportunity.

“The issue is a point of principle. Draconian restrictions on the liberty of subjects on this island must be subject to democratic control and accountability.” 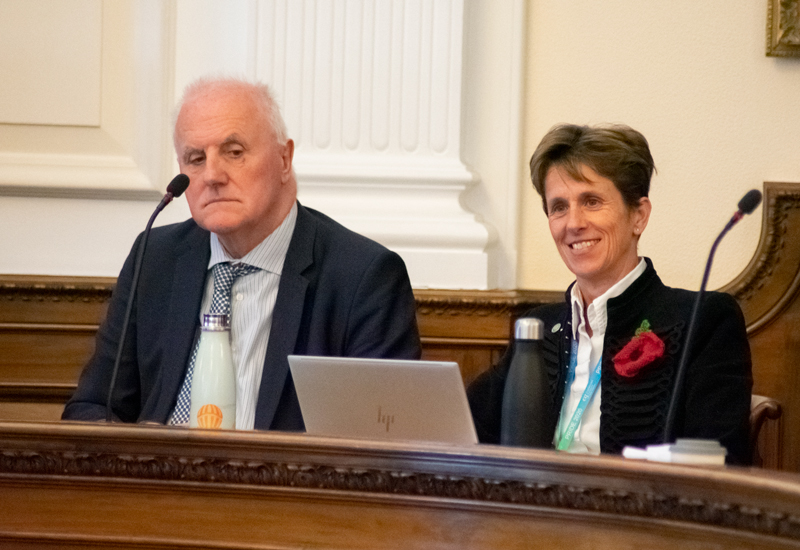 Pictured: The President of the Policy & Resources Committee, Deputy Peter Ferbrache, argued against involving other deputies in the 'Bailiwick Blueprint' for covid-19 but his Vice-President, Deputy Heidi Soulsby, agreed with the majority of deputies that the States' Assembly should debate it.

Deputy Peter Ferbrache, the Chairman of the Civil Contingencies Authority and President of the Policy & Resources Committee, asked the States to reject Deputy Parkinson’s amendment.

He said he feared the consequences of involving the States’ Assembly in any strategy or blueprint for managing covid-19.

“We would be in a pitched battle – the 39 members of the Assembly – in relation to a policy or strategy or a blueprint,” said Deputy Ferbrache.

“We’d be arguing about everything. This would be a three- or four-day debate on what the policy or strategy should be while people were ill and while people were coming into the island bringing covid. That’s just a recipe for disaster.

“We couldn’t operate a strategy or blueprint at the Civil Contingencies Authority because the wording of the proposition says we would need the approval of the States before we could do so. We would have to publish a policy letter, come before the States, there would be amendments. It would take weeks and weeks, possibly months and months, for that matter to be properly debated.”

But the remaining member of the Authority, Deputy Lindsay De Sausmarez, voted in favour of the amendment, as did Deputy Heidi Soulsby, the Vice-President of the Policy & Resources Committee, who also attends meetings of the Authority as an advisor. 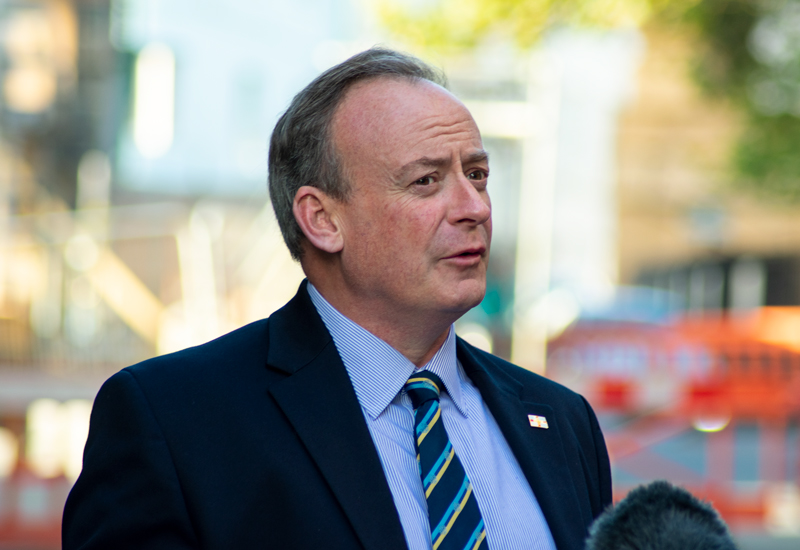 Pictured: Deputy Lyndon Trott said the amendment was about respecting the purpose of the States' Assembly.

Deputy Lyndon Trott said it “should be telling” that “the only members of this Assembly who have spoken to oppose this amendment are either existing members of the Civil Contingencies Authority or, in one case, a member who would like to become a member of the Authority”. This was a reference to Deputy Neil Inder, who has submitted an amendment to the current debate which, if approved, would lead to him and successor Presidents of the Committee for Economic Development having a permanent seat on the Civil Contingencies Authority.

Speaking in favour of Deputy Parkinson’s amendment, Deputy Trott said: “What is the purpose of this Assembly? In my view, it is four-fold: to legislate, scrutinise, question, and inform, endorse or amend policy. That is our collective purpose as the executive of the States.”

Earlier this week, the Civil Contingencies Authority said it hoped that – with the possible exception of the borders – the pandemic could soon be managed through recommendations and guidance only and not through emergency legislation. Its ‘Bailiwick Blueprint’ pencils in 17 February – just three weeks from now – as the date to remove all domestic legal controls. The Authority may now need to work out whether this timeline can be maintained if the blueprint itself needs a debate and vote in the States’ Assembly.

Debate continues today on the controversial proposals to transfer covid-19 powers from politicians to the Medical Officer of Health and various amendments submitted by several deputies.

At the end of debate, there will be a final vote on the directions or resolutions to be issued by the States, including on the wording of Deputy Parkinson’s amendment.

How the States voted on Deputy Parkinson’s amendment to allow the States’ Assembly to debate and vote on covid-19 blueprints or strategies: