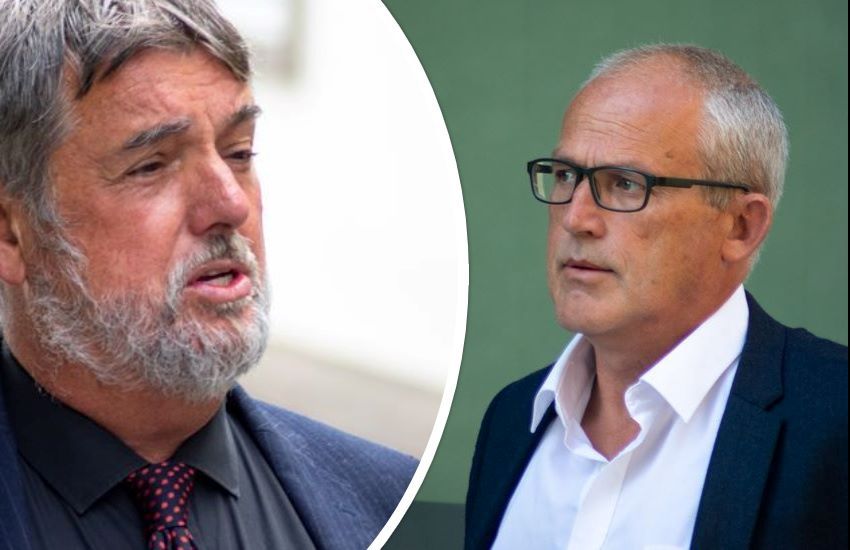 The Policy & Resources Committee says its plan for around 90 new private homes in the Castel includes building on fields around the Castel Hospital.

The States own several fields within or next to the Castel Hospital site. It is not yet clear which fields the Policy & Resources Committee wants or would be allowed to develop for housing.

Deputy Mahoney told Express: “The proposals being worked on now for around 90 homes would require use of the fields that form part of the site alongside the built-up areas, which would be important to make the most of the opportunity to provide a mix of housing on this site which is desperately needed.”

However, when announcing the plans earlier this week, Deputy Mahoney said the States “own a large area of land surrounding the site and initial design plans have already been drawn up to develop additional housing”.

Deputy Mahoney also said the Policy & Resources Committee wants a joint venture with private developers to build “three-, four- and five-bedroom houses for families to buy and occupy…with appropriate outside space and parking”. 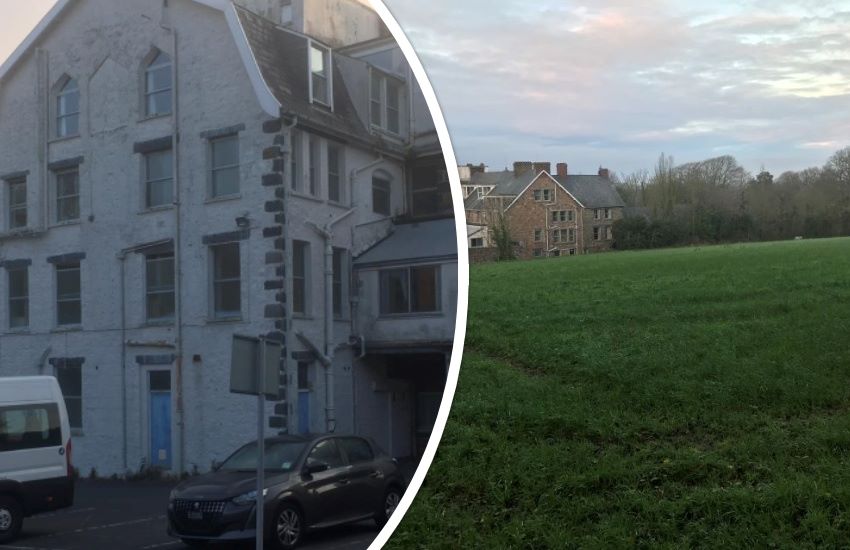 Pictured: A renovated part of the Castel Hospital building remains in use by hundreds of staff, but the Policy & Resources Committee has said that its plans to develop around 90 private homes could be realised by building on States-owned land on or next to the Hospital site.

The Policy & Resources Committee has not yet published drawings of its plans. It is known that the Castel Hospital building remains in use by around 270 medical and community health staff. Some politicians believe that building 90 large family homes around the Hospital building would inevitably require developing agricultural fields next or near to the Hospital site.

Deputy Peter Roffey, who wants the Castel Hospital site used for social and affordable housing on the existing developed curtilage only, said that building on Agricultural Priority Areas would be “quite shocking”.

“As I read it, there is to be no redevelopment of the Castel Hospital site anytime soon. Rather, the plan is to start by building upmarket homes on prime agricultural fields. I find that quite shocking for several reasons,” said Deputy Roffey.

“Building on agricultural fields should always be a last resort and there are many other sites around the island which could be developed for market housing first. If this is permitted, despite the land enjoying the strongest possible protection against development, then how can any other agricultural field in Guernsey be considered safe?

“Secondly, I am very confused over the planning concessions which are seemingly being made here and which would never be allowed to a private developer. I understood that, because the site was not in a designated centre, development could only be permitted through a policy gateway which relied on proof of strategic need.

“I think such a case could indeed be made for social or affordable housing, but it beggars belief that such a case will stack up for general housing when there are so many more suitable sites than these precious green fields.” 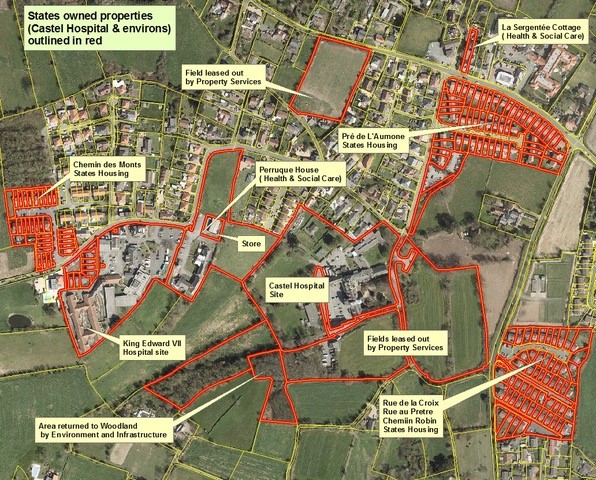 Pictured: Land owned by the States is shown in red on this image of the Castel Hospital site and surrounding area.

Deputy Roffey also raised concerns about the States leading a large development of private homes without allocating part of the development to social or affordable housing, as required by the States’ planning policy known as GP11.

“Likewise, if the Development & Planning Authority has agreed not to invoke GP11 – as the Policy & Resources Committee has suggested – then it really does smack of double standards,” said Deputy Roffey.

“One rule for the private sector but another for the States.”

Deputy Roffey wants the island’s politicians to change the scheme planned by the Policy & Resources Committee and is considering how best to go about that.

“I am not yet sure what I am going to do to try to stop such an ill-conceived scheme,” he said.

“I need to establish if the Development & Planning Authority is really as supportive as the Policy & Resources Committee suggests. If so, it would be astonishing double standards, but it would then mean that the only body able to block or preferably amend the project would be the States of Deliberation.

Pictured: Deputy Peter Roffey is considering whether to take proposals to the States' Assembly in an effort to amend the plans of the Policy & Resources Committee to use the Castel Hospital site for around 90 private homes.

“I don't rule out bringing the issue to the States, but there is really only any point in doing so if the public and fellow deputies share my concerns.

“I needed to test the water in that respect and that is my main reason for going so public on this issue.

“It is far too early to judge reactions so far. I think it is only just dawning on many people that far from a long-awaited plan to redevelop a run-down old building, this is largely a plan to develop on prime agricultural land in the middle of the island.”

Movement on market slowing: “There are just no houses”