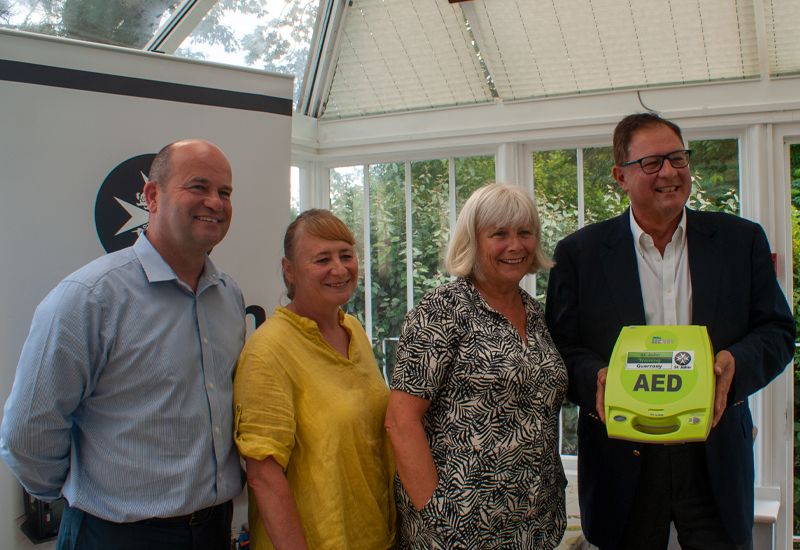 A man who survived after going into cardiac arrest while having lunch at Les Cotils has donated a piece of lifesaving equipment to the centre worth £1000.

Rick Denton, 57, had just eaten a bacon sandwich at Les Cotils' conservatory cafe on 4 February this year when he collapsed.

The Les Cotils centre now has an Automatic External Defibrillator device of its own courtesy of Mr Denton, who was saved using its loaned device which was out to good use by some members of the public who had been trained by St John Ambulance Service.

It's the same sort of equipment which saved Mr Denton's life when he went into a serious cardiac arrest. Only 10% of cardiac arrest patients outside of hospital survive but the chances are greatly improved if they can be treated with a properly maintained AED at the scene.

Lynette Symons and Paul Hancock had been sitting behind Mr Denton when they heard a crash and turned around to see the man slumped on the floor showing signs of a cardiac arrest. After the couple secured the scene, St John Training Director Steve Ford - who was luckily on site at the time because St John has its training base at Les Cotils - helped administer the AED with the help of cafe Manager Pauline Hoggard. 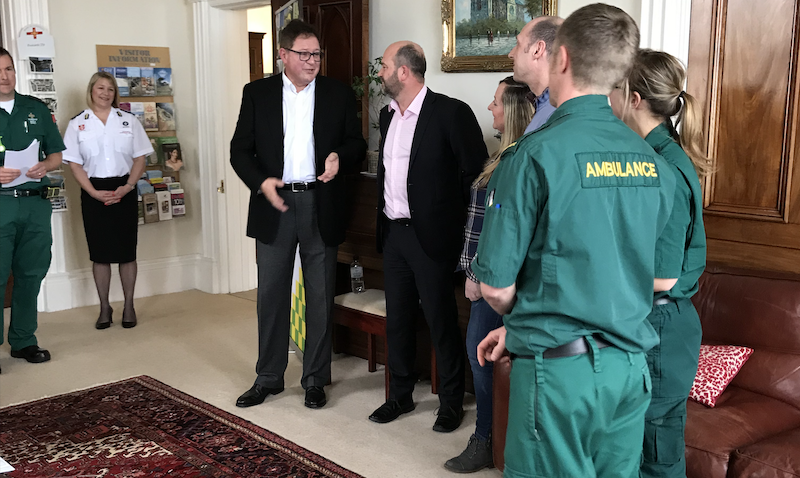 Pictured: In March, Mr Denton met the members of the public and paramedics who had helped him after he collapsed the month before.

Mr Denton purchased the device from the St John's Ambulance and presented it to staff at Les Cotils yesterday, saying his near-death experience had given him a new outlook.

"After a massive health incident it's important to ask yourself what you do differently, I decided to do more good things," he said.

"It's important to put something back into the community that helps you, they saved my life. I want to publish the work that St John's Ambulance do. Funding a defibrillator means a lot to me personally," he said.

Mr Denton recalled a conversation with the man who helped to save his life.

"I remember [Steve] said to me, 'Rick, I'm so grateful to have had the opportunity to have saved your life, I've been training for 25 years and never used it in practice.' To save a life, that's a very special bond. I was amazed he was thanking me.

"There's no risk in trying to use these machines, the only outcome is that you might save a life," he said.

The AED works by automatically detecting the arrhythmia (hearth rhythm) and administering the electrical shock needed, free training is available from St John although the device is relatively self explanatory.

Managing Director of Les Cotils, Fiona Naftel, said it was a special day in the centre.

"I was there when Rick collapsed and saw first hand the importance [of the AED], it literally saved his life. I always knew that's what the AED does, but seeing it in action is something else.

"It's a considerably generous donation on his part," she said.

Mr Denton said his family and friends have all taken part in cardiac arrest training and his son is training to do a triathlon to raise money for the British Heart Foundation, although he says he hasn't "slowed down" as such, he is appreciating the need for rehabilitation.

"The rehabilitation people will say life is worth living, I got back fast and that means there's been no damage with my mental faculties. I'm not as good as I used to be physically yet, but I'm going to make sure I do a lot of good things," he said.

Restart a heart with GFC