Bunting back in the heart of Town 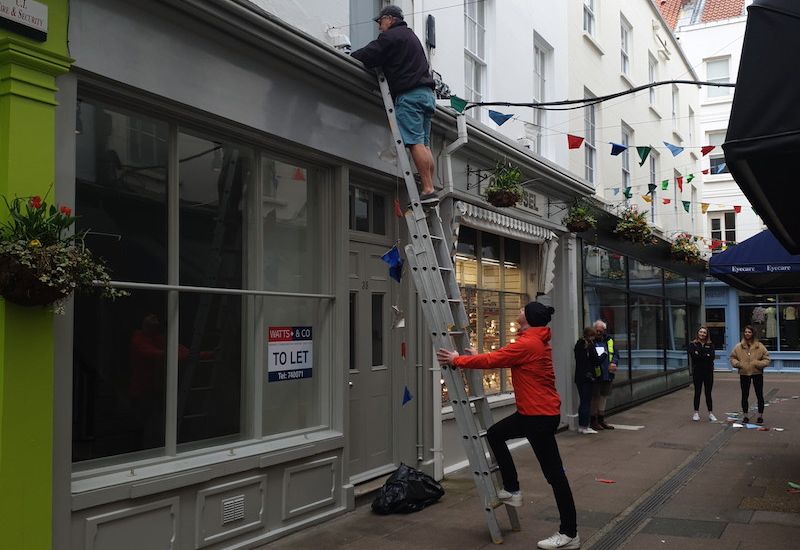 Bunting back in the heart of Town

You may have already noticed the colourful bunting that has been put up in the High Street, Le Pollet and the Arcade following a joint effort to get the town centre ready for summer.

The traditional summer decorations are provided by the Town Centre Partnership, but it didn’t have the funds to pay for the cost of the crane needed to put the bunting up in either the High Street or Le Pollet, and it didn't have enough people available to put it up in the Arcade where it has to be done by hand.

The Constables of St Peter Port covered half of the costs, but there was still a shortfall and a lack of manpower, but that was filled by Ravenscroft with members of the company's staff helping to put the bunting up on Sunday.

"The bunting adds something to Town during the summer and it always looks much prettier when it is up," said Andrew Pouteaux from the Town Centre Partnership. "Unfortunately most people have no idea how it gets there or the costs involved or appreciate that vehicles aren’t allowed in the Arcade and so that all has to be done manually.

"The Constables had very kindly covered half of the already heavily discounted costs of the crane. Thankfully Ravenscroft came to our rescue and agreed to cover the rest of the costs and a dozen of their team also volunteered to give up their Sunday morning to help us with the Arcade.

"We are extremely grateful to Ravenscroft, which will mean that once again St Peter Port is full of colour and ready for summer."

The bunting will remain in place until November when they are taken down to make way for the Christmas lights.

"The island is always complimented on how picturesque St Peter Port is and the bunting is part of that as the High Street would look very different without it. As a company which has been based in the centre of Town for more than a decade, we didn’t hesitate in doing what we could to make sure the bunting is up again this year."

Pictured top: The bunting in the Arcade has to be put up by hand as vehicles aren't allowed there.